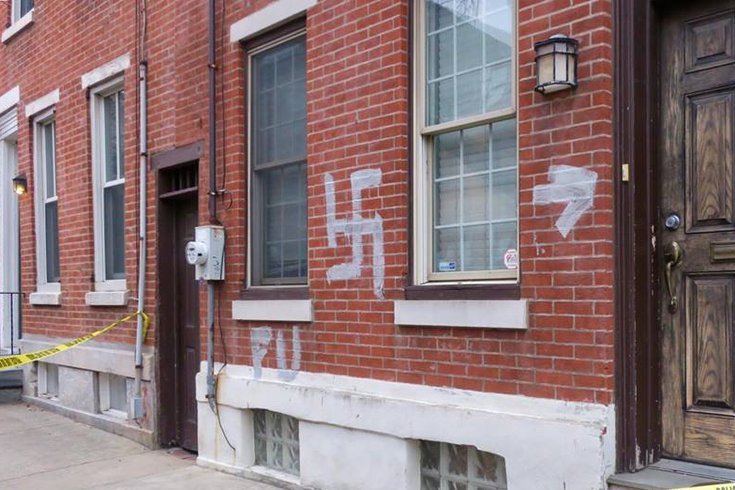 This graffiti was spray painted on the side of a residence in Northern Liberties sometime before Tuesday morning.

Hateful messages and a swastika were found painted on the front wall of a residence in Northern Liberties on Tuesday morning.

The symbol was painted on a row home on the 900 block of North Fourth Street, along with an arrow pointing toward the residence's front door. The letters "F U" also were written on the building. According to online real estate postings, the house is a rental unit.

A Philadelphia police spokesman confirmed they are aware of the incident. Police are investigating and are expected to release more details soon. Northern Liberties resident and Temple University journalism professor George Miller snapped a photo of the graffiti shortly before 9 a.m. Tuesday morning.

MORE NEWS: Nor'easter's 1-2 punch: rain, sleet, gusty winds and as much as 14 inches of snow

Matt Ruben, president of the Northern Liberties Neighbor's Association, is a lecturer at Bryn Mawr College. He said he had been on his way to give a speech about scientific racism Tuesday morning when he was contacted about the graffiti.

While he hadn't been made aware of specific details regarding the vandalism, Ruben said he hoped everyone in the city would be "outraged" over the display.

"Northern Liberties, for the nearly 20 years that I've been there, has always been a welcoming and tolerant and diverse community, with an overwhelming majority of people who are appalled by any hate crime or expression of hate or bigotry," he said.

"Unfortunately, we are at a time in our country when people espousing hate feel emboldened," Ruben added. "We don't know who did this or why, and I don't know if we'll find out, but all we can do is continue to embrace diversity and welcome everyone and speak out against this."

This story is developing. Check back later for updates.