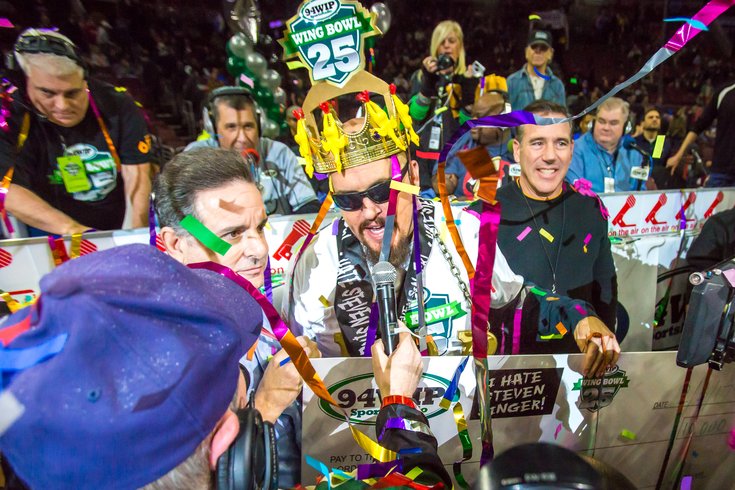 In the 25th edition of SportsRadio 94 WIP’s Wing Bowl, a new champion was crowned: Notorious B.O.B.

After overcoming a 17-wing deficit through the first 14 minutes of eating, he outpaced second-place finisher Tiger Wings & Things, by 32 wings in the second 14-minute round to take a 15-wing lead heading into the finals.

And in the two-minute lightning round, he didn’t let up.

Notorious B.O.B., who became just the third Pennsylvania resident to win and the first in the last 20 years, finished with 409 wings eaten, 20 shy of the record set by Molly Schuyler last year. He won a Hyundai Santa Fe, $10,000 in cash, a medal, and a championship ring. He was also the legends winner and took home a Harley-Davidson FLSTF Fat Boy Motorcycle.

"It took a while, but it was worth the wait," said B.O.B., who is actually Bob Shoudt of Royersford. "This was the event I wanted to win since I was a kid."

Shoudt, who at 50 years old became the oldest winner in Wing Bowl's 25-year history, is a part-time competitive eater but told WIP after his win that the second income has helped him do things like put his son through seminary school.

“I don’t know if this will be the last one,” WIP Morning Show host Angelo Cataldi told the crowd as he signed off from the broadcast, “but it might have been the best one.”

In addition to the main event, there was also a five-minute eat-off between Schuyler, the reigning champ, and Wing Bowl legend Bill “El Wingador” Simmons. Schuyler beat Simmons by four wings, 95-91. But that wasn’t all for the tiny mother from the midwest. She also broke her own personal record by eating five-and-a-half pounds of food in less than 3:22.

The Wingette of the Year went to Cathrine (from New Jersey), who said she plans on using her $5,000 prize to help pay for school.

Wingette of the Year, Cathrine, with he $5k prize #WingBowl pic.twitter.com/FeH2NH0wUg

There were appearances by legendary wrestler Ric Flair. The Nature Boy seemed to be doing just fine.

And Coolio, who sang Gangsta's Paradise while wearing a No. 25 Sixers jersey and made my inner-12-year-old extremely happy, was in the house.

There was even a marriage proposal by one of the contestants, Charles “Eggman” Rifici.

There was a marriage proposal at #WingBowl. It was one of the contestants (Eggman). She said yes. pic.twitter.com/d8WfJA4Cfi