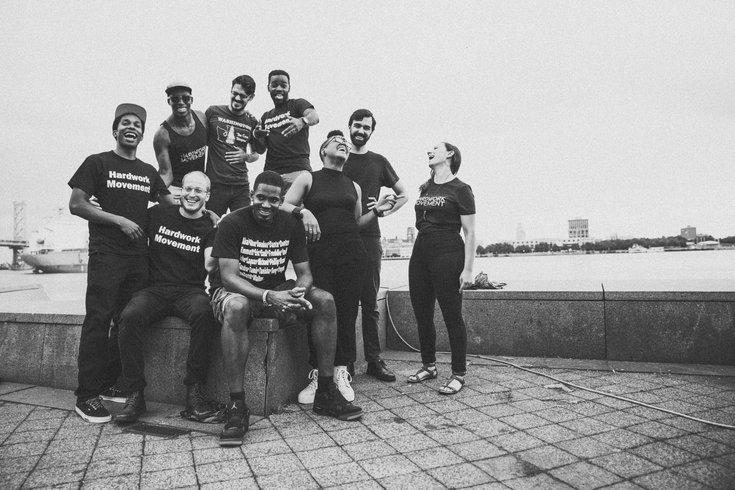 1. Hardwork Movement, “On the Rise”

Hard to miss the local love on this just-released jawn from the homegrown West Philly hip-hoppers [full disclosure: Some of these guys are friends of mine]. This finds the group’s MCs repping their city in a few dozen different ways – “from Rocky stairs to the mural arts” — over a smooth but spirited Philly-flavored soul-jazz groove. It sounds and feels like a well-deserved 2016 victory lap from a crew that has been gigging around town seemingly nonstop since dropping its full-length debut back in January — but the group is actually billing this as a taster for an “upcoming project,” while a Johnny Brenda’s gig this week is mysteriously listed as a record release show. Hmm…

Just one of the dozen searing, claustrophobic sound/word collage vignettes making up prolific Philly artist/activist/poet/noisemaker Camae Ayewa’s uncompromisingly political Don Giovanni Records debut, “Fetish Bones,” this one pares her frequently dense, reference-strewn poetics down to a few simple, sharply pointed phrases, the most central of which — “Everything ain’t OK” — sets the track up as something like a direct inversion of Kendrick’s “Alright.” Doubling Ayewa’s spoken words — and every bit as ferocious and harrowing — is the sampled, abstracted, almost wordless gospel testifying of some fervent, presumably bygone soul sister. And the abrasive industrial churn underneath doesn’t exactly lighten the mood either. Happy Halloween?

At just shy of two minutes, this is one of the longest cuts on Mannequin Pussy’s breathless, blistering new 17-minute punk opus, “Romantic” — and also easily one of the sweetest. When that upbeat, harmony-driven chorus drops in out of nowhere, it’s practically jangle-pop. In album context, it’s a major, much-needed moment of release, but even standing alone, those honeyed hooks make a potent contrast to the anxiety-ridden pummeling — sonic and lyrical — of the rest of the song.

“Romantic” came out last week, but M.P. won’t be back for a hometown record release show until playing Everybody Hits on Sunday, Dec. 4.

Allison Crutchfield ’s new backing band is called The Fizz, which fits perfectly with the giddy, effervescent sound of this first single from her forthcoming debut LP, due on Merge in January. Gleaming, synthy new wave pop isn’t exactly what we’re used to hearing from the West Philly transplant — who’s best known as the co-leader of indie-rockers Swearin’ and as half of P.S. Eliot alongside her twin sister (and now labelmate) Katie, aka Waxahatchee — but it turns out to be a fantastic fit for her voice, which is soft on the emotionally knotty verses but musters up plenty of gleeful spunk for the defiant taunts of the refrain. Nice video, too.

The lead track from this folksinger/songwriter’s new EP — out next week — is, above all, a simply strummed showcase for an instantly dazzling voice. Admittedly, that would probably be true of just about any song the Bucks County native put to tape. It’s quite an instrument: pure, powerful, lightly jazzy (the comparison to a young Joni Mitchell is basically inescapable). I might quibble with her metaphors (diamonds are unbreakable stones, after all) but it feels churlish to fuss in the face of such an earnest, emphatic and relevant message, delivered with an audible — confident, not compliant — smile.