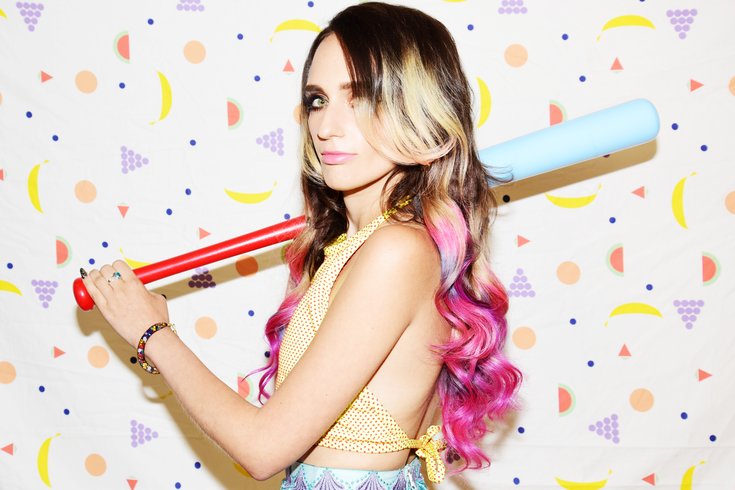 A perfectly turned bit of button-down folk-pop from the erstwhile Weakerthans frontman (and sometime academic) that starts out small — banal, even — with a novelty-seeming title and strangely earnest talk of dongles and PowerPoints. By the end of its three short, affecting minutes, though, the singer is entreating his protagonist (and, by extension, all of us) to “recommit yourself to the healing of the world / and to the welfare of all creatures upon it.” Quite an assignment — but darn if Professor Samson doesn’t have just the honeyed little hook to drive it home.

Speedy Ortiz frontwoman Sadie Dupuis, whom we can now proudly claim as one of our own — she moved to Philly in January — just announced her debut solo-project LP, “Slugger,” due in November, as well as a PhilaMOCA gig on Oct. 29. (Though, wouldn’t Everybody Hits be more fitting?) The lead single is this bubbly synth-pop jam, think The Blow not Kylie Minogue, which sets aside her characteristically oblique lyrical approach in order to deliver an emphatically clear, empowering message about sexual consent — a pointed corrective to pop’s typical aversion to the subject. Catchiness with a mission.

Curiously enough, our old pal Britney appears, briefly, to be advocating for a similar kind of clarity in communication — “Yes or no, but no maybes” — on the lead track of her just-released, largely low-key ninth album. (In full, the lyrics are mostly pro forma sexybabble, but at least her “yes” is loud and unambiguous.) It’s a striking (and indicative) opener for its softness and general restraint; an airy, diaphanous production that puts the focus squarely — refreshingly, in the context of Spears’ recent output — on the vocal melody, and a nicely quirky little melody it is, too.

“Mangy Love,” the fantastically named new album from this enigmatic songwriter (who plays Underground Arts on Oct. 14), is a treasure trove of moody, muted, slightly cracked gems. But this archetypically slinky, smoothed-out opening cut might just shine the brightest. The lyrics (when they’re intelligible) seem to riff on our culture of cyclical violence — always punctuated with the sardonic/ominous titular rimshot — although the real action is in that hypnotic, endlessly spiraling guitar figure and the understated, blissfully loping groove that accompanies it.

This London duo, who release their marvelously odd mini-LP “As I Lay Drying” this Friday, specialize in pleasantly drowsy, mildly electronic, wholly surreal assemblages of disembodied melody and found atmosphere. Like this one — which sounds vaguely like an anonymous doo-wop ballad that’s been slowed down, warped and waterlogged (á la The Caretaker, perhaps) and spliced atop some wan, numbly cheery Muzak, while assorted background squiggles help further the disorientation. Are you feeling sleepy yet?