All these numbers suggest Phillies should be losing ... yet they keep winning

Last week, I wrote a story about how the way in which the Philadelphia Phillies have been winning games is impossible to sustain over a full season.

The team then went out and dropped three of four games to the St. Louis Cardinals, followed by their series opener against the Marlins. But after taking the final two games against in Miami, the Phillies suddenly find themselves just two and a half games off the pace in the NL East.

If that's not where you thought this team would be one-fifth of the way through the season, you're not alone. When giving our official predictions for the Phillies 2016 season, just one of us predicted they'd win 70 or more games...

What will be the Phillies record in 2016?

Perhaps, though, this shouldn't be all that surprising.

Because the Phillies finished with baseball's worst record in 2015, it's easy to forget how different this team looked once Pete Mackanin replaced Ryne Sandberg as manager, especially in the second half of the season.

No. That's not a typo. They're actually a game over .500 since the middle of the 2015 season. I had to read it a few times myself; I even checked the math.

And while I was checking that math, I stumbled across some other numbers that caught my eye. And then some more. And then, despite my better judgment, I opened the Play Index on baseball-reference.com.

Here's a somewhat-random-but-sort-of-related collection of anomalies from my trip down that statistical rabbit hole...

[DISCLAIMER: Unless otherwise specified, the below stats are through play on Sunday, May 8th.]

•  Last season, the Phillies finished 9-69 when scoring three or fewer runs. They already matched that win total this season. It's May 10th.

•  In fact, of the 24 teams with better run differentials than the Phillies, only seven currently have a better record (Cubs, Mets, Nationals, White Sox, Mariners, Red Sox and Orioles).

Don't worry, this doesn't have anything to do with the length of the sides of a triangle. It does, however, have to do with the above stats and therefore, unfortunately, involves some math.

If you’re not familiar with this, it’s basically the expected record for a team based on how many runs they’ve scored compared to how many they’ve allowed. Here’s how baseball-reference.com explains it:

The traditional formula uses an exponent of two, but this has proven to be a little more accurate.

It’s not perfect, and each year there are outliers that prove this formula wrong. But consider this: 22 of 30 MLB teams are within one game (either positively or negatively) of their Pythagorean win total. Furthermore, 28 of the 30 teams are within two games of it.

Want to take a guess on which two teams — one better, one worse — are the outliers this year?

In each of the previous five seasons, only one team has outperformed their Pythagorean total by more than seven wins. And that was the 2012 Baltimore Orioles, who finished with 93 wins, 11 more than their projected total of 82 wins.

If they sound familiar, it's because that's the same Orioles team that currently holds the MLB single season record for win percentage in one-run games.

Are you starting to see how this is all related yet?

Greater than the sum of its parts…

As you can see from the numbers above, the fact that the Phillies are 18-14 through the first 20 percent of the season is pretty impressive. Or maybe you’re still just as confused as I am about how exactly they’re pulling this off.

Well, if you’re like me, prepare to be slightly more confused.

Take a look at where the Phillies rank* positionally in wins above average (WAA) -- it's kind of like WAR, but slightly different. [Here's a good breakdown on the differences between WAA and WAR and how each is both calculated.] 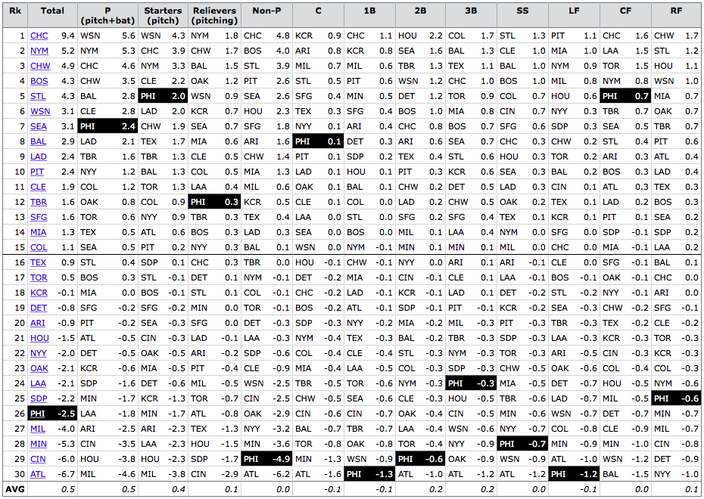 As you’ve probably noticed by now, their pitching has been a large reason for their early-season success. Unlike 2015, when their starters would routinely  give up 5-6 runs a night, leaving them with little chance to come back, the Phillies have found themselves within striking distance late in games. Take a look at where their staff ranks compared to the rest of the NL.

And now compare that to their offense, which ranks among the bottom two in the league in most categories...

Still, they're four games over .500 despite those offensive offensive numbers. Now just imagine what they’d be able to do if the middle of their order wasn’t hitting .226/.281/.382 so far this season.

I don't want to see what it would look like without Odubel Herrera's numbers (before he was moved to leadoff) in there. In addition to being the only position playing worth anywhere close to one WAA so far this season, he's also the Phillies' only everyday starter hitting above .270.

I stand by what I wrote last week -- that this winning can't last, even though it's been enjoyable to watch -- but I hope I'm wrong.

The longer this lasts the harder it will become to explain. And that's when baseball gets really fun.