Phillies may be the hottest team in baseball, but are they really this good? 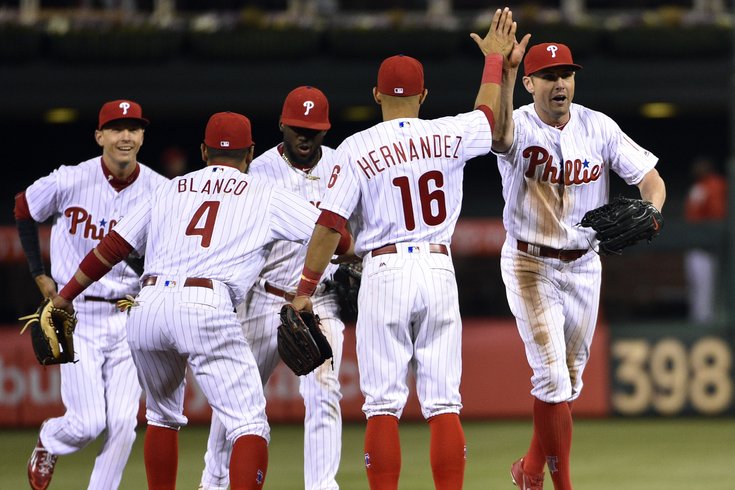 After back-to-back sweeps of the Nationals and Indians, the Phillies are 15-10. Seriously.

Even the most optimistic of Phillies have to be a little surprised by what the Phillies have done through their first 25 games of the season.

Picked by many to be in the running for the worst record in the majors prior to Opening Day, things got off to a somewhat predictable start with the team dropping its first four games. In the 21 games since, however, the team is 15-6, which is tied with the Nationals and White Sox for the second-best record in all of baseball over that span. Only the Cubs (14-5) have been better.

And because of that run — which includes wins in nine of their last ten games, capped off by back-to-back sweeps of the Nats and Indians — the Phillies suddenly find themselves tied with the Pirates for the second NL wild card spot as the 2016 season enters its second month.

The sample size may be small — and, as you’ll see, there's reason to believe a regression is on the horizon — but let’s not take anything away from what the Phillies have already been able to accomplish: surprising the hell out of everyone. To exceed expectations is one thing; to be mentioned in the same sentence as teams with World Series aspirations is something completely different.

Just don't expect it to last.

Although their record and current six-game win streak might have you thinking this rebuild could be over in short order, a deeper look at the numbers suggests that at some point — possibly sooner rather than later — Mackanin’s club is going to come crashing back down to earth.

It's going to happen.

As great as this streak has been, they'll have at least one equally long losing streak. Nine wins in 10 games? There will be a stretch of nine losses in 10 games. You can write that down. Just don't take this the wrong way. I'm not here to ruin your day or kill your Phillies buzz. I'm here to prepare you now so that when this young team hits a rut, you realize it's just that.

In other words, don't raise your expectations for this club because of their hot start. Here's why...

Through their first 25 games, the Phillies have failed to score more than three runs 16 times, tied with the Reds and Dodgers for the most in the NL. But while those two teams have combined to go 8-24 (.250), the Phillies are 8-8 (.500) in those games following their win on Sunday.

That's hard to do. For some perspective, let's send it out to our Phillies writer, Ryan Lawrence:

What was the Phillies record last year in games when they scored 3 runs or fewer. Really glad you asked: 9-69.

And if you want to put that in some historical context as well, there's this: since 1901, only two teams have finished a season .500 or better in games in which they scored three runs or less. The Cubs did it in back-to-back seasons ... in 1906 and 1907.

Still, manager Pete Mackanin isn't concerned that the numbers -- like the fact that his team's NL-worst 3.28 runs per game average -- lend to the argument that this kind of winning isn't sustainable.

"I choose not to look at it that way," Mackanin said Sunday after sweeping the Indians. "Those thoughts do creep in occasionally and we know we need a little more offense. But, pitching and defense wins games. That’s the old adage. As long as we’re in the game, we feel like we can win. Of course, I would like to get some more offense out of our guys. And I think we will, little by little.

"For right now, I choose to believe we’re as good as our record."

Perhaps Mackanin, who took over for Ryne Sandberg last season and received an extension in the offseason, finds it easier to believe the Phillies can keep this up because he foresaw it before the season even started.

"My goal is to keep games close enough that have a chance to win in the seventh, eighth or ninth, rather than get back in the game in the seventh, eighth or ninth. And I foresee us doing that," Mackanin said back on April 1st. "If a [Noah] Syndergaard or some stud pitcher throws a seven-inning shutout, but so does [Jerad] Eickhoff or [Aaron] Nola, then we've got a chance.”

And when you look at how the Phillies have been able to play themselves to a 15-10 record, the manager looks borderline prophetic: pitching, and winning close games.

But it's when you combine these splits -- their record in close games and record when scoring less than three runs -- that you truly begin to see just how unsustainable their current pace really is. It's why they're tied for the second-most wins in the National League despite having a minus-16 run differential, the worst among teams with winning records.

Offensively, they ranked near the bottom of the National League in most categories for the month of April.

But that was offset by the fact that their pitching ranked near the top of the league almost across the board, not to mention that their striking out opposing batters at a historic rate -- their 10.2 K/9 rate was the best ever in the month of April.

But perhaps the best stat related to their pitching staff doesn't even show up on here -- with an average age of 27.3 years old, they have the youngest staff in the NL. Also promising is the fact that their position players aren't far behind, with an average age of 28, fifth best in the NL and held back by the likes of Carlos Ruiz (37) and Ryan Howard (36).

That's the point of all this, isn't it -- turning the keys to the team over to the next generation of stars?

If you can remember that this is all part of The Process the Phillies rebuild, you'll be much better off. The worst thing you can do right now is to raise your expectations or begin to hold this team to a higher standard because they were able to win a bunch of close games in April. That wouldn't be fair to them.

They just aren't ready to contend -- that's not a bad thing -- and eventually their pitching will regress to the mean -- also not a bad thing. They've recently lost Charlie Morton to injury and opposing teams will be better prepared to face the young staff' second or third time they meet.

Furthermore, their lack of offensive firepower and inability to score runs means they need that pitching to keep them in games. And even if they're able to do that, it's not rational to believe they'll continue to win 80 percent of their one-run games.

The losing is coming, folks, although it may not be as bad as expected. But in the mean time, take this surprisingly hot start for what it is: a pleasant surprise.

Or, perhaps, a preview of things to come.