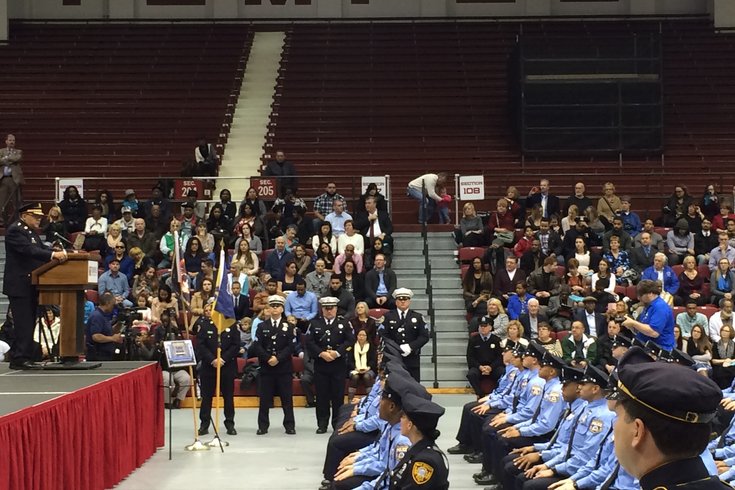 It was an emotional morning Friday for both Mayor Michael Nutter and Police Commissioner Charles Ramsey as the pair addressed their final class of officers to graduate from the city's police academy.

"Treat people as you wish to be treated, in every day and in every interaction," Nutter told the cadets.

In, what he called a "personal note,' Nutter said he had been proud to attend the graduations of officers throughout his eight years as mayor of Philadelphia and said he believes Mayor-Elect Jim Kenney will help build on the positive work he's done throughout his tenure.

"I have enjoyed every one of these," Nutter said. "We've had our ups and downs in this city. We've had our successes and tragedies ... But, no matter what else is going on, your first duty is to protect yourself at all times."

Ramsey too took a moment to speak from the heart, calling his speech a "bittersweet moment." But, he said, he believes the department will be in good hands when Richard Ross takes command of the force under Kenney.

"The department will be in excellent hands," Ramsey said. "He's a good man, a good friend and he's going to be an excellent commissioner."

Then, Ramsey discussed issues facing police throughout the country. He touched on how police are lately targets of criticism, sometimes rightly so, and told the young officers to not let what they hear in media or Internet chatter about police forces in other cities to distract them from doing their best to support the community.

"You're going to come in contact with people at their most vulnerable," said Ramsey. "Don't pre-judge. Do your jobs and be professional ... If you can do that, you're going to be just fine."

Talking about videos of police shootings that can be found on the internet and elsewhere, Ramsey said officers now are more scrutinized than anytime in his career, and officers need to think, every day, about what they are doing in every interaction with the public, because a "career is built one day at a time."

"In my 47 years of policing, this is the most challenging time that I have seen," he said, for police officers. "But, with challenges come opportunities. This is an opportunity to tell the world what we are all about."

Ramsey said that Philadelphia's police force is the oldest in the county, and officers need to remember that they share badge numbers with those who came long before them. It's those numbers, and the careers of those whose shoulders they stand on, that new recruits need to remember and honor as they enter the force, he said.

"It's not just about jumping over fences and all the things police do. It's about making a difference," Ramsey said. "It is really something special to be a police officer."