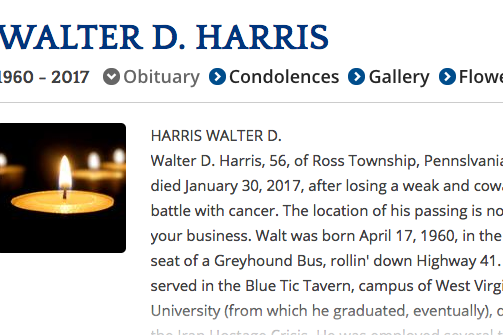 Pictured is a screenshot of the hilarious self-written obituary for Walter Harris of Ross Township, Pennsylvania.

Here at PhillyVoice, we have a thing for funny and heart-warming obituaries. From a booze-loving Irish father, to dueling obits from a wife and girlfriend, to the many who would rather die than deal with the 2016 presidential election (or its winner) any longer, the ability to find humor in something as difficult as death gives off a light in a sometimes dark and dreary world.

Which is why Walter D. Harris of Western Pennsylvania deserves notice. He died at the age of 56 on Jan. 30 after a "weak and cowardly battle with cancer," according to his obituary in the Pittsburgh Post-Gazette.

"The location of his passing is none of your business," the obituary deadpans.

The obituary was written by Harris himself along with a few of his friends, according to Pittsburgh's CBS affiliate.

One of those friends, Steve Barcley, told the news station that in a way, Harris was trying to teach the country a lesson by jokingly eulogizing himself:

“He had come to believe that people, at least in the United States, were taking themselves and their lives too seriously,” said Barcley. “It wasn’t meant to be an object lesson to anybody, I don’t think. It was meant to say, ‘I, Walt Harris, am not taking my life too seriously,’ even in his most serious moment.”

Even though Harris is a Steelers fan, he seems like he was a hell of a guy. Here's the rest of the Post-Gazette obituary:

Walt was born April 17, 1960, in the back seat of a Greyhound Bus, rollin' down Highway 41. Walt served in the Blue Tic Tavern, campus of West Virginia University (from which he graduated, eventually), during the Iran Hostage Crisis. He was employed several times over the years. He was an avid watcher rather than a doer. Mostly, he watched anything where they were keeping score. However, the Steelers were the love of his life. His personality was infectious, to the point of requiring Ross Township to impose a city-wide quarantine in 2013. Walt was a lifelong member of the Department of Redundancy Department, where he bore the honorific of "Most Redundant." He leaves behind a spacious, 3 BR apartment with hardwood floors and reasonable utilities. Walt is survived by his son, his mother, his former wife, three brothers, and by his favorite aunt. Walt is his mother's favorite oldest son. In accordance with Walt's wishes, there will be no visitation, funeral, graveside or memorial service. There will be a wake in the near future, assuming we get around to it, during which only Walt's CDs will be played. So, get ready for a lot of 17th Century chamber music! --"I'm Walt Harris, and I approve this obituary." Arrangements by BALL FUNERAL CHAPEL.

In the condolences section of the obituary, many noted that while they did not know Harris, they wish they had.

"I didn't know Walt but I sure wish I had the pleasure of meeting him," one commenter wrote. "Something tells me he would love to see how many people made smile one last time."

"It is the most inspiring obituary I have ever read," another wrote. "It has convinced me to write my own, you never know when you will need it."

Rest in peace, Walt, and thanks for reminding us all not to take ourselves so seriously.