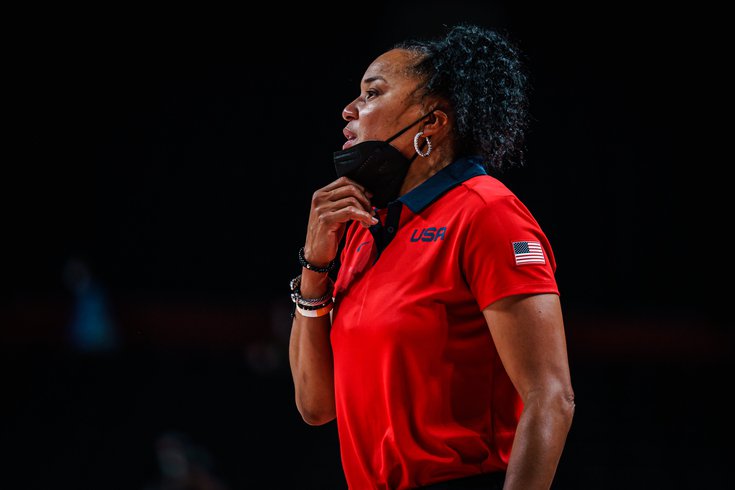 Dawn Staley said she is done as the head coach of the United States women's basketball team after leading the Americans to their seventh consecutive gold medal performance in the Olympics. Team USA defeated host Japan 90-75 to cap off another undefeated run at the Summer Games.

Dawn Staley became just the second person ever to win a gold medal as a player on the United States women's basketball team and later as its head coach when Team USA defeated Japan 90-75 on Sunday in Tokyo.

Staley's first Olympics at the helm will be her last, however. On Sunday, the North Philly native told ESPN she's "done" as head coach after leading the Americans to a seventh consecutive gold medal — and extending their unbeaten streak to 55 consecutive Olympic contests.

Staley spoke highly of her time with Team USA but said she has done all there is to do, according to Mechelle Voepel's report. After celebrating Sunday's victory with one of her former college players, 2020 WNBA MVP A'ja Wilson, Staley will return to Columbia, South Carolina, with the goal of leading the Gamecocks to their second consecutive Final Four and their first NCAA title since 2017.

How it started How it’s going pic.twitter.com/q5KimDgqQi

"It creates that like no other team you'll participate on," Staley said of Team USA's camaraderie in Voepel's report. "It's the very thing I try to coach my college team (to have.)"

A graduate of Murrell Dobbins Tech, Staley began playing for USA Basketball while in college at Virginia in the late 1980s and early 90s. She won gold medals as a player in 1996, 2000 and 2004. When her playing career ended, Staley began coaching with a stint at Temple in her hometown. She joined Team USA as an assistant coach for the 2008 and 2016 Olympics. In March 2017, she was named head coach — the successor to Geno Auriemma.

"To be part of the coaching staff there now feels like the natural progression for me. I’ve given a lot to USA Basketball, and USA Basketball has given a lot back to me," Staley said in her bio on the South Carolina athletics website. "I would do anything to ensure that our country is successful, because other countries are catching up. It’s in my blood to be part of USA Basketball."

Much of the hype surrounding the United States' dominant run in Tokyo was focused on the team's eldest stars, five-time gold medalists Sue Bird and Diana Taurasi, who many thought were playing in their final Olympics.

"The start of this winning occurred before them, but they finished it off," Staley said of Bird and Taurasi, according to Voepel's report. "They took it to another level. They are putting so much pressure on the next coach and the next players to perform at a high level."
Bird has said she will not suit up for Team USA again, but Taurasi chose to go with "See you in Paris" — the host site of the 2024 games — according to Voepel's report. Taurasi could have been joking, though, because when Staley announced her departure from the national team Taurasi reportedly followed by asking her coach and former teammate, "Does that feel good, Dawn?"