The variant mostly settles in the throat, nose and windpipe, but disease forecasters still predict a significant death toll 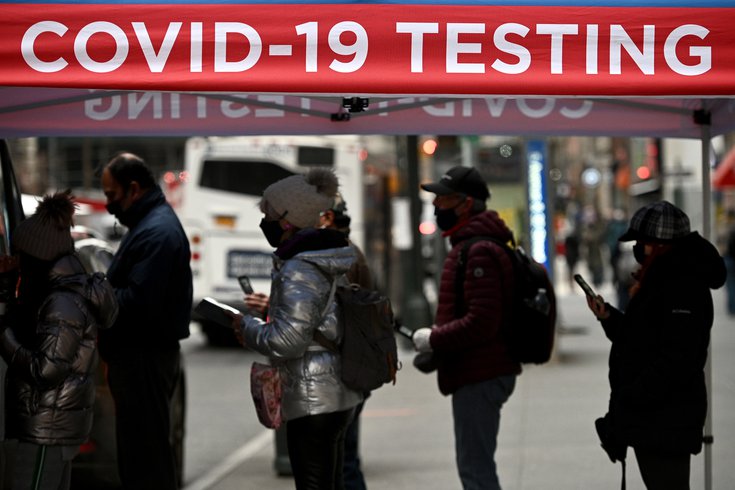 The impact of the omicron variant on health systems across the country has yet to be determined, experts say. Above, people wait in line at a mobile testing site across from the Empire State Building in New York City.

The omicron variant has been spreading like wildfire since the first U.S. case was identified Dec. 1, though it appears to be causing less severe infections than earlier coronavirus variants.

New COVID-19 cases are higher than ever. Hospitalizations also are rising, with unvaccinated people particularly vulnerable. But the hospitalization rate is not increasing nearly as fast as new cases, and deaths have trended downward recently.

The reasons behind the reduced severity are not entirely clear, but early studies suggest the omicron variant does not have the same impact on the lungs as prior forms of the virus.

New animal research shows omicron settles in the nose, throat and windpipe instead of the lungs. This leads to milder symptoms and less breathing difficulties compared to other variants, according to several studies of mice and hamsters.

One study found Syrian hamsters were less likely to lose weight, have significant lung damage or die compared to those infected with other variants.

"This was surprising, since every other variant has robustly infected these hamsters," co-author Dr. Michael Diamond, a virologist at Washington University, told the New York Times.

The level of omicron in the hamsters' lungs was no more than 10% of the level seen among other variants, the researchers found. Their results need to be confirmed in human studies.

Additionally, University of Hong Kong researchers have been studying the omicron variant using tissue from human airways. Data from 12 lung samples suggest that it grows more slowly in the lungs than other variants.

A protein found in the lungs may be playing a significant role in the reason omicron doesn't impact the lungs as severely, Dr. Ravindra Gupta, a virologist at the University of Cambridge, told the Times.

Gupta's team and a group of University of Glasgow scientists independently discovered that omicron does not attach well to cells with this protein. Cells in the nose, throat and windpipe, however, are less likely to have this protein and therefore are more vulnerable to infection.

"The result of all the mutations that make omicron different from previous variants is that it may have altered its ability to infect different sorts of cells," Deenan Pillay, professor of virology at University College London, told the Guardian.

"In essence, it looks to be more able to infect the upper respiratory tract – cells in the throat. So it would multiply in cells there more readily than in cells deep in the lung. This is really preliminary but the studies point in the same direction."

Though omicron may be less severe, it is still expected to cause a significant death toll.

Disease modelers predict that, in the best case, omicron will cause 50% fewer deaths in the U.S. compared to last year, STAT reports. But if more dire predictions come true, omicron could result in the deadliest phase of the pandemic.

Public health officials are still urging people to be cautious in their behaviors.

Though new research sheds some light on how omicron behaves, it is still too early to have a complete picture of the variant yet, scientists say.

Scientists know omicron has more than 50 genetic mutations. Some of them allow the coronavirus to attach itself more securely to cells and evade antibodies more effectively, which could help explain the large number of breakthrough infections among the fully vaccinated.

More data is needed to understand why omicron doesn't appear to cause the severe breathing difficulties, blood clots and organ damage that previous variants did. And studies still haven't addressed why omicron spreads so quickly from one person to another.

The largest missing piece of the puzzle remains how severe omicron infections are going to be. Data from three studies conducted in South Africa, Scotland and England suggest omicron is less likely than delta to cause infections requiring hospitalization.

While this data is encouraging, the true impact on health systems across the country has yet to be determined, experts say. Main Line Health just announced a two-week pause in elective surgeries because of current COVID-19 surge.