One year after visiting Pope Francis, N.J. girl announces she is cancer-free 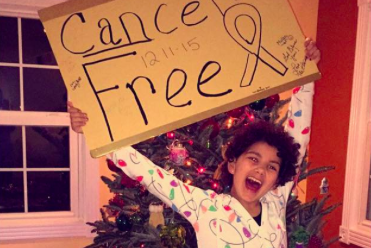 Gracie West, 12, celebrates news that her cancer is in remission one year after she traveled to the Vatican to meet Pope Francis.

Last December, 12-year-old Gracie West traveled to the Vatican with her brother for a trip sponsored by the Make-A-Wish-Foundation.

At the time, West, a native of Freehold, New Jersey, was suffering from Stage IV neuroblastoma, a rare form of pediatric cancer that hinders the growth of nerve cells, dividing them until they grow into tumors that spread and affect vital functions throughout the body.

Joined by her brother, West had the once-in-a-lifetime opportunity to meet Pope Francis, who embraced her, shook her hand and gave her a blessing, according to People.

One year later, in a post on Instagram, Gracie West enthusiastically announced that her cancer is in remission.

Looking back on her Vatican trip, West said she believes Pope Francis played an important part in her progress.

"Just his healing really helped and his hand of healing I think was just amazing, that he's the closest thing to God," West said in an interview with CBS New York following her trip.

Throughout her treatment, West and her family have maintained a high level of optimism, launching the Cookie's Crumblers charity to add some fun to an arduous and uncertain process. The foundation was created to help the West family with medical, travel and ancillary expenses.

"You have no choice but to be strong, but you can choose to be happy and positive," Gracie says on the Cookie's Crumblers website, a mantra she has chosen to embrace in all facets of life.

In June, the foundation held its inaugural Gala of Gratitude and has already made arrangement for a second event in 2016.

West says the big news is "a Christmas miracle," and while she still has plenty of treatment ahead to fully beat her cancer, she plans to make the most of her recovery. "This Christmas is going to be the best Christmas ever."

As for Pope Francis, Gracie's story marks the second time his healing ways have had a positive effect on local families. Last month, the Masciantonio family of Warrington announced that one-year-old Gianna, who had been suffering from a rare, inoperable brain tumor, miraculously displayed no signs of the disease in an MRI scan following the papal visit to Philadelphia in September. At the time, Pope Francis gave Gianna a kiss at Independence Hall.

Donations to support the West family can be made over at the Cookie's Crumblers site.