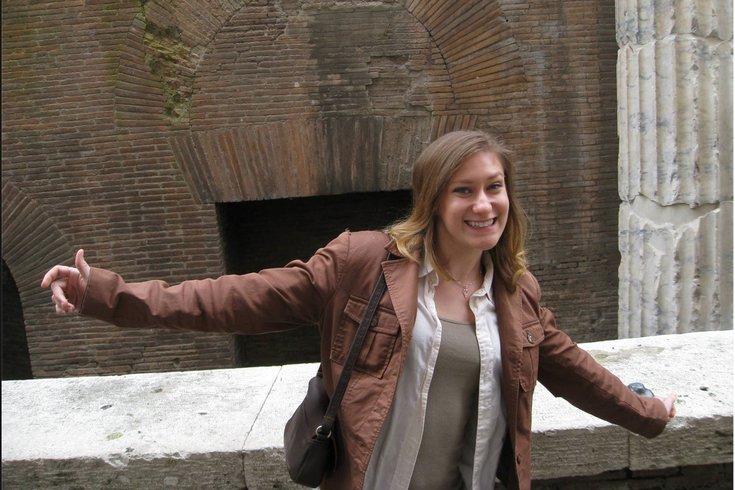 Amber Long, 26, and her mother were walking along North Front Street when they were approached by two men who robbed them of their purses and fatally shot Amber. Police are still searching for the suspects.

Monday marks a year since 26-year-old Amber Long, a Philadelphia architect, was fatally shot during a purse-snatching in Northern Liberties.

Long was walking along Front Street with her mother, Stephanie, when two men tried to rob them.

According to surveillance video of the incident, captured from a nearby residence and released by Philadelphia’s homicide unit in an attempt to identify the suspects, the two men approached the women, with one snatching Stephanie Long’s purse and the other, Amber Long's. During the ensuing struggle, Amber Long was shot and killed.

The video shows the gunman advancing on Amber Long and shooting her at point-blank range in the chest before the two flee the scene. She died in her mother’s embrace.

She fell at my feet, a laughing young woman turned in a single instant to a pitiful huddle on a cold sidewalk, life seeping away like spilled champagne, Stephanie Long writes on a website dedicated to her daughter’s memory.

Despite the surveillance video and a $37,000 reward for information, the suspects remain at large.

In memory of Amber Long and in honor of the one-year anniversary of her death, her alma mater, Philadelphia University, is putting together a $25,000 scholarship for future architecture students.

Long graduated from the university in 2011 from the architecture program and was working at NEST Architecture in Center City at the time of her death.

So far, the university has raised $19,000 toward its goal, which it hopes to reach by Monday.

Since Long's death, her mother also has formed the nonprofit organization, Handbags 4 Peace, which promotes street-smart awareness and self-defense training for women.