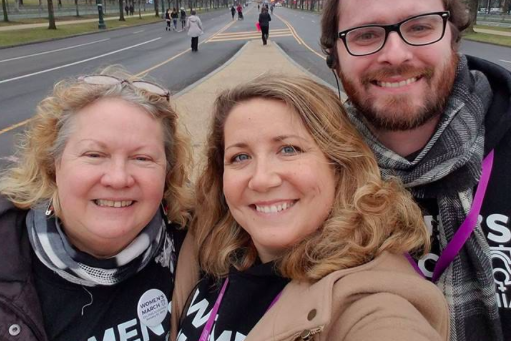 Emily Morse (center) organized the Women's March on Philadelphia attended by thousands on the Benjamin Franklin Parkway on January 21, 2017.

Facebook is a far more powerful tool than Emily Morse could ever have imagined.

Three days after Donald Trump capped his blustery quest for the White House last November, the supply chain specialist and Hillary Clinton canvasser felt emboldened to try something she had never attempted before.

Appalled by Trump's campaign rhetoric and insouciant dismissal of "locker room talk," Morse knew she wanted to join the thousands of women who immediately took to social media to plan a solidarity march on Washington, D.C.

"I thought, oh, I'm going to this, but then I saw a lot of friends between Philadelphia and D.C. saying they couldn't go for one reason or another," Morse said. "Friends that had neurodegenerative disorders, disabilities, kids they have to watch."

Morse, 33, wondered whether there might be a sister event taking place in Philadelphia. Unable to find one, she decided to create a Facebook page of her own. Within 24 to 36 hours, there were 10,000 people circling January 21 on their calendars and Morse realized she had a whole lot of work ahead of her to make her virtual invitation a reality.

"I don't have any prior experience in political activism," Morse said. "I have three children, so I've planned birthdays."

What transpired over the next two and a half months is an object lesson in civic engagement, one that played out in more than 600 cities worldwide on Saturday.

First things first, Morse reached out to the national organizers of the D.C. rally.

"I wanted to be in alignment with their mission and be an authentic sister march," Morse said. "We got that official title and I'm pretty sure we were the first sister march to pop up in the United States."

Next, Morse assembled a talented team to help with administering the Facebook page and getting the public relations effort in motion. She then got to work navigating the city's permit process to gain clearance for a large event on the Benjamin Franklin Parkway.

"Philly has just been nothing but supportive," Morse said. "I worked with Parks and Recreation, special events, police, Homeland Security, the mayor's office. D.C. is a beast with all the national attention, but Philly has been completely grassroots, from fundraising to word-spreading. We've all taken our different life and job experiences and applied them to planning this event."

I always listened to President Obama say change can only happen when ordinary people get involved. It took 8 years, but it sunk in. — Emily Morse, organizer for Women's March on Philadelphia

The group raised about $60,000 and established a line-item prioritized budget to cover the city's requirements, from insurance and sanitation to water, emergency medical services and electric hookups. A company out of Pittsburgh donated the stage. They got 300 seats and heated tents for the disabled, elderly and breastfeeding mothers.

And as more money came in, they decided they should go all out and get two jumbotrons.

"We didn't want to spend any more taxpayer dollars than we needed to, but we could also provide the services that we really wanted."

"I always listened to President Obama say change can only happen when ordinary people get involved," Morse said. "It took 8 years, but it sunk in. What we've seen and heard from Trump can't be normalized. It's 2017 and women are still fighting for rights and equal pay."

Morse likened the spirit of those marching to Alice Paul and the Silent Sentinels, who chained themselves to the White House exactly a century ago during the administration of Woodrow Wilson. They wanted the right to vote and about six months later they got the 19th Amendment.

"The difference today is that there are more men standing with us," Morse said. "My husband made our website."

Those in attendance at Saturday's march in Philadelphia did not come looking to form an unruly mob and regurgitate, en masse, the lengthy case against President Trump's divisive, scattershot campaign. They came to reiterate their commitment to participative democracy, conscientious citizenship and a social fabric built on the foundation of respect.

I wanted to inspire people by my normalcy. If I can do this, you can do this. If this is important to you, then you can get up and march. — Emily Morse, organizer for Women's March on Philadelphia

For President Trump, Morse has some pointed words.

"We are part of your constituency. Women and their allies all over the world are watching you. We have expectations of you and you're not living up to them," Morse said. "We don't just give up. This isn't just a one-day event."

To keep the momentum going, Morse and her team have established a nonprofit Philly Women's Rally to create forums to continue to fighting for women's rights.

"There are so many organizations doing that work," Morse said. "We'd like to consolidate that information and disseminate it, whether it's about reproductive rights and abortion or equal pay. There's a lot of misinformation. Our goal is to educate and bring people together."

The United States, and the world at large, is just one day into what looks to be a presidency that will transform how Americans practice democracy, wisened to all of its massive potential, inherent jockeying and dangerous pitfalls in the age of a living, breathing internet.

If President Trump fails to honor his oath to the American people — not just some, but all — Morse says Saturday's march will be a blueprint for the kind of collaborative action that needs to happen all the time and can take as little as a couple of keystrokes to get going.

"We have to hold him accountable and keep doing it," Morse said. "We've got to call him out on it. I wanted to inspire people by my normalcy. If I can do this, you can do this. If this is important to you, then you can get up and march."