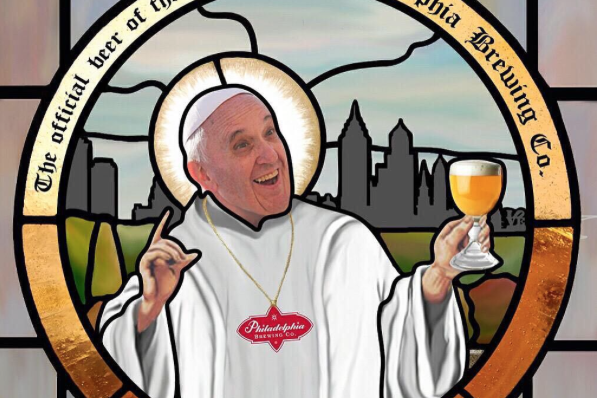 It seems to be becoming a trend. As more plans and security measures are unveiled to handle the large crowds coming for Pope Francis' visit in September, more and more area breweries are unveiling their papally-inspired beers.

This time, it's the Kensington-based Philadelphia Brewing Company jumping into the fray. Producers of several city staples including the Kenzinger pilsner and the Pennsylvania Pale Ale, they'll be releasing a Belgian-style Tripel called "Holy Wooder" this September.

The draft-only brew will be available at local bars, however, which ones you'll be able to grab a "Holy Wooder" at have not yet been released.

Philadelphia Brewing Company follows several other breweries in attempting to capitalize off of the holy occasion. New Jersey's Cape May Brewing is channeling Drake for its upcoming pale ale "You Only Pope Once" and Manayunk Brewing Company had their Belgian amber ale "Papal Pleasure" blessed by a priest.

In addition, a pope-themed pub crawl is planned for the very weekend that Francis is in Philly. Whether he participated in any of the libations created in his namesake remains to be seen