Drexel conference focuses on how to keep EMTs safe from violence 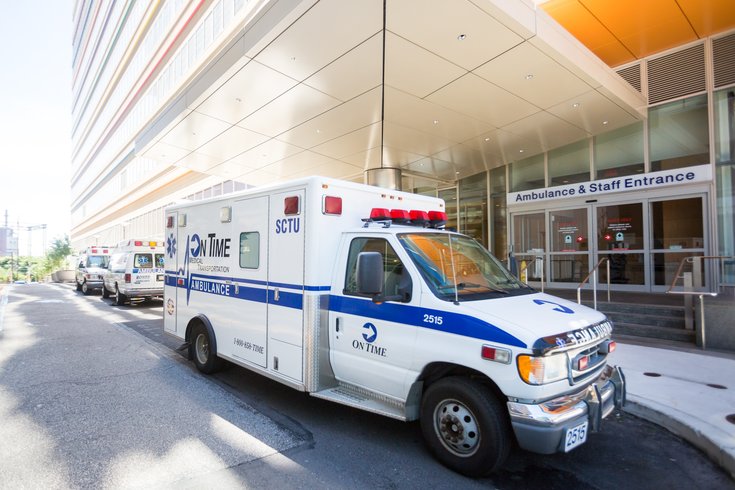 An ambulance parked outside the Children's Hospital of Philadelphia's Buerger Center for Advanced Pediatric Care.

Ben Vernon never saw the man pull the knife. But within moments he was being rushed to a San Diego hospital with a broken rib and punctured lung.

A firefighter paramedic with the San Diego Fire-Rescue Department, Vernon was responding to an intoxicated man at a trolley stop when a bystander picked a fight with the security guards assisting his unit. He jumped in to assist. He left with life-threatening injuries.

Vernon, 40, lived to talk about the attack, which underscores the threat of violence paramedics face – more often than the general public probably realizes.

Emergency medical technicians and paramedics are 14 times more likely to be violently injured on the job than the firefighters they work alongside, according to research conducted by Drexel University's Dornsife School of Public Health.

"It was a pretty gnarly event," Vernon said. "I can tell you that, physically, I healed rather quickly. In about four to five weeks, the stitches were out. My lungs were healed. ... But the mental injury kicked in and the post-traumatic stress."

"I've gotten to meet a whole bunch of us who have been viciously attacked.... Ironically, I've become a little bit of an expert on the subject matter." – Ben Vernon, San Diego paramedic

Three years later, Vernon is among a group of about 50 stakeholders gathering at Drexel University on Monday and Tuesday to develop a system-level checklist designed to better protect firefighters and paramedics. Fire Departments in Philadelphia, Chicago and San Diego will be the first to implement it later this year.

The conference will bring together officials from the National Highway Traffic Safety Administration, the Centers for Disease Control and Prevention, the International Association of Firefighters and various city fire departments, among others. Together, they will discuss a wide range of strategies to improve paramedic safety.

And Vernon will be front and center.

"I've gotten to meet a whole bunch of us who have been viciously attacked," Vernon said. "I've gotten to do a lot of talking to our people who have absolutely gotten their asses kicked. Ironically, I've become a little bit of an expert on the subject matter."

Ben Vernon, a firefighter paramedic in San Diego, suffered a punctured lung and a broken rib when he was viciously attacked while treating an intoxicated man.

Vernon still works for San Diego Fire-Rescue Department, responding to about 25 calls every shift. They're not all fires or roadside accidents, either. Often times, calls involve homeless people, psychiatric patients or people struggling with substance abuse.

In fact, Vernon said patients threaten violence so often that paramedics become complacent to it. Often times, nothing comes of the threat. But sometimes the patient follows through.

And that's when injuries can occur.

"You got so used to it not happening that you didn't put your guard up," Vernon said. "You weren't ready for that assault."

RELATED READ: The other victims: First responders to disasters often suffer in solitude

Research has found that most paramedics experience either a verbal or physical assault at some point in their careers, according to Drexel associate professor Jennifer Taylor. That evidence suggests somewhere between 57 to 96 percent of paramedics are assaulted in some fashion.

"I don't think the public really understands how stressful and emotionally draining these jobs are," Taylor said.

Taylor runs the Center for Firefighter Injury Research and Safety Trends (FIRST), which is hosting the conference.

"Paramedics and EMTs in Philadelphia operate in an unpredictable environment every time they respond to emergencies." – Crystal Yates, assistant deputy commissioner for EMS, Philadelphia Fire Department

There, the assembled group will finalize a system-level checklist aimed at identifying, assessing and preventing violence against paramedics. The hope is the approach will create less burnout, higher employee satisfaction and greater community engagement.

Among the talking points: Automatically dispatching police units to locations where previous violence has occurred against first responders, establishing de-escalation training, and offering paramedics stress pay – a benefit already given to Philly police.

That group will include Crystal Yates, the Philadelphia Fire Department's assistant deputy commissioner for EMS. She's no stranger to Taylor, or the FIRST team.

The city fire department has worked closely with Taylor's research team in the past, yielding its first policy for members who are assaulted on duty. That policy, released earlier this month, aims to standardize the reporting and tracking of assaults.

"Paramedics and EMTs in Philadelphia operate in an unpredictable environment every time they respond to emergencies," Yates said. "They face dangers that many would never imagine as they respond to shootings, stabbings, motor vehicle crashes and other medical incidents."

Vernon can imagine those dangers – all too well.

And there are several implementations he'd like to see.

First, he'd like to see dispatchers immediately send every nearby resource as soon as a paramedic calls for help.

"We call dispatch for help – that's when the breakdown starts," Vernon said. "Dispatch will come back on the radio and say, 'Hey, you're on the wrong channel. Where are you? What kind of help do you need?' They're trying to ask questions and you are in the middle of a fight – sometimes lethal."

Another suggestion: Add a second "emergency button" to the personal radio systems carried by paramedics. Currently, radios have one button that can be pressed to secretly – and quickly – call for help. But those buttons are pressed by accident so often that dispatchers have learned to verify the need before sending assistance.

"What if it was a two-button system where you had to hit two buttons simultaneously," Vernon said. "Your chances of accidentally activating it go way down."

And he's also big proponent of training paramedics in de-escalation tactics and situational awareness. He noted police officers are trained exactly how to knock on doors and clear rooms as they move through homes. Paramedics, however, do not receive such training.

Taylor expects Vernon's voice to carry some serious clout during the two-day conference. He'll be joined by another paramedic, Kelly Adams, who was stabbed in the face while treating a patient's injured ankle in Detroit.

"When you do stuff like this, you get a lot of egos in the room," Taylor said. "They're going to shut that down by telling their stories."

Following the conference, the checklist will be published in some industrial and academic journals, allowing an opportunity for public comment Taylor said.

Then, the Philadelphia Fire Department will be among those putting it into place.