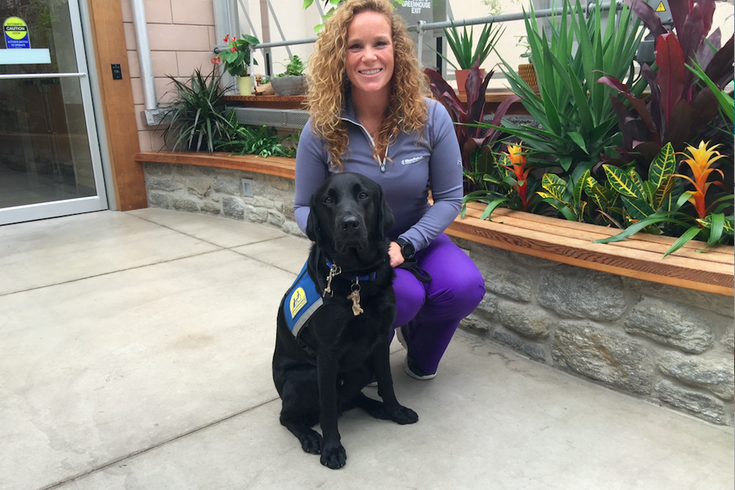 Liz Decina and Pender are teaming up to help patients recovering from injuries at MossRehab in Elkins Park, Montgomery County, with their 'social and emotional needs.'

Growing up in Bryn Mawr, Liz Decina and her two brothers always wanted a dog, but their dad wasn’t having it.

“We were a busy family, running around from sport to sport to sport, so he didn’t want us to get one since he knew he’d be the one who had to take care of it,” Decina said. “He also told us a story about the time he got chased onto a car by two stray dogs, so he was scared of that happening.”

While that was an understandable objection, the Decina kids started a dog-walking business in their hometown. That started when Liz was 8 or 9, and lasted through their elementary, middle and high-school years. They were entrepreneurial-minded enough to print up business cards.

Fast forward to last Friday, and Liz finally got a dog of her own.

His name is Pender. He’s part golden retriever and part lab. And, he’s trained in a fashion that will enable him to bring love, distraction, rehabilitative help and wellness to patients at MossRehab, with a focus on those at the Drucker Brain Injury Center, in Elkins Park and beyond.

For Liz – who studied recreational therapy at Penn State University and earned a master’s degree after studying applied behavior analysis from Temple University – the pairing marks both a personal and professional milestone.

After four years at a long-term residential care center for patients who suffered brain injuries, she arrived at MossRehab about three years ago. Around that time, the hospital’s facility dog, Seamus, was off to New Jersey along with his handler.

Around two years ago, Liz applied for the chance to work with a facility dog in that same capacity. After a lengthy process, she linked up with Canine Companions for Independence (CCI).

Pender, born in California two years ago and trained as a puppy by a CCI volunteer from New Jersey who wintered in Florida, has been getting the lay of the MossRehab land.

“These are highly trained service dogs. Pender follows 40 commands and can help patients with their social and emotional needs,” Liz explained. “He’s my perfect match: high energy but knows when to turn it on and off.”

As Pender chilled on the ground in MossRehab’s Sachs Therapeutic Conservatory, Liz spoke about how Pinder reacted once was paired with Liz for a life that will see him serve as in physical, occupational and speech therapy capacities for up to 10 years before “retirement.” 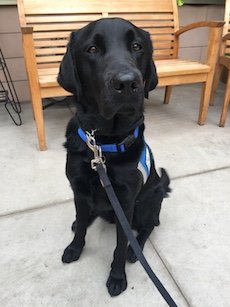 Pender will work as a service dog before he reaches 'retirement' age in seven to 10 years.

“(Monday) went better than expected,” she said of Pender’s first day at MossRehab. “There’s a high learning curve, and I think it will take up to a month for him to settle in.

"During his first meeting with a patient, he was apprehensive but within minutes after jumping up onto the mat (in the physical therapy gym), Pender was calm and comfortable.”

The patient, who had a traumatic brain injury, took to the distractive benefits of having a dog around.

“When you’re in pain, you don’t want to move around much because it hurts,” Liz said. “But within minutes, there were no more feelings of pain. It’s a very good distraction.”

It was a sign of what’s to come now that Pender is on staff at MossRehab, and one that pleases CCI’s Northeast Region Executive Director Debra Dougherty.

"The highly trained facility dog that Liz will be matched with will make an amazing difference in the lives of the patients she serves for many years to come," she said.