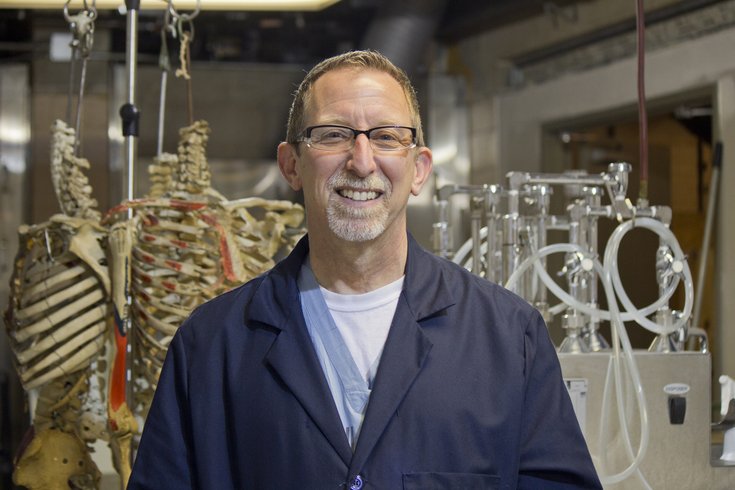 For students at Penn Medical, it’s not uncommon to come face-to-face with one of the university’s many generous gifts in the form of a donated body. These donations not only play a large role in the work of medical and dental students, but also in the work of the expert who cares for every single one, Perelman School of Medicine morgue manager Dwayne Hallman.

Though the idea of prepping hundreds of new cadavers is sickening to many, Hallman admits that morgue work was the natural trajectory of his career, starting when he was still a teenager.

“Very dear friends of my parents owned and lived in a funeral home in our neighborhood,” Hallman said in an interview with Penn Medical News. “I spent a lot of time playing at their house when I was younger, and as a teenager, my first job was working at that funeral home.”

After working in a funeral home for 10 years, Hallman joined Penn in 1987 and now works on new cadavers throughout every step of the embalming process, which can vary from body to body.

Hallman and the medical students working with the bodies find ways to honor and thank donors. Each year students of the medical and dental schools across Philadelphia actually offer eulogies, songs and poems at an annual Celebration of Remembrance. The name of every donor -- last year it was 278 -- is read aloud.

“The students truly respect and appreciate this important donation made not only for their own education but for the advancement of medical science in general,” Hallman told Penn. “I’ve often found notes or poems from students with the cadavers at the end of the semester, expressing their profound appreciation and respect.”

Each year as donations are accepted from September through December, Penn hopes for an average of 80 to 100 new cadavers to be used for teaching or medical research.

“Most people who donate their bodies do it because they want to help students or to help find a cure, sometimes for the disease that killed them,” Hallman told Penn. “Others have either worked in the medical profession or have family members who worked in this field and want to give back.”