Penn's first NFT, a video on COVID-19 vaccine technology, to be auctioned off

The sale will benefit future research efforts at the university, but the NFT market has cratered since its peak in 2021 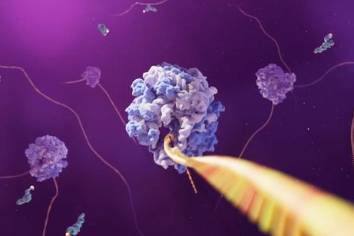 The University of Pennsylvania created an NFT that includes a 3D animation of the technology used in the COVID-19 vaccines made by Pfizer and Moderna. The NFT will be auctioned off to raise money for research.

A non-fungible token created by the University of Pennsylvania to commemorate breakthrough research used by COVID-19 vaccine developers will be auctioned off by Christie's next month.

The NFT – the first released by the Ivy League university – includes a one-minute, 3D animation depicting the way mRNA technology used in the Pfizer-BioNTech and Moderna vaccines protects people against the coronavirus.

A pair of Penn scientists – Dr. Drew Weissman and Kaitlin Kariko – identified a way to ensure mRNA reaches the part of the body necessary to trigger an immune response. Scientists believe the technology can be used as part of future therapies fighting influenza, cancer and other diseases.

"The stunning speed with which the mRNA COVID-19 vaccines were developed and their global success in fighting the pandemic has led to an explosion of interest in modified mRNA technology (that) can be applied across many fields," Penn Executive Vice President Dr. J. Larry Jameson said.

Christie's will host the online auction for the NFT from July 15-25. The money raised from the sale will be used to further research at Penn.

NFTs – digital assets traded via blockchain – were once a hot market. There were nearly 1 million accounts actively trading NFTs at the beginning of the year, but as of May, there were less than 500,000.

NFTs are data stored in a blockchain that provide public certificates of authenticity and proof of legal ownership. These unique digital assets can be in the form of photos, videos and audio.

The NFT market was estimated at $40 billion last year.

In early May, the Wall Street Journal reported that the NFT marketed had flatlined, noting daily sales had dropped 92% since their peak in September, and many NFTs had lost significant value since their owners had purchased them.

For example, an NFT curated by the rapper Snoop Dogg was purchased for $32,000 in cryptocurrency in April. That owner then put it up for auction with a starting price of $25.5 million. The NFT has been up for auction for months, and the asking price have been lowered to about $10 million. The latest high bid is the equivalent of about $480.