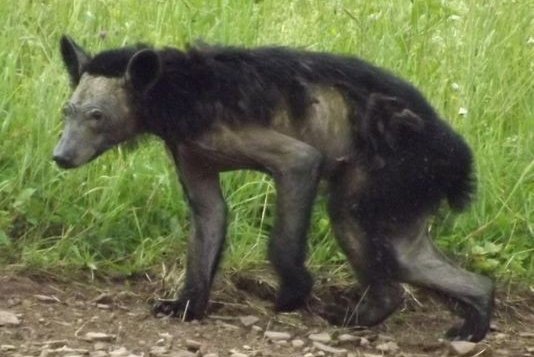 A bear with a severe case of mange

Researchers are launching a new two-year long study to try and understand why a highly contagious — and sometimes deadly — skin disease is spreading among Pennsylvania's black bear population.

Penn State announced Wednesday they're teaming up with the Pennsylvania Game Commission to look at the "epidemic" of mange among black bears.

"Mange is a recurring problem in Pennsylvania but it is occurring at an accelerating and seemingly unprecedented pace in bears," said Erika Machtinger, assistant professor of entomology at Penn State and lead researcher of the study.

Mange affects a variety of mammals across the globe. It's caused by parasitic mites and results in skin loss, but can sometimes lead to emaciation and death. There are medications that treat mange, but those treatments aren't commonly used among free-range wildlife, according to the game commission.

Penn State's team will track how many cases resolve on their own, how many are cured with treatment and how many healthy bears get mange. That information should help understand how mange affects denning and reproduction. They'll also collect blood and tissue samples and study to see if bears with mange are more prone to getting ticks.

Usually, a bear's immune system would be able to fight off parasites like mites after an initial reaction.

"But that doesn't seem to be happening with sarcoptic mange in some bears in Pennsylvania. And we need to find out why," Machtinger said.

The research is being funded by the Pennsylvania Game Commission and the Summerlee Foundation.