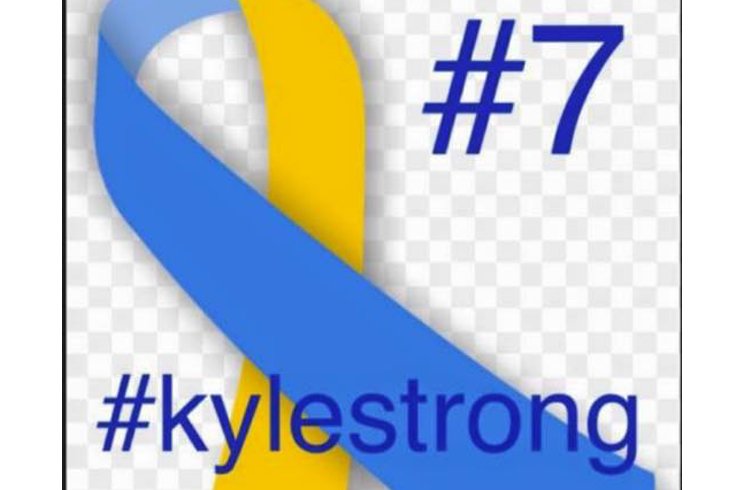 A banner showing support for a Pennsville student struck in a hit-and-run crash.

Students at Pennsville Memorial High School have been asked to wear the school's colors Monday for a teenager seriously injured in a hit-and-run crash.

Kyle Pszenny, a senior at Pennsville and member of the school's football team, was hit by a car early Sunday morning in a hit-and-run crash on North Hook Road in Salem County, New Jersey.

The 17-year-old was taken to Christiana Hospital in Delaware with serious head injuries following the incident. According to the school's athletics Facebook page, Pszenny underwent successful surgery for what NBC Philadelphia reports is brain swelling, but is in a critical stage of recovery that requires him to rest in order to avoid infection.

To show their support for Pszenny as he recovers, students were urged to wear blue and gold to school on Monday. Students have also been sending their well wishes by using the hashtag #KyleStrong on social media.

Sick to my stomach thinking about all of this. Stay strong @Kyle_Pszenny7 💙 #KyleStrong

Thoughts and prayers go out to the Pszenny family. You can pull through this KP, you're a tough kid. Stay strong buddy 💙 #KyleStrong

Been thinking about you @Kyle_Pszenny7 Hoping you're doing well. I'll keep praying for you. Stay strong! #KyleStrong

Really hope Kyle's okay😔 praying for him and his family🙏🏻❤️ #KyleStrong

Its going to be so weird not seeing you the first thing in the morning and 3rd block. But I'll be thinking about you all day! #KyleStrong 💙💛

as long as we pray. it will be alright💙💛 #KyleStrong

#KyleStrong love you and praying for you brotha 💙

Seniors; make sure to wear blue tomorrow to support Kyle. Please keep him and his family in your thoughts and prayers! 💙💛 #KyleStrong

According to NJ.com, township police are still trying to identify the driver and vehicle. Authorities are looking for a Hyundai Elantra with what they believe is most likely some extensive front-end damage.

Anyone with information regarding the incident is asked to contact the Pennsville Police Department at (856) 678-7777.