Coronavirus trends across United States show 'darkest' period could be ahead 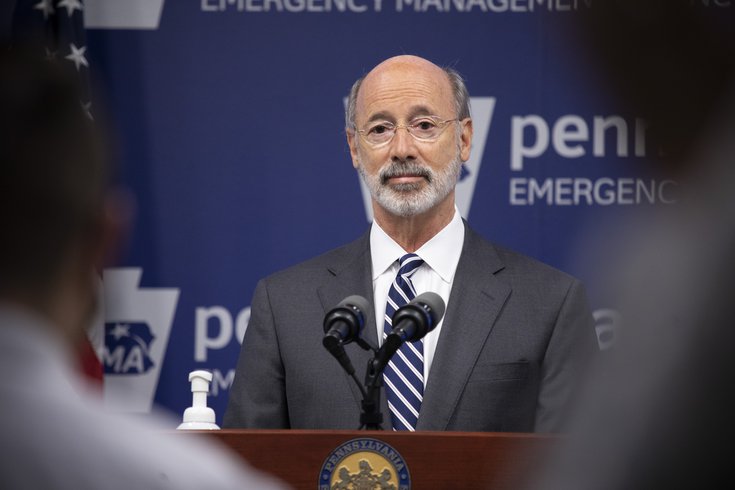 Pennsylvania Governor Tom Wolf discussed the state's response to rising cases of COVID-19 in October, pleading with residents to unite around mitigation efforts in the weeks and months ahead.

Pennsylvania officials urged renewed vigilance on Monday amid a surge in COVID-19 cases across the state.

Over the weekend, Pennsylvania reported a daily increase of 1,857 coronavirus cases, the second-highest single-day total since April 9. Another 2,372 cases on Saturday and Sunday marked 14 straight days of at least 1,000 cases.

The statewide case total has climbed to 183,315 since the start of the pandemic, with another thirty-four fatalities on Sunday and Monday raising the COVID-19 death toll to 8,500.

“The fall resurgence is here,” Wolf said at an afternoon press briefing. “And while we must always take this deadly virus seriously, now is the time for all of us to double down on our efforts to keep ourselves and those around us safe. We’ve seen what happens when masks aren’t worn and social distancing isn’t practiced – people get sick, so we need to stay vigilant and work together to stop the spread of COVID-19.”

The worrisome trend of rising cases, which many feared would accompany the colder months, has been tracked across most of the country in October.

Ten other states have reported their highest single-day totals in the last week, prompting one infectious disease expert to warn Americans that the next few months will likely be the most difficult stretch of the pandemic.

"We do have vaccines and therapeutics coming down the pike, but when you actually look at the time period for that, the next six to 12 weeks are going to be the darkest of the entire pandemic," said Michael Osterholm, director of the Center for Infectious Disease Reasearch and Policy, during an interview Sunday with NBC's "Meet The Press."

Osterholm emphasized the stark increase in daily new cases reported across the country.

"When I was on this show last, on Sept. 13, we had 33,000 cases reported that day," Osterholm said. "I warned that we were going to see a very dark fall. Friday, we had 70,000 cases, matching the largest number we had seen back during the really serious peak in July. That number, we're going to blow right through that."

Wolf and Pennsylvania Health Secretary Dr. Rachel Levine discussed the data behind the state's new wave infections on Monday, noting that increased testing is only a part of the story.

Philadelphia, which has seen that number creep above 4% this month, reported a three-day total of 614 new cases of COVID-19 on Monday. The city's case counts have risen sharply in October.

“Our data, including case counts, hospitalizations and percent positivity reflect the fall resurgence occurring,” Levine said. “The department and the Wolf Administration are working continuously to ensure we are prepared for this resurgence and to protect Pennsylvanians. We all must unite to protect ourselves and loved ones from COVID-19 by washing our hands, wearing a mask, social distancing, avoiding large gatherings and downloading the COVID Alert PA app.”

Despite the surge, Levine said Pennsylvania hospitals still are not under strain at this point. In addition to having more resources and knowledge of COVID-19, improved care also has reduced severe outcomes in many of the patients who are hospitalized.

"We face the fall resurgence with better tools than we had before, but it's still a challenge," Levine said.

Pennsylvania's largest case increases have been observed among young people (19-24 years old) in the north central and northeast regions, which respectively account for about 33% and 20% of new cases among that group in October. The southeast region has generated roughly 17% of new cases in that age group this month.

Most of the new COVID-19 transmission has come from large social gatherings, small gatherings with friends and families, and visits to certain higher-risk businesses, such as restaurants. College campuses continue to be a persistent source of spread.

Wolf insisted that wearing masks is the best tool Pennsylvanians have to collectively limit the spread of the virus. Although surveys have found more than 50% of residents in the state wear masks, Wolf said that's clearly not enough.

"We need to get to the point where people internalize mask wearing," Wolf said.

The governor, who has been sued over the state's mask mandate, acknowledged that the issue has become political. He said the science of disease prevention should take precedence and compared the responsibility to wearing a seat belt.

"It has been politicized, but I think the truth is that wearing a mask works," Wolf said. "Wearing a seat belt works, too. As more and more people figure that out, we'll do a better job. That's going to make a difference."

Wolf indicated Monday that he plans to appeal a recent ruling in favor of a Lebanon County restaurant that sued the governor over citations related to capacity limits and mask mandates, which the restaurant has defied since May.

There was no indication Monday that the state was preparing to impose new restrictions after gradually loosening them in recent months.

As cases surge in the midwest and western U.S., health experts say that some states have reopened without sufficient planning.

"It's not necessarily about reopening," Dr. Amesh Adalja, a senior scholar at the Johns Hopkins University Center for Health Security, told NPR. "It's about reopening with a plan and the public health infrastructure that's going to be able to absorb the inevitable number of cases that you get."

On Sunday, U.S. infectious diseases expert Dr. Anthony Fauci told "60 Minutes" that the country can and should be able to avoid another widespread lockdown. He suggested the conversation should not move in that direction or be framed that way.

"No, put shut down away and say, 'We're going to use public health measures to help us safely get to where we want to go'," Fauci said.

Wolf called on Pennsylvania residents to step up their adherence to COVID-19 guidlines to beat back the virus as they did earlier this year.

“The last seven and a half months have shown us that when we unite, we can defeat this virus. Pennsylvanians came together to stop COVID in its tracks and we can do it again and stop this fall resurgence in its tracks if we stand united against COVID," Wolf said. "You matter, and so do your actions. When we make good choices and follow health and safety measures, we see results. Let’s work together to stop the spread.”