Half of Pennsylvania adults are fully vaccinated against COVID-19 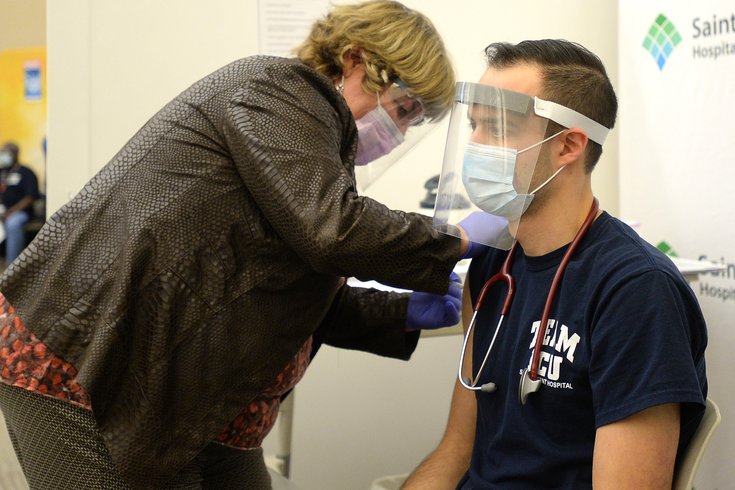 Pennsylvania is among 22 states in which at least 50% of the adult population is fully vaccinated against COVID-19. Above, Sallie Piazza, chief nursing officer at Saint Vincent Hospital in Erie, administers a COVID-19 vaccine to intensive care unit nurse Tyler Petti in December.

Pennsylvania has reached an important milestone in its pursuit of herd immunity against the coronavirus.

Slightly more than 50% of the adult population is now fully vaccinated — about 5.13 million people, according to data from the U.S. Centers for Disease Control and Prevention. And at 68.5% of adults have had at least one COVID-19 shot.

In Philadelphia, which receives its own allotment of vaccines, about half of the over-16 population has had at least one shot.

Gov. Tom Wolf has said he will lift the state's mask mandate for unvaccinated people after 70% of the adult population has been fully vaccinated — defined as two weeks after receiving the final shot. State health officials say this could happen within several weeks, the Associated Press reported.

Pennsylvania is among 22 states that have vaccinated at least 50% of the adult population. New Jersey and Delaware also have crossed that threshold. Maine and Connecticut lead the way, having each vaccinated 61%.

Wolf reinstated the state's disaster declaration Thursday — just two days after voters weakened his authority over emergencies. His ability to repeatedly renew the declaration — and the powers it provides him — have been a contentious issue throughout the pandemic.

During Tuesday's primary election, voters backed a pair of constitutional amendments that limit his control. One gives the General Assembly the power to extend or terminate a disaster declaration by passing a resolution with a simple majority. The other limits the length of a declaration to 21 days.

"We will continue to collaborate on the future of this disaster declaration and any future declarations that become necessary to help Pennsylvanians in the midst of an emergency," Wolf said in a statement.

This comes as vaccination rates across the country have slowed.

State health department data show more than 65,000 people are getting vaccinated in Pennsylvania each day, not including Philadelphia. That number was 100,000 people per day around a month ago.

Acting Health Secretary Alison Beam said community organizations and partners will be key players in reaching Pennsylvanians who are hesitant or resistant about getting inoculated.

"From here on in, each shot is going to be hard-earned and it's not a challenge that we're going to shy away from, but it is going to be one that we do with our community-based partners at all costs," she said in a COVID-19 update.

The same scenario is playing out across much of the U.S. Vaccination incentive programs have pushed for people to get their shot, like free donuts and beer.

New coronavirus cases have declined by 50% in just two weeks, according to the AP.

Wolf is set to lift the state's remaining COVID-19 restrictions on Memorial Day.

However, Philadelphia is taking a slower approach. Social distancing has been reduced to three feet in most public settings, including restaurants and bars. Gyms can increase capacity to 75% and masks are no longer required outside.

The last COVID-19 restrictions will be lifted June 11. The city also may lift its indoor mask requirement on that date, pending the state of COVID-19 transmission.