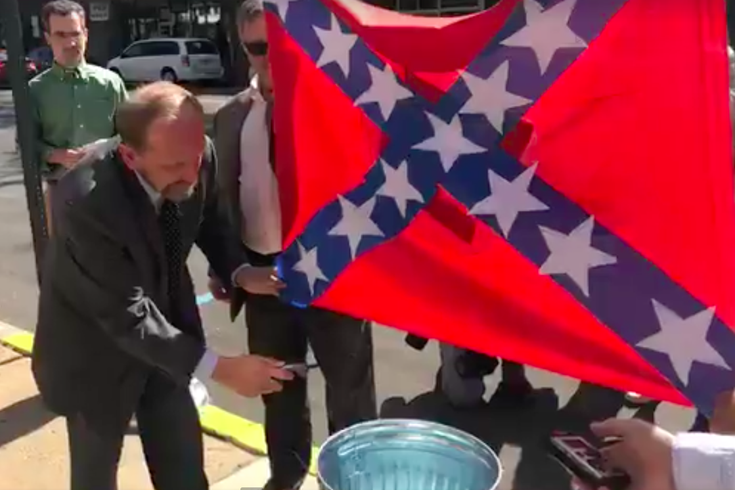 Last year, a vendor selling Nazi flags at the Bloomsburg Fair was expelled from the festival. This year, fair officials decided to allow the sale of Confederate merchandise, including the rebel flag.

Longtime Pennsylvania activist Gene Stilp argues allowing one and not the other is a distinction without a difference.

"The values of both flags are disgustingly equal," Stilp told PhillyVoice. "Both stood for racism, hatred, bigotry and even death."

So, after getting permission from the Columbia County Board of Commisioners, Stilp took his hybrid flag — a Nazi flag on one side, and a rebel flag stitched on the the other — to the county courthouse on Friday, the first day of the fair.

Burning it in a trash can to make sure the demonstration was safe for the public, Stilp hoped to drive home his point that the Confederate flag, like the swastika, stands for "intolerance and intimidation."

Stilp, a former Democratic congressional candidate who's been spending retirement confronting Republicans lawmakers, noted after his demonstration that Pennsylvania has one of the highest number of hate groups in the country.

He hoped Friday's protest would educate and help counter "public ignorance" about what the Confederate flag stands for, a mission he said was ever more important after the violent events at a rally of white supremacists and neo-Nazis in Charlottesville, Virginia.

Stilp said the idea of the flag "having to do with being a rebel" was one common misconception.

"They can say whatever it is, but basically the flag is a flag of the white supremacist," Stilp said.

"The Confederate flag is being used to intimidate minorities and I won't stand for that," he said. "We will not be intimidated by these bullying tactics."

The Bloomsburg Fair's 13-member board voted unanimously to allow for the sale of Confederate items, but decided against allowing Nazi items after last year's controversy, according to the Daily Item.

Paul Reichart, president of the Bloomsburg Fair Association, told The Times Leader that they asked the estimated six vendors expected to be selling the flags to only display one at their booth, and to put any flags sold in a bag.

He also said the fair was located on private property, so they could ask any protesters to leave.

Stilp said he didn't have anything else planned for the fair, but hinted at similar protests elsewhere.

"Stay tuned for other things across the state," he said.