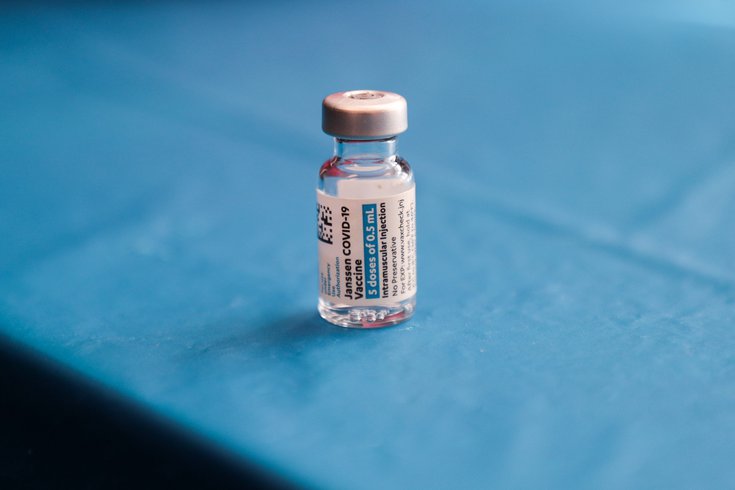 Above, a vile of Johnson & Johnson's single-dose COVID-19 vaccine.

A 26-year-old woman from Pennsylvania has been identified as one of the six recipients of Johnson & Johnson's coronavirus vaccine to subsequently develop rare blood clots.

The woman's development of blood clots after receiving the single-dose COVID-19 vaccine was one of three serious adverse cases that were reported directly to the pharmaceutical company, officials said Wednesday.

The woman checked into the emergency room with a severe headache about one week after being vaccinated. She was hospitalized in New Jersey despite being a Pennsylvania resident, according to the Bergen Record.

The woman, who was identified as a fitness instructor, was discharged from the emergency room and given medication to treat her headache. The pain continued, however, and the woman returned to the hospital a week later with abdominal discomfort and a rapid heart rate.

While COVID-19 was ruled out, lab tests found that the woman had a low platelet count in her blood. Scans also discovered that she had several blood clots in major blood vessels in her brain, abdomen and lungs.

The woman was originally treated with a blood thinner called heparin, which helped increase her platelet count. However, she was then switched to a blood plasma treatment after the type of blood clot was determined.

The woman spent seven to 10 days in the hospital before being released with a prescription for anticoagulants to treat the blood clots. She is the only patient among the six identified with cases of blood clots to have recovered and be discharged from the hospital.

Described as "overweight, but active," the woman had no history of blood clots and was not on any medication.

The Advisory Committee on Immunization Practices said Wednesday that it needs additional time to make a decision on how the U.S. should proceed with administering Johnson & Johnson's COVID-19 vaccine. The committee is expected to reconvene in the next seven to 10 days.

The CDC and the FDA issued a joint statement Tuesday urging states to halt the use of Johnson & Johnson's vaccine as federal health regulators reviewed six cases of a "rare and severe" form of blood clot in people who received the shot.

Federal health officials made their recommendation to pause the vaccine's use despite the fact that "these adverse events appear to be extremely rare."

The six blood clot cases occurred among women between the ages of 18 and 48. Symptoms transpired six to 13 days after they were vaccinated.

The type of blood clot they experienced is called a cerebral venous sinus thrombosis. It was seen in combination with low levels of blood platelets.

Therapy differs from typical treatment of blood clots. Heparin could be too dangerous and alternative treatments may be necessary.

Anyone who received Johnson & Johnson's COVID-19 vaccine and develops severe headache, abdominal pain, leg pain or shortness of breath within three weeks after vaccination should contact their health care provider.