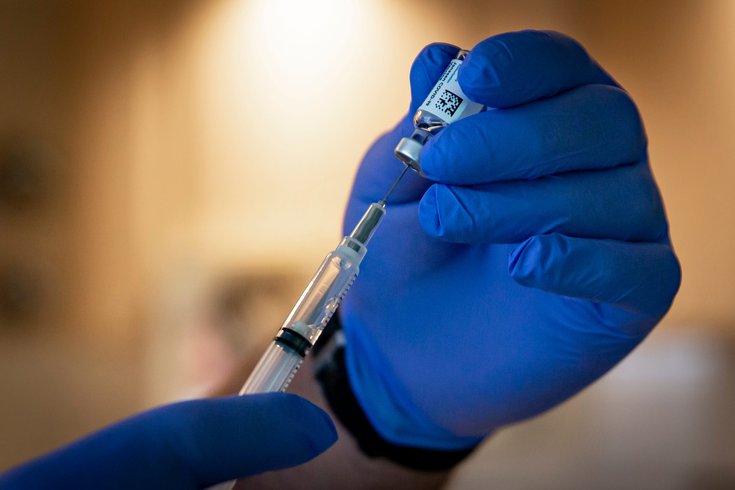 Philadelphia will follow recommendations issued by U.S. regulators and pause administration of Johnson & Johnson's coronavirus vaccine at all city clinics "in the interest of safety."

The U.S. Centers for Disease Control and Prevention and the U.S. Food and Drug Administration issued a joint statement Tuesday advising states to suspend the use of Johnson & Johnson's COVID-19 vaccine as the FDA reviews six cases of a "rare and severe" form of blood clot in people who received the shot.

Philly residents who had an appointment to receive the single-shot COVID-19 vaccine will be notified of all changes, the Philadelphia Department of Public Health said.

Effective immediately, and in the interest of safety, the Health Department is STOPPING the use of Johnson & Johnson at all clinics. We will post here on changes as they are confirmed. If you have a J&J appt today, you should receive notification of any change.

Pennsylvania and New Jersey also are suspending the use of Johnson & Johnson's vaccine.

Philadelphia officials said the city will initiate several adjustments to COVID-19 vaccine distribution in response to the pause on the Johnson & Johnson vaccine.

FEMA's Center City vaccination site, where officials had planned to hold final two weeks of Johnson & Johnson shots, will switch back to the Pfizer vaccine, beginning Tuesday. The city has requested that FEMA commit to six total weeks, including three for Pfizer first doses and another three for second doses.

The FEMA site at Esperanza in North Philadelphia had planned to use the Johnson & Johnson vaccine until Saturday. Instead, that site was closed Tuesday and will resume operations Wednesday using the Pfizer vaccine. The goal is to continue using the Pfizer vaccine there for a six-week period — three weeks for first doses and three weeks for second doses. About 1,000 shots will be administered each day, lower than initially planned with the Johnson & Johnson vaccine.

The Esperanza site is a key facet of Philadelphia's strategy to reach underserved populations. These groups already represented 85% of those who received several thousand Johnson & Johnson shots over the first few days of the clinic.

People interested in being vaccinated at the Esperanza site are advised to take advantage of public transit options that have been arranged to simplify the process.

Several neighborhood clinics that had been planned in Philadelphia will need to be rescheduled. This includes clinics operated by the fire department and the Office of Emergency Management at 7800 Ogontz Ave. in Northwest Philadelphia.

Another clinic scheduled for Friday at the Salvation Army building in West Philadelphia also has been canceled until other arrangements can be made. Several other pop-up clinics at local churches are likewise canceled until further notice.

For the rest of Pennsylvania, the state health department is monitoring the situation and will provide additional information as it becomes available, Gov. Tom Wolf said. He stressed that 6.8 million Americans have received the vaccine and that the blood clot cases represent less than 0.00009%.

"This move shows that the federal oversight process of vaccine safety and effectiveness is working," Wolf tweeted. "All steps are being taken to protect Americans."

Pennsylvania is following the @CDCgov and @US_FDA recommendation to pause the use of the Johnson & Johnson vaccine.

We're taking this step out of an abundance of caution until @CDCgov and @US_FDA can review the six cases of rare blood clots that have occurred.

In New Jersey, COVID-19 vaccination sites have been told to cancel or put on hold all appointments for the vaccine until further notice. The effort is being done "out of an abundance of caution," Health Commissioner Judy Persichilli said.

State health officials said they will work with vaccine sites to help reschedule appointments and make arrangements for affected people to receive either the Pfizer-BioNTech or Moderna vaccine. Each of those vaccines requires two doses.

Out of an abundance of caution and following the guidance of the CDC and FDA, the New Jersey Department of Health this morning paused the administration of the Johnson & Johnson (Janssen) vaccine across all vaccination sites in the state.

The CDC will hold a meeting of the Advisory Committee on Immunization Practices on Wednesday to review the blood clot cases and assess their significance. Federal health officials made their recommendation to pause the vaccine's use despite the fact that "these adverse events appear to be extremely rare."

The six blood clot cases occurred among women between the ages of 18 and 48, federal health officials said. Symptoms occurred 6-13 days after they were vaccinated.

The type of blood clot they experienced is called a cerebral venous sinus thrombosis. It was seen in combination with low levels of blood platelets, according to federal health officials.

Treatment differs from typical treatment of blood clots. The standard treatment, heparin, could be too dangerous and alternative treatments may be necessary, health officials said.

"This is important, in part, to ensure that the health care provider community is aware of the potential for these adverse events and can plan for proper recognition and management due to the unique treatment required with this type of blood clot," federal health officials said.

A similar issue was identified in AstraZeneca's COVID-19 vaccine in Europe. Johnson & Johnson said it is reviewing the blood clot cases with European health authorities and has decided to withhold the rollout of its vaccine in Europe until further notice.

"The safety and well-being of the people who use our products is our number one priority," the company said in a statement. "We have been working closely with medical experts and health authorities, and we strongly support the open communication of this information to healthcare professionals and the public."

A blow to vaccination efforts

However, this is not the first hiccup in the distribution of Johnson & Johnson's COVID-19 vaccine in the U.S. Earlier this month, about 15 million doses had to be thrown out after they were contaminated during production at the Baltimore-based plant Emergent BioSolutions, one of the company's contract manufacturers.

The White House said the pause in the use of Johnson & Johnson's COVID-19 vaccine will not have a significant impact on the United States' coronavirus vaccination plan.

More than 6.8 million doses of Johnson & Johnson's COVID-19 vaccine have been administered across the country as of Monday, but that accounts for less than 5% of total U.S. vaccinations to date, according to the White House.

White House officials said the country will have enough Pfizer and Moderna doses to vaccinate all adults against COVID-19.

In Philly, Farley said he believes the Johnson & Johnson issue will only be a small setback for the city and will not delay the goal of vaccinating everyone who seeks immunization by the end of June.

As of Tuesday, approximately 612,000 Philadelphia residents are partially vaccinated and 398,000 are fully vaccinated. The vast majority of those who have received vaccinations got doses of either the Pfizer or the Moderna vaccine.

About 20.8% of Philadelphia residents are fully vaccinated, whether they received a shot in the city or elsewhere, according to CDC data.

Farley said he does not believe the pause should scare residents away from getting vaccinated.

"I have full confidence that the Pfizer and Moderna vaccine that is still available is safe and effective and strongly encourage folks to get vaccinated with those vaccines as soon as possible," Farley said.

Johnson & Johnson's vaccine received an emergency use authorization from the FDA in February. The vaccine was 66% effective at preventing moderate to severe COVID-19 in clinical trials — an efficacy rating significantly lower than those produced by the Pfizer and Moderna vaccines.

Of the 20,000 participants who received the vaccine in the 40,000-person study, not one was hospitalized with COVID-19 in the months that followed. None of them died of the coronavirus.

An FDA analysis found the vaccine to be safe and effective. The most common adverse reactions were injection site pain, headache, fatigue and muscle pain.

The COVID-19 landscape in Philly

COVID-19 infections remained high but stable, with signs that fatalities may increase in the coming weeks.

Five new deaths identified Tuesday raised the city's total to 3,341 since the start of the pandemic. The city averaged about 20 to 30 deaths per week in late February and early March. As of the week of March 28, the city had reported 34 deaths.

"Unfortunately, I see this as a sign that we are likely to see an increase in deaths from here because the deaths do lag behind, so they are likely matching up with the increase in cases we've seen in the past few weeks," Farley said.

Farley again warned residents against acting as if the COVID-19 crisis is finished in Philadelphia.

"If you think this epidemic over, you are mistaken," Farley said. "This isn't over yet. The COVID-19 epidemic is still here and it is still deadly."