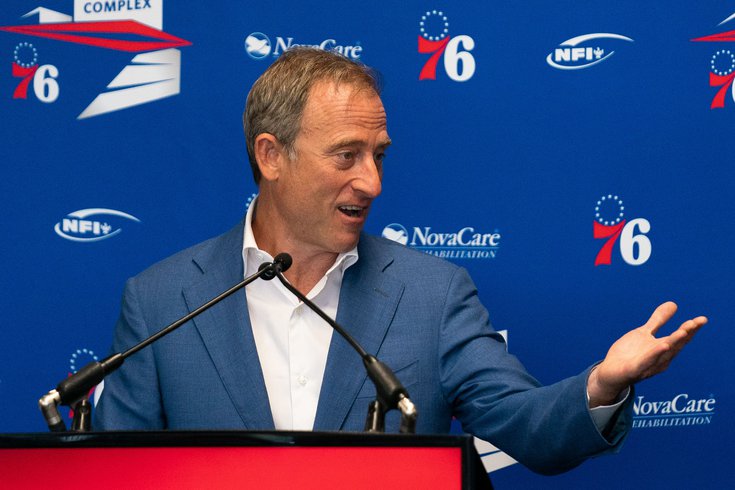 Harris and Blitzer’s bidding for the Phillies’ arch-nemesis was reported on Monday by Variety. Negotiations between both sides are still in the early stages, according to the report.

Along with owning the Sixers, Harris Blitzer Sports & Entertainment also owns the New Jersey Devils—one of the Flyers’ biggest rivalries—and the Prudential Center, which the Devils call their home arena, as well as Premier League club Crystal Palace F.C.

After purchasing the 76ers for roughly $287 million from Comcast Spectacor in 2011, Harris Blitzer bought the Devils and the Prudential Center for over $320 million in 2013. Comcast Spectacor, the owners of the Flyers, are responsible for operating the Wells Fargo Center.

The Sixers are valued at $2 billion, which ranks 11th among NBA teams, according to Forbes. The Devils rank 15th in the NHL with a valuation of $550 million, which is roughly $275 million less than the Flyers at No. 7 in the league.

Harris and Blitzer, however, aren’t the biggest name to express interest in purchasing the Mets. Former MLB superstar and current broadcaster Alex Rodriguez and his fiancee, actor/singer Jennifer Lopez, are interested in buying the team too.

The Mets, who have been owned by Fred and Jeff Wilpon since 2002, were on the verge of being sold this past December to hedge fund manager Steve Cohen for approximately $2.6 billion. Cohen would become the majority owner, but the Wilpon family would retain control of the franchise for five more years.

The deal fell through after Cohen—who would have owned up to 80% of the team—sought to push the Wilpon family out sooner than the five-year timetable that was laid out in the sale.

The Mets are valued at $2.4 billion, which is the sixth-highest in MLB, according to Forbes. The Phillies rank eighth with a $2 billion valuation.

Given that Harris and Blitzer already own a professional sports team which rivals Philadelphia, it’s only a matter of time at this point before both men seek to buy one of the Eagles’ NFC East rivals.