John McMullen: How the Eagles made the most of a potentially lost offseason 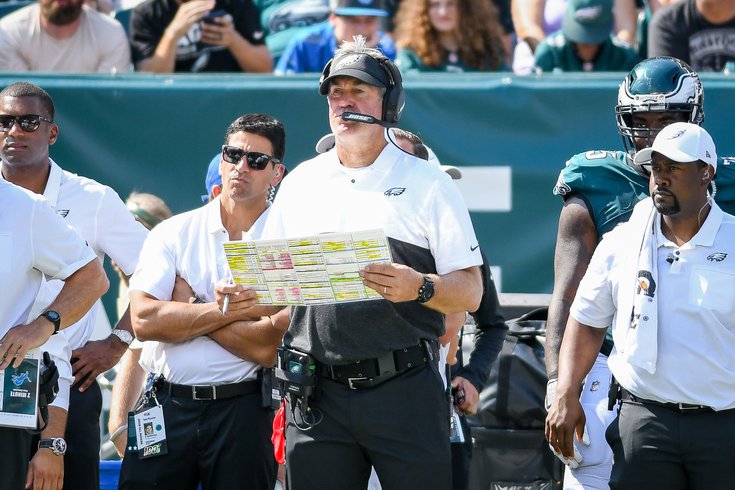 Head coach Doug Pederson during the Philadelphia Eagles game against the Detroit Lions.

The Eagles and the rest of the NFL will finish off what’s expected to be a lost offseason, at least from an on-field perspective, later this month.

While not official and some coaches began returning to their facilities on Friday of last week for the first time since the COVID-19 pandemic shut down much of the country, the thought of racing to get players back in buildings for a scant minicamp look — even if approved by everyone from state and local governments to the league itself — seems like a specious one.

Coach is back in Berea pic.twitter.com/DslbqcUuCK

Perhaps getting rookies acclimated to their new homes has value and would give any NFL team a slight head start when things ramp up for real this summer, but this league is always about good organizations vs. bad ones and if the latter tries to get a jump on the former in the form of three days of indoctrination to a questionable culture, any perceived advantage would quickly dissipate.

On the other hand, if you do rush players back for that cursory look and something does go wrong — like a positive COVID-19 test, an almost inevitability at some point — the fallout could set back the current plan for everyone. For that reason alone it’s extremely unlikely that the league itself even allows anyone to attempt to muck things up.

The Saints’ Sean Payton was the first and really only coach to say ‘see ya this summer’ even before virtual work began.

Conversely, the Eagles and Doug Pederson have incorporated everything that the league and the NFLPA allowed, both virtual workouts with the team’s training staff and virtual teaching sessions with the coaches.

“It's something that I definitely had time to think about the offseason when we had to leave our building around March 13th, March 14th at that time,” Pederson explained to me during a Zoom video call earlier this spring when I asked him about building his virtual template as a coach. “It gave me time to prepare and time to think about how I wanted to handle the offseason."

The conclusion was to integrate everyone due to a host of new staff additions, not only the incoming assistant coaches but the new director of sports performance Ted Rath, perhaps best known to fans as Sean McVay’s former “get-back coach.”


“I just felt like with so many new staff members, even Ted Rath being new to the team, new to the sports performance department, that I wanted our guys to be exposed as much as I could to him and our strength and conditioning staff," Pederson said. “I basically wanted to put our guys in an offseason program. I wanted them to work out. I wanted to do meetings.”

For the Eagles, their first-ever virtual offseason program began back on April 27 with the veterans. As with normal OTAs, everything was voluntary but Philadelphia had strong attendance, something that has been very consistent in the Pederson era as a whole.

If anything being able to check-in from home got more players involved.

Take Darren Sproles, the former Eagles running back who is currently dipping his toes in the personnel department with the organization now. Late in his career, Sproles would skip voluntary work to spend time with his family in San Diego but no one really cared because the Eagles knew he understood the offense better than anyone and his work ethic from a fitness standpoint is legendary.

Had virtual work been in play for Sproles, he certainly would have gotten involved.

“It's a voluntary offseason program, but we had just about – well, on the first phone call message, we had everybody involved, and we've continued to have everybody involved,” Pederson said. “That's exciting because guys are taking this thing seriously.”

The rookies ultimately joined by May 11 and unlike the lockout year of 2011, they’ve at least been able to communicate with coaches and gotten started on the mental side of things, something that can’t be overlooked according to All-Pro center Jason Kelce, who was a rookie during the lockout year.

“I got the playbook two days before we started training camp,” Kelce joked. “...The benefit for [the current rookies] is they’re at least getting the opportunity or will get the opportunity to meet with coaches, get playbooks, so they’ll be getting a lot more than I got during that offseason.”

The mechanics of the virtual offseason have been Pederson addressing the entire team twice a week and things branching off from there with Rath and the sports science department overseeing the workouts like Peloton instructors and the position coaches handling their own fiefdoms, only with players scattered across the country versus gathering in the auditorium for positional meeting rooms at the NovaCare Complex.

As usual, special teams coordinator Dave Fipp is the only coach not named Pederson with access to the entire team.

At the end of each week, assistants were required to give quick updates on each of their players to Pederson.

“One of the things that I've required my staff to do, at the end of every week, is e-mail me or text me a one-liner on how the players are doing,” the coach explained, “how are they understanding the information being taught.”

Every team was thrown into the deep end of the pool on this one and even Pederson isn’t sure if his plan is the correct one. The approach came from his gut.

“Is it right? I don't know. … But, at the same time, I do know that at least we are getting some football done and hopefully we'll be better off for it.”

The Eagles are taking the cautious path now that the all-clear sounded for the coaches and are continuing to allow them to work remotely with no players in the building anyway. The assumption being that flying everyone in for a few weeks before exiting and then returning for camp isn’t going to accomplish much.

Part of that decision, however, was also based on what the organization felt the remote work has already accomplished.

“The virtual collaboration over the past three months has proven that the contributions and value of our employees is not dependent upon their physical presence at the facility,” the organization said in a statement last week.

Sure sounds like the unintended consequence of the first virtual offseason for the NFL may result in it not being the last.

If Week 1 arrives and there is no discernible difference in preparation around the league when it comes to the finished product, an industry fighting upstream against health and safety concerns that reach far beyond the pandemic could have spawned its own new normal.

Make sure you follow the JAKIB Media Partners YouTube page at for your daily dose of “Extending the Play,” the daily Eagles podcast that became an institution in South Jersey as the No. 1 local drive time segment in the market.

Here’s what’s in the can so far:


• Football 24/7 also visited with Eytan Shander and SBNation, Jody McDonald and 94WIP, as well as the Tony Bruno Show with Harry Mayes  to discuss the latest NFL news and the current unrest around the country here:
(Insert Links:

MORE: McMullen: As our nation burns, it's impossible to 'stick to sports'