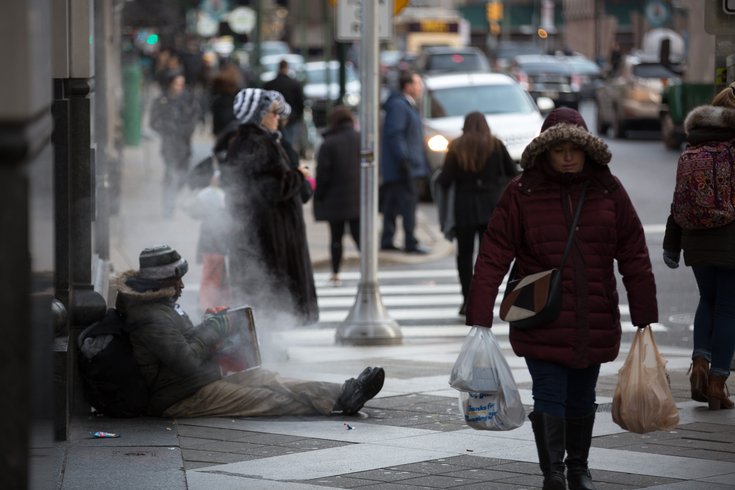 A man sitting on the street in cold weather weather.

The city of Philadelphia will undertake an official count of homelessness on Thursday as part of a federal initiative aimed at informing policy and allocating resources to provide shelter in communities across the country.

Starting at 3 a.m., a team of more than 250 trained volunteers will disperse to various zones throughout the city to document each homeless individual and determine their current housing needs. The count is part of the U.S. Department of Housing and Urban Development (HUD) Point in Time program, which has been compiling such data at the local level since 2011.

Broken into teams of three, the volunteers will cover every single zip code within city limits until the count concludes at 9 a.m.

Philadelphia's participation in the PIT program is facilitated through the city's Office of Homeless Services (OHS) and the Department of Behavioral Health and Intellectual disAbility Services.

In the year since Mayor Jim Kenney took office, Philadelphia has launched several initiatives to improve services to the homeless and minimize their hardships. Many of the programs have been made possible by $29 million in federal grants provided to the city last March

In May, the mayor revealed a proactive outreach program that sends city representatives to designated "hot spots" to meet with the homeless and figure out whether the city is able to provide them with services. In July, Kenney lifted a dormant ban on feeding homeless individuals in public parks, arguing that the solution to homelessness starts with removing the stigma surrounding it.

In November, the city announced that it will allocate $700,000 in grants to address youth homelessness, expanding the number of beds available at five Philadelphia service providers by 12 percent.