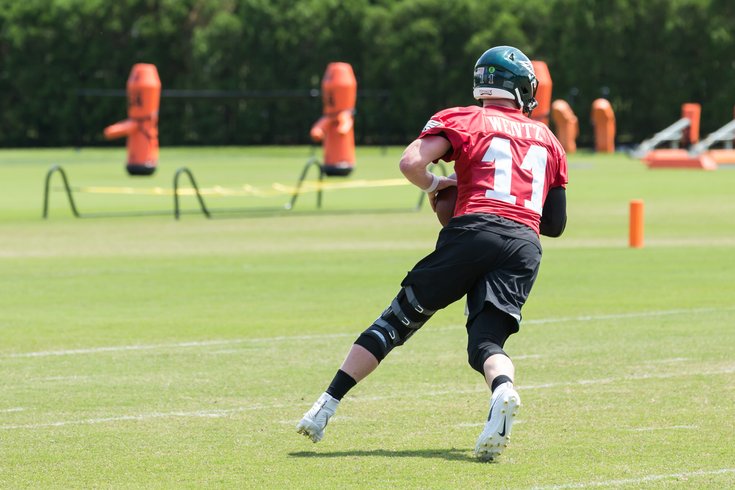 Eagles quarterback Carson Wentz during OTAs at the NovaCare Complex.

Everyone knows the Eagles aren't going to win the Super Bowl again this year, right?

Get used to that narrative all season long: Repeat champions are just far too rare in the NFL to put your hopes or your money on the Eagles in 2018-19.

In a twisted way, even if Eagles fans dial back their bravado, it may actually help the team succeed. Maybe if we're a bit skeptical, the Eagles will find a way to become underdogs in their own city. There are going to be believers and non-believers as the year plays out.

Rookies and veterans will report to training camp on Wednesday to begin their quest to defend last year's title.

What most fans don't get to see are the coaching conversations that take place during this time. Philadelphia will rightfully immortalize Doug Pederson for bringing the city its first-ever Super Bowl, but good lord — this was his rousing speech last summer to get the ball rolling toward a championship.

"Everybody get your mind right to make a nice run this year," Pederson told the team on the practice field. "A nice run! Remember: 7-9 sucks. Sucks! We're not gonna stay average, okay? We're not gonna — we put too much work in."

It's true, 7-9 sucks. You probably lost 5 games by four or fewer points, and you don't even get a good draft pick for it.

The Eagles posted a video on Tuesday to remind everyone about all of last year's doubters. Everything you see happens in reverse, but it's a great reminder that champions are made with focus and execution at every moment along the journey.

"We are not done yet. We have more to prove. This is our new norm."#FlyEaglesFly pic.twitter.com/imLN9cT3kp