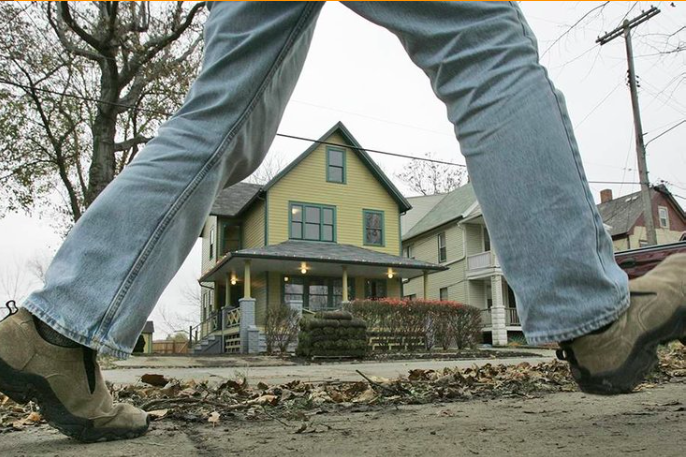 In this Nov. 13, 2006 file photo, a pedestrian passes by the home used in the classic film 'A Christmas Story' in Cleveland.

After years of cultivating an obsession with the 1983 holiday classic 'A Christmas Story,' a Philadelphia mother and her daughter submitted the highest bid for the gift of their lives: a two-night stay in the Cleveland home where the movie was filmed.

Nancy and Courtney Roberts wagered $8,523.21 in the fifth annual eBay charity auction to benefit A Christmas Story Foundation, whose mission is to restore homes in Cleveland's Tremont neighborhood, which serves as the fictional town of Hohman, Indiana, in the comedy starring Melinda Dillon, Darren McGavin and Peter Billingsley.

“I know every word, I'm obsessed with it. I love the marathon on Christmas Eve. It's just a great movie,” Courtney told FOX 8 in Cleveland. “I feel like a kid again.”

In 2003, California resident Brian Jones purchased the home for $150,000 in order to create a replica set of the movie and a nearby museum. Inside, the Roberts get to check out the bedroom of Ralphie Parker and pose with the Red Ryder BB gun he desperately wanted for Christmas. They can also see the risque leg lamp Ralphie's father wins as "major award" in a contest, only to be banished by his mother.

While the house and museum – filled with props, costumes and memorabilia – are closed to the public on Christmas day, staff there say December 26 is the busiest date of the year, drawing between 3,000 and 5,000 visitors. Annually, the house draws about 45,000 people, mostly during the holiday season.

Past winners in the contest bid between $3,000 and $6,000, but Nancy Roberts says this year's bid was made to honor her late mother. “It's important to me because I think this was probably the best way to celebrate my mother's memory."

When visitors start flocking to the home on December 26, the Parkers will treated to a courtesy stay at a luxury hotel in Cleveland. Whatever misgivings the family may have had about their big bid, it was clearly a triple-dog-dare that paid off in the form of lifelong memories.