In an empty Citizens Bank Park, one man is responsible for the cheers of 40,000 Phillies fans 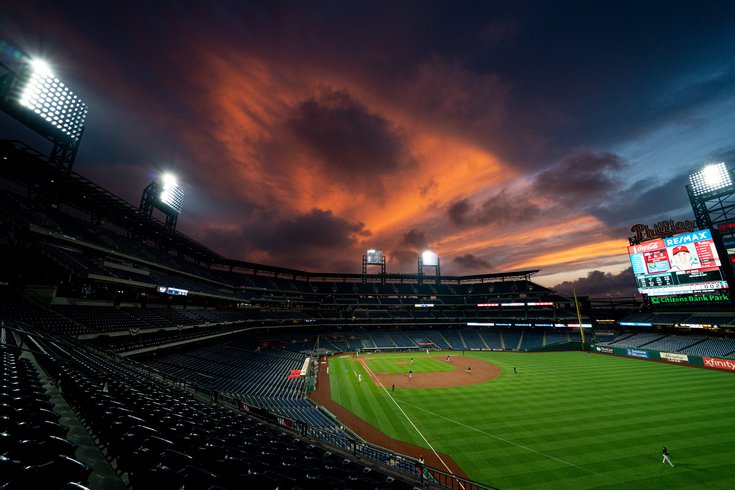 General view of the sunset over a fan-less Citizens Bank Park during the fifth inning of the Philadelphia Phillies' season opener against the Miami Marlins.

If anyone knows the sounds of Philadelphia, it has to be Mark DiNardo. The veteran audio/visual operator was born and raised in Wilmington, Delaware, and interned at PRISM.

DiNardo, 59, is the Phillies’ director of broadcasting and video services for the last 14 years in charge of the sounds of Citizens Bank Park. He sits in the PhanaVision control room on the club suite level and plays the role of conductor.

This season, in the wake of the COVID-19 pandemic that has kept fans away from sporting events, DiNardo has another job: playing the role of tens of thousands of screaming Phillies fans, as he is the man in control of the artificial crowd noise being pumped onto the field. And if Citizens Bank Park was sold-out Friday night for the Phillies’ 2020 home opener against the visiting Miami Marlins, DiNardo knows what sound would have come from the crowd after the Marlins’ four-run sixth inning.

A resounding crescendo of booooos!

“We have been directed by Major League Baseball to try our best, while creating a natural environment, to not bring that into the mix,” DiNardo said, laughing. “They specifically asked us that we not add boos to the mix, but it is kind of funny since everyone says that boos are ‘so Philly.’

“I wouldn’t expect to hear boos coming out of the gates. We’re trying across the league to maintain a competitive consistency that no one use these crowd sound effects for a competitive advantage. But it is a situation that we’ll continue to monitor if we see it pop up across the league. Then we’ll definitely have to address it.”

This is a challenging time for DiNardo and everyone producing sports during the pandemic.

DiNardo usually manages a nightly staff of 25 per game and an event staff pool of around 70 throughout a normal 81-game season. That’s been reduced to nine, with in-stadium player features scaled back considerably to head shots, statistics and player walk-up music.

“There’s not a thing that’s normal about this current season,” DiNardo admitted. “Everything about it, for the most part, has been a challenge by the sheer fact that it’s different. We come into the building and the colleagues and the resources that we used to have are not readily available to us.

“There’s only a fraction of our regular staff that’s currently getting things together for the game, and there’s a lot of people working remotely. It’s relearning the way we do our jobs, so every day is a challenge. But if that’s what it takes to deliver the games to the fans, it’s certainly something I would definitely sign up for.

“While it is a challenge, it is exciting.”

There will be a few fan-interactive features, where they’re dancing with the Phillie Phanatic or creating messages to the players at the end of a hype video.

But largest test will be recreating the sounds of the game for the players.

For the baseball purists, empty stadiums will provide the crack of the bat, the snap of the gloves as a player catches a ball or the spray of dirt when a player slides into a base. These are sounds normally drowned out by the din of the crowd.

Prior to working with the Phillies, DiNardo spent almost 15 years with the Flyers and 76ers. Under normal conditions, DiNardo and his staff would be catering to a filled stadium or arena.

“So, the crowd effects that all the Major League teams are going to be doing are really there as a backdrop for the players. There will be some kind of noise happening. Then we have the flexibility to add crowd reactions that are appropriate during the game to make it a little more realistic.

“It’s something that’s going to be very much a work-in-progress the first part of the season here at the ballpark and throughout the league. I’m pleasantly surprised after watching and listening to it over a couple of innings. It does provide a familiar background throughout the game that if you close your eyes you can hear people in the ballpark.”

DiNardo works primarily for the Phillies, but they’re handing the effects off to NBC Sports Philadelphia, which televises Phillies’ home games.

DiNardo and the Phillies will have access to crowd noise from Major League Baseball’s official video game, MLB The Show, through ballpark sound systems. Stadium sound engineers will have around 75 different effects and reactions to choose from, according to DiNardo.

The sound is provided by San Diego Studios, a branch of Sony Interactive Entertainment, which compiled the noise during games over several seasons.

“We have been working collaboratively with NBC Sports Philadelphia I would say since April on coming up with a solution and everything we do controls the sound, so we don’t lose the sound of the game,” DiNardo said. “The NBC Sports Philadelphia guys are artists. The sounds you hear when you play MLB the Show are truly native to the ballparks that you’re playing in the game.

“We’ve taken those sounds and we’re doing our best to equalize them in the ballpark to make them sound a little more life-like. We’re also in the process of going back through some games from NBC Sports last year to pull addition sounds that are native from our ballpark, whether it’s people clapping or cheering in the stands than hearing a generic crowd hum.”

By the second homestand, DiNardo is confident that they can layer those sounds over what they currently have in building a quality audio arsenal.

DiNardo and his crew went over a final dress rehearsal on Tuesday morning at home plate and the pitcher’s mound testing the audio. All the pyrotechnics were there, sans authentic crowd noise.

“The Phillies and I are blessed with great professionals in making sure the sound is good and it’s a collaborative team effort,” DiNardo said. “We’re close to where we want to be. But it’s not unlike going into any new season. We’ll do whatever maintenance we need to make sure that we’re better the next game.”

But not to be outdone by computers and a league that didn't want artificial booing, you could still hear a spattering of boos from Phillies fans watching through the Citizens Bank Park outfield gates during their 5-2 loss.