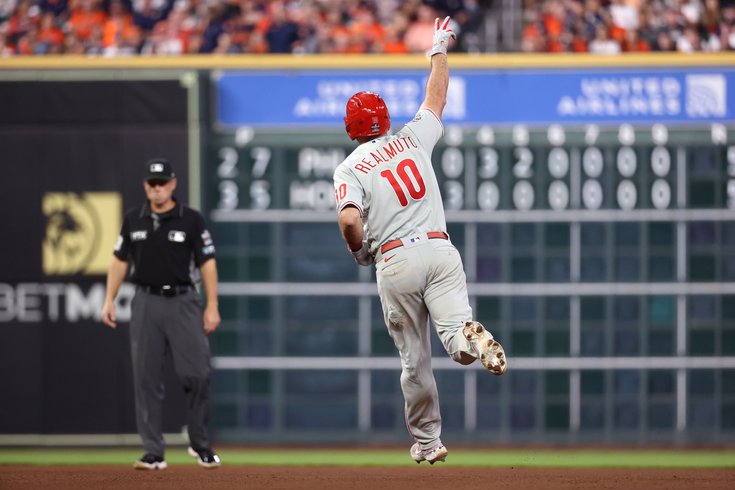 Phillies catcher J.T. Realmuto belts a game-winning home run in the 10th inning of Game 1 of the 2022 World Series against the Astros in Houston.

The Phillies might not have brought a World Series parade down Broad Street this fall, but the accolades continue to pour in for them.

Catcher J.T. Realmuto has been named to the All-MLB First Team for the 2022 season. Realmuto had an OPS of .820 while hitting 22 homers, stealing 21 bases and winning a Gold Glove Award for his stellar defense behind the plate.

This is the second time Realmuto found himself on the All-MLB First Team. He also did so in first year in Philadelphia in 2019. He made the Second Team in 2020, too.

Additionally, the Phils had two players named to the All-MLB Second Team. Kyle Schwarber, after leading the National League with 46 home runs, received one of the nods for an outfield spot. Aaron Nola, after sporting a 3.25 ERA and a major league-best 8.10 strikeout-to-walk ratio this past season, was one of the five starting pitchers on the Second Team.

Hey, maybe a year from now, I'm writing about Trea Turner making the All-MLB First Team on the heels of another Red October.