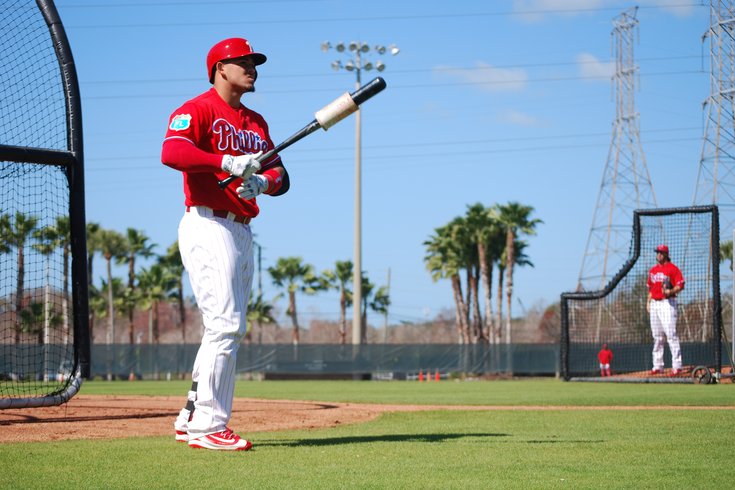 Jorge Alfaro, the prize of the Cole Hamels trade, is off to a promising start in his first season at Triple-A.

The minor league season isn’t even two weeks old yet, but it’s been nearly a month (3 1/2 weeks) since our inaugural Phillies Prospect Power Rankings.

Since this is a regular, fluid feature we didn’t want to wait a month. It just wouldn't feel right. As the season progresses, you can expect this list updated more regularly, as there will be more numbers and observations to shift the balance of power at the top and the bottom of the dozen prospects who make (or miss) the cut.

When this was rolled out last month, with a week left in camp, we nearly included the disclaimer that even though it is power rankings and not your traditional prospect rankings, we would still hold the top two or three spots (and the No.1 spot in particular) to a higher regard. It was going to take something momentous (including a major league promotion) for a change at the very top.

But that was our thinking then. Things change.

Something to keep in mind, however: again, these are ever-shifting power rankings and this is how we feel they stack up right now. This list could change in three days, or a week from today, or when the next PhillyVoice Phillies Prospect Power Rankings are published (sometime in early May, probably).

A lot of the list that follows, compared to our first unveiled on March 24, is based on 10 or 12 games (and for pitchers, much fewer than that). So take it for what it is: where the cream of the crop of the Phillies’ farm system rank according to who has gotten off to a hot start and who has not.

Pretty drastic, to begin this exercise by saying you'll hold the top spot in high regard only to change it up almost immediately? Possibly. And, again, we don’t want to put too much emphasis on 10 games. That’s silly and the very definition of a small sample size. Instead, consider this how strongly we feel about Alfaro and not about us being down on Crawford. Some baseball people would have had Alfaro ranked here, at the top spot, over the winter. If Alfaro can reach his ceiling, he’ll be an All-Star big league catcher with legit power and a Pudge Rodriguez-like arm. He’s off to a very good start in Allentown (By the way, he’s thrown out the only runner that’s attempted to steal on him so far this year).

Crawford is off to a dreadful start, but, again, he’s played 10 games. No one is down on him or worried or concerned. If his numbers still look this way in three weeks? Then you can panic. A little. Crawford’s final month of 2016 wasn't great (.205/.264/.265) by any stretch. But we’re not going to connect at-bats from August with the current ones from April. The kid turned 22 three months ago. Let's give him a little time to get going in ’17.

Mickey Moniak laces an 0-2 pitch off the right-field fence for an RBI double in the 10th and the BlueClaws take a 5-4 lead. He's 3-5 tonight

Moniak reached base safely in each of his first four games at FirstEnergy Park in Lakewood, N.J., this weekend. You can look at his numbers and recognize he’s having a very good start, especially when you consider he’s still a couple of weeks away from his 19th birthday. There are only 6 hitters younger than Moniak in the South Atlantic League. But just as we’re not freaking out about Crawford’s first 10 games, we should still remember that this is all of 11 games for Moniak. But, surely, a promising start.

At the end of Spring Training, Sanchez was honored with the Larry Rojas Award while 2016 third-rounder Cole Stobbe won the Bill Giles Award as the top minor league players in camp. Like Moniak, Sanchez had a nice debut at FirstEnergy Park when they opened their home season late last week: one earned run in five innings. Sanchez, who doesn’t turn 19 until the end of July, has a special arm.

Sixto Sanchez up to 97 and 98 MPH on the fastball, gets his 2nd K of the night in top of 2nd on a FB with some arm-side run.

Five months ago, when asked about some of the Phillies prospects after patrolling the organization’s minor league teams for most of the summer, Charlie Manuel said Rhys Hoskins could “get (Aroldis) Chapman’s fastball right now.” Manuel obviously knows a thing or two about hitters (he helped mold the likes of Jim Thome and Manny Ramirez) so if he likes your bat speed, you’re doing OK. Coming off an impressive 2016 at Double-A Reading, Hoskins hasn’t missed a beat in the first week and a half of games at Triple-A. He also impressed throughout spring training, too.

Kingery, the team’s second-round pick out of the University of Arizona two summers ago, already has more total bases in nine games this season (25) than he had in 20 games in the Arizona Fall League (24) last year. He’s homered in four of his last five games. He walked three times and stole two bases in his most recent game. Yes, he deserved to be bumped up five spots. But it’s a long season. Can he crack the top five? After watching him this spring in the Grapefruit League, I don’t see why not.

Reading 2B Scott Kingery leads all Phillies minor leaguers in HR (4) and RBI (12); tied for most R (11). pic.twitter.com/2gsqFd4MYl

In his second start of the season on Thursday in Palm Beach, Kilome struck out seven of the 25 batters he faced. He didn’t walk anyone. He allowed one run. His fastball hovered in the mid-90s. Maybe he could have jumped up to No.5 here, but he certainly isn’t dropping from where we had him three weeks ago.

Dropping Quinn down four spots for the result of 10 games doesn’t seem too fair, especially after he impressed in big league camp for the duration of the spring (.289/.373/.422 in 21 games). But after the first three elite names on this list (and maybe four, with the Rise of Sixto), there should be a lot of movement in the latter two-thirds throughout the summer. The most important thing for the oft-injured Quinn is to rack up games played. The next most important thing: reaching base, otherwise his game-changing speed is nullified. Still very likely the first outfielder called up if there’s a trade or injury with the Phillies

Brito didn’t crack the dozen-prospect deep inaugural list, but we did have him on the “just missed” list, so consider him bumping up from 13. The left-handed hitting Venezuela is the latest in a suddenly deep crop of second base prospects behind Cesar Hernandez. (Read: Hernandez could be an intriguing trade chip this summer if the Phils considered moving him). Notable on Brito: he’s already started two games at shortstop this year. Also notable: he’s made two errors while playing shortstop this year.

Daniel Brito homered on the game's first pitch yesterday. Today he singles on 1st pitch, and has now hit safely in all six games this year.

Like Quinn, he drops down four spots. But like Quinn, he had a very good showing in big league camp last month, so this isn’t time to freak out. It’s 10 games. He moved down to 10 because a few other worthy prospects moved up. Williams could be a torrid 2-3 week period from jumping into the top five in this space next month.  But the poor strikeout-walk ratio so far is in line with where he was during a down season in 2016.

Among the crop of promising young pitchers in Phillies camp, Pivetta often looked like the most poised and polished. Pivetta, who arrived in the Jonathan Papelbon trade, has continued to look that way at Triple-A. He’s faced 49 batters and just eight have reached base safely. Could he have moved up into the top 10? Sure. But No.11 has worked out OK for him so far. And perhaps by the next edition of these power rankings he won’t need to be listed at all since he’s likely the next man up when a starter is needed in Philly (following Zach Eflin’s promotion).

Almost anyone you spoke with at the Carpenter Complex in Clearwater last month would offer a similar observation: there’s a lot to like among the group of teenage pitchers in the lower levels of the minor league system. Dominguez, who can touch 98 MPH on the radar gun, is one of those arms. Eric Longenhagen, a lead prospect analyst at fangraphs.com, included Dominguez in a report from last week.

Next up: Pivetta (following Zach Eflin, who will jump into the Phillies rotation Tuesday).