Ranking the Phillies' alternate caps for special events throughout 2017 season

Earlier this week, Major League Baseball revealed the alternate uniforms for all six of their special occasions this season: Mother's Day, Memorial Day, Father's Day, 4th of July (Stars and Stripes), the Home Run Derby, and the MLB All-Star Game.

And for Phillies fans looking to pick up a new cap for the summer, there are some new options coming their way.

Over at sportslogos.net, Chris Creamer put together a great recap broken down by event and by team; I highly recommend checking it out.

Here's a look at what the Phillies will be rocking this season:

RELATED: Ask Hickey: Can I wear a green Phillies hat if I'm not Irish?

As expected, some are better than others, but there's more good than bad. And one thing is clear: nearly all of them are vast improvements over their 2016 counterparts.

So in an effort to help make sure you don't buy the wrong hat – and trust me, if you're an adult, any jersey you buy is the wrong jersey, so we'll stick with the caps – let's rank the six you see above, starting with the worst.

[NOTE: Because I'm no style expert, I've decided to give my better (and more fashion-forward) half, Sydney, a chance to weigh in on each. We certainly disagreed on a few.] 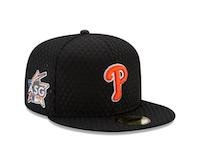 Where to begin? The logo on the side is ugly and way too big. The finish makes it look like a regular black cap that's wearing fishnet stockings. And an orange Phillies logo? Get out of here with that garbage. You know you're in trouble when the best part of the cap is hidden under the brim.

The good news here is that it won't be worn for an actual game – that, and the Phillies aren't likely to have anyone in the Home Run Derby anyway. 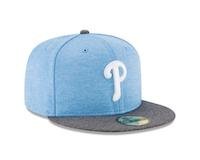 It's a true tribute to the hideousness of last year's Father's Day uniform that the 2017 version could arguably be the most-improved on this list and still finish in last place. I say last place because the one above shouldn't really even count.

As for this University of North Carolina Father's Day cap, it's just a little too much blue. But, hey, at least it more or less matches the rest of the uniform.

SYD'S TAKE: "I'm going to let Jack Donaghy explain this one for me..." 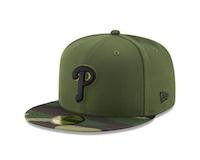 This is simply a matter of personal preference. I'm tall, pale and lanky with hair that would not fly in the Army. In other words, camouflage is not my natural palette.

That being said, it's a huge improvement over last year, and if you're a military veteran – or at least can pull off the camo look – then this cap seems like a no-brainer. And who knows, next year they could go back to that monstrosity you see Freddy Galvis wearing in the photo at the top of this post.

SYD'S TAKE: "No civilian has been able to pull off camo since the Destiny's Child "Survivor" video. Just remember that." 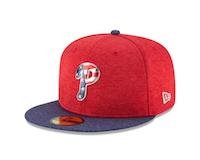 This cap is so close. I'd prefer if it didn't have the American flag logo over the "P" but it works in this case because it matches the Phillies team colors. Otherwise, the only thing keeping this one from being even higher on this list is what it's not: blue.

The heather blue they used on the brim, which is the main color on some other teams' caps, is absolutely gorgeous. They at least got it on the brim, but just take a look at the Braves' version and tell me you wouldn't want to see that with a Phillies logo instead.

SYD'S TAKE: "This would've been by No. 2 pick, because unlike Matt, I love America." 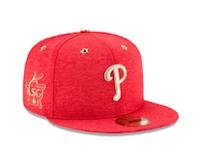 I'm not a big fan of gold as a secondary color, but it actually kind of works in this one. For the most part, that's because there's not too much of it. But it also tames down the ASG logo on the side of the cap, unlike in the one players will wear for the Home Run Derby.

The real saving grace of this cap is the color. It's a heather red, similar to the Independence Day hat. Sure, I just got over saying how pretty the heather blue was, but I don't see that anywhere on this cap, so I'm going to judge it on its own merits. And I like the one-color heather over the two-tone, and even though it's gold, I prefer the solid Phillies logo to the American Flag overlay.

SYD'S TAKE:  "You can only successfully pull this off if you have a grill. Gold has its place, but not on athletic wear." 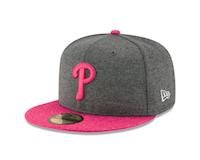 This is kind of like what I wanted the Father's Day cap to be, just pink. If the whole cap was pink, it would be way too much. But this is just enough. In fact, I'd like to see this model in a few different color ways – it might even get me to come around on the orange Phillies logo I was previously so quick to dismiss earlier in this post.

The dark gray with the bright pink, it just works.

SYD'S TAKE: "This is definitely one of my top picks. As a longtime lover of pink, I tend to appreciate a man who can pull off wearing that color. Plus, it's not too much pink, especially with the heather gray to tone it down."