What they're saying: Joe Girardi in trouble? How much work will Phillies' new prospects need? 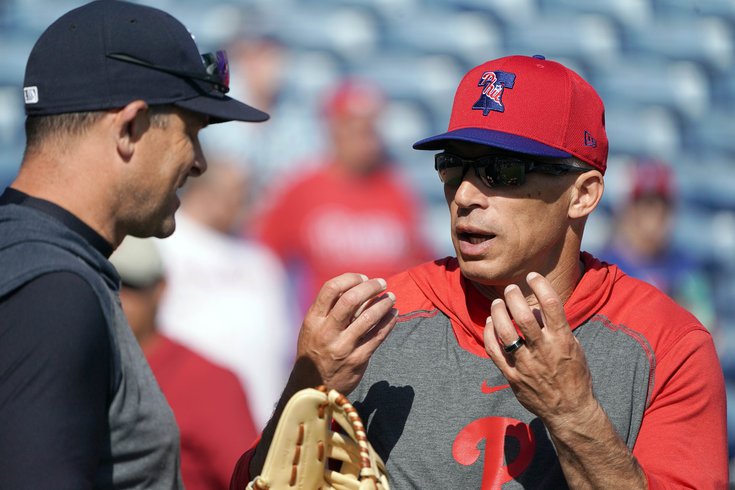 In what continues to be the weirdest (and most depressing) summer in baseball history, the two sides (the players and owners) continue to show no common ground as the 2020 regular season remains nothing but a fantasy.

The business of baseball kind of continued last week, as the 30 teams collected — via the internet — to draft five rounds worth of players in what is usually a 40-round event to try and bolster their futures. The Phillies added four players, each of which we will get into in just a bit.

They also signed three undrafted free agents, a football term that is oddly relevant as teams are allowed to give anyone they want a $20k signing bonus and, I guess a promise that someday soon they'll get to suit up for whatever remains of minor league baseball whenever they are allowed to play games again.

There is no shortage of Phillies-related news out there, ranging from Joe Girardi's potential participation in the Yankees "cheating" scandal, to prospect rankings, to Bryce Harper abandoning the Cowboys. Here's a roundup of what they're saying:

Apparently, there is a judge in New York who may unseal a letter that reveals some specifics about the Yankees' sign-stealing scheme back when Joe Girardi was the manager there. The recent crackdown on electronic devices used to steal signs has nabbed victims in Houston, Boston and in New York, where former Yanks' outfielder Carlos Beltran was a "ringleader" for activities that got him ousted from managing the Mets. Here's a bit more from NJ.com's Joe Giglio:

Keep an eye out for the letter, names redacted and if the Phillies (or Yankees) quickly try to brush away blame from Girardi for a team transgression years in the past. Odds say Girardi won’t see his current gig come into question, but the mob mentality of eye-for-an-eye discipline in baseball is something that looms out there.

At bare minimum, Girardi’s reputation will take a hit and a statement (or press conference if this season ever starts) will be on the horizon to explain what really happened during the years in question in New York.  [NJ.com]

As we briefly mentioned at the top, the world of pro baseball is becoming unrecognizable, especially for the youngest of aspiring ballplayers. Here's a pretty solemn look at exactly what top pick Mick Abel and the other newest Phillies will, or won't, be getting themselves into.

A year ago that would have meant a trip to Citizens Bank Park to meet some of the big-leaguers you one day hope to join as a member of the Phillies. That would have been followed by some summer training in the heat and humidity of Clearwater, Fla., before pitching in a handful of Gulf Coast League games against rosters filled with fellow high school picks and teenagers who signed out of the Dominican Republic, Venezuela, and other Latin countries.

If you did really well, you might have even made your way to Williamsport, Pa.,where you would have faced some of the kids who were drafted out of college this season. Let me tell you, historic Bowman Field is an antique treasure and the people in Williamsport really love their baseball.

Had it not been for COVID-19, you might have been one of the last Crosscutters affiliated with the Phillies. It sure appears as if the charming New York-Penn League could be wiped out by baseball’s desire to save money. Chopping 40 minor-league teams is reportedly on commissioner Rob Manfred’s to-do list once the owners and players union figure out a way to get big-league baseball back on the field this summer.  [Inquirer.com]

While you're feeling down about baseball, we might as well hit you with another gut punch. According to The Athletic's baseball expert Keith Law, after their first rounder Abel (a rare high school pitching choice for the organization) the Phillies picked some very flawed baseball players last week.

Casey Martin (3) was a possible first-rounder coming into the year but was so bad in the early going that it knocked him well into Day 2. He’s a 70 runner who could stay at shortstop, with plenty of arm for that position or third base, but he’s a dead-pull hitter who doesn’t pick up spin and gets around the ball way too often. There’s a good regular in here, but the Phillies have a lot of work to do to get him close to an average hit tool. Right-hander Carson Ragsdale (4) is another power arm, a reliever for two years at South Florida who came back from Tommy John surgery to strike out 37 batters in four starts (46 percent of batters faced). He was up to 95 mph in his return with an above-average curveball but needs a third pitch to start. Baron Radcliff (5) is, in fact, not a rejected “Clue” character but an all-or-nothing power hitter who’s struggled to hit for average at Georgia Tech and might end up at first base or DH.  [The Athletic]

Keeping on the topic of what the Phillies have in their draft class, ESPN's baseball guru went through all 30 teams to try and determine which of their draft picks would be the first to crack the big leagues. And somewhat surprisingly (though less so after reading Law's take), he believed the first player who will be MLB ready is their lone high school selection, Mick Abel:

I'm going with Abel over the Phillies' three other selections, all college players (they didn't have a second-round pick). While his high school team didn't play a game, Abel is still viewed as a polished high school pitcher with three quality pitches already.  [ESPN]

Away from the dark side

We wanted to end on a lighter note, one provided by Bryce Harper via Eagles writer Dave Zangaro. It wasn't much of a secret that Harper grew up a fan of the Dallas Cowboys. It seems as though his brief time so far in Philly has changed that. Here's an excerpt from a recent appearance Harper had on Lane Johnson's podcast "Outside the Lane."

Harper: I got into Philly and you can’t do it, man. Seeing the way you guys play and the way you guys go about it every single week, just like the Sixers or anybody else. I couldn’t imagine walking in somewhere and disrespecting you guys. No, I’m serious. The way you guys prepare, the way you guys do it, I think that was kind of one thing that when I was in DC I was like, ‘I always rooted for the Cowboys when I was growing up and things like that.’ It was like my dad did it and I did it. But then a couple years back, I was like, I don’t really watch it as much, I don’t know the guys.

Now, getting to know you or Carson (Wentz) or anybody that comes over the the Bank and things like that. I was talking to (his wife) Kayla during football season. Of course I play fantasy like any other baseball player. I see you guys prepare, I see the way you guys go through it, especially last year. I think losing all the guys you guys lost last year for injury and things like that, for you guys to be where you were showed how much of a family you guys were. You could see that. It was that next man up mentality. And the way Doug Pederson deals with everything. I don’t play for Doug so I wouldn’t know.  [h/t NBCSP]

There are two ways to look at this. He is absolutely right to change teams. Being a Cowboys fan growing up in Nevada because your dad was one? Bleh. But... do you respect someone who doesn't stick with the team they grew up rooting for? I say this is a good thing, but it's not as cut and dry as it seems on the surface.