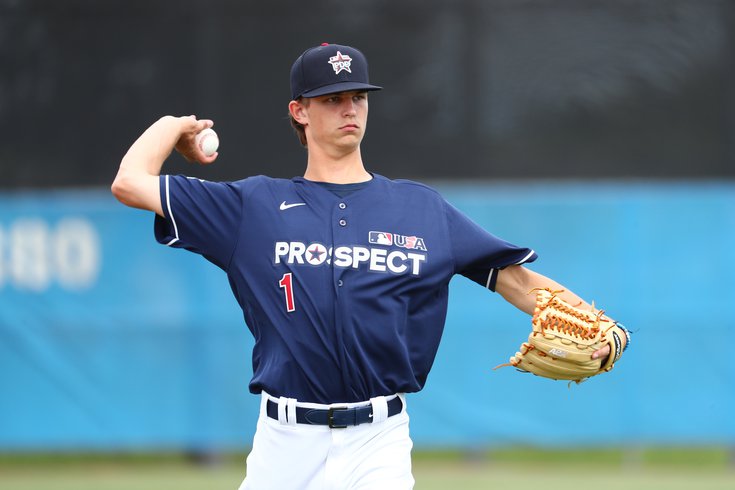 New Phillies pitcher Mick Abel has been drawing some high praise after being selected 15th overall in the 2020 MLB Draft.

On Wednesday night, the first round of the MLB Draft took place, with the Phillies grabbing a highly-touted high school pitcher out of Oregon in Mick Abel.

The hard-throwing, 6-foot-5 righty has drawn rave reviews from analysts and has been compared to some of the best pitchers in the game, from Justin Verlander to Stephen Strasburg. That's pretty good company for a guy who is just 18 years old and had his senior season cancelled due to the pandemic.

The Phillies had apparently seen enough through his junior year and in their own personal (and virtual) scouting of Abel to take a flier on a high school kid with tons of potential. And analysts from all over agree that the Phillies, who took a high school pitcher in the first round for the first time in a decade, got a good one with the 15th overall pick.

Here's a look at what the local and national media are saying about Abel, as well as some grades on the pick...

First off, let's see what the Phillies are getting in Abel's arm. The newest member of the organization sports four quality pitches and has hit 100 mph on the gun. Here's a look at his repertoire, with some analysis from Phillies amateur scouting director Brian Barber...

Abel has a fastball that has touched 100 mph, but sits in the 94-97 mph range. He has an excellent slider that he feels comfortable throwing in any count and in any part of the strike zone. He also has the ability to change the shape of the pitch from a hard, tight breaking ball to more of a slurve.

He throws a changeup and curveball, too.

“Most 18-year-olds with that type of fastball and that type of slider probably just don't use their changeup as much as they're going to,” Barber said. “The curveball is a pitch that he's used in the past and put it in his back pocket. Through the pandemic and shutdown, he sort of brought it back out [in workouts]. The film and the data that we've seen looks really good on that for future improvement as well. I'm definitely hoping we'll get a guy who has four pitches that are quality and all get big league hitters out.”  [mlb.com]

Over at NBC Sports Philly, Salisbury and Seidman provided an in-depth look at Abel, who has drawn some big-name comparisons and has generally been regarded as the best high school pitcher in the draft. They quite a few clips of Abel on the mound, but it's those comparisons that are really eye-popping.

"I comped him to Justin Verlander, so that tells you how much I liked him," former Rockies GM Dan O'Dowd said on MLB Network.

"It's a plus fastball, he commands it, a wipeout slider and, for me, I don't see max effort at all in the delivery. He does it easy. Developing changeup and he's got two plus pitches right now with plus command of them. This guy, for me, is the best-looking high school pitcher in this draft."

"To be honest, I don't do comparisons a whole lot. But I wouldn't mind it if those two that were mentioned worked out," Barber said when asked about those two superstar comps. "He has four pitches that are quality and can get big-league hitters out."  [nbcsports.com]

Abel can be compared to Cy Young himself, but it doesn't mean anything until he proves he can do it at the big-league level. And because he's a high schooler, the Phillies will have to wait a considerable amount of time before they know whether or not they made the right move.

But the team's scouting director Barber isn't so much worried about the potential of a player of Abel's caliber. He's more concerned with keeping him healthy as he climbs the minor league ranks.

That being said, the pandemic-cancelled seasons may have made teams less willing to take a chance on a high school pitcher, allowing a better player to fall into the Phillies lap at 15.

It wasn’t the local kid Nick Bitsko from Central Bucks East High School. It was Mick Abel, a 6-foot-5 righthander from Jesuit High School in Portland, Ore. High school pitchers are always a high risk and that’s especially true this year because they were all sidelined by the COVID-19 pandemic.

The good news for Barber is that it’s going to take a while to figure out if his first pick is a hit or a miss. That, of course, is the case even in the most ideal of situations.

Right now, all we can do is speculate about Abel, who unquestionably has the arm to make it to the big leagues.

“There’s definitely more risk associated with a high school pitcher,” Barber admitted during a conference call with reporters. “You’re talking about some formative years where they become an adult man and they have to pitch the innings. That’s probably the biggest risk factor — maintaining the health with those players.”

A rival scout who saw Abel pitch a lot described the 18-year-old as throwing “easy and loose” and said he has a “high ceiling.”  [inquirer.com]

Keith Law has a draft philosophy similar to the one that many NFL teams have regarding taking running backs in the first round. Most teams don't like to do that, and similarly, Law doesn't believe in drafting high school pitchers in the first round as a general rule.

But if there was a time to break that rule, it would be for a pitcher like Abel.

The Phillies broke the seal and took the first high school pitcher in Mick Abel, the best prep arm in the class by a mile. I don’t really believe in taking high school arms in the first round, especially not in the top half, but that’s a general philosophy and Abel is the most obvious example this year of someone I would consider there, having ranked him 16th in the class. He checks every box you could want in a teenaged pitching prospect and has been this good since the summer before his junior year.  [theathletic.com]

Another outlet, another round of praise for Abel, who again is drawing comparisons to Verlander and Strasburg. Of course, that's far from a guarantee.

Who is Abel? The first high school player from Oregon drafted in the first round since the Royals took Matt Smith in 1994, the 6-foot-5 Abel has been a first-round candidate since hitting the mid-90s on the radar gun early in his prep career. Still, he had an inconsistent summer last year and had just one outing this spring. A hard slider is his best secondary pitch, and he receives good reviews for his maturity and makeup.

Why the Phillies took him here: Well, it took 15 picks, but Abel is the top high school pitcher selected in this draft. Abel is an Oregon State commit who looks every bit the part of an elite starting pitching prospect. He has a lanky build and touches 97 mph with three above-average pitches. Coming from the Pacific Northwest and without playing a single high school game this year, he has thrown fewer pitches than many other pitching prospects in this draft, which also makes it tougher to evaluate him. The bet here is on Abel growing into an elite starting pitcher -- names like Jack Flaherty, Stephen Strasburg and Justin Verlander come to mind as absolute best-case potential here -- but the chances of him getting there are slimmer and it is going to take a while.  [espn.com]

MLB.com's Jim Callis is also quite high on Abel. While he recognizes the risks in taking a H.S. pitcher so early, he believes the Phillies got "a potential steal" in the young right and could see a huge payoff for being the first team willing to take that risk on Wednesday night.

No one knew when the first high school pitcher would come off the board, and it’s here, with the Phillies getting a potential steal in Abel. He didn’t get a chance to pitch this spring because his season was cancelled before it started due to the coronavirus, but he’s polished for a prepster and has plenty of stuff: a fastball that can climb into the upper 90s, perhaps the best slider in the prep class and a promising changeup as well. Teams are skittish about the risks involved with high school righties, but this could pay off huge  [mlb.com]

Some of this analysis (specifically the latter part) was clearly written before the pick was made, but it's interesting that they were projecting Abel to be a potential Top 5 pick. Normally, a player sliding that far would be a cause for concern, but the reason appears to simply be a lack of scouting causing hesitation by the teams ahead of the Phillies, which plays into Callis' argument that the Phillies got a steal in the first round.

Abel went 15th despite the pandemic wiping out his season, and preventing teams from taking additional looks. Based on their past observations, Abel has a chance to be a high-quality big-league starter. He has a tall, lean frame that ought to support muscle gain over the coming years; he's a good athlete who can repeat his delivery, boding well for his command and control; and his arsenal includes three flowering pitches: a lively fastball that can bump the upper-90s and a slider and a changeup. The top of this class is loaded with good college arms, so Abel might slip outside of the top five. Whatever team gets him should be thrilled.  [cbssports.com]

We were only able to find two draft grades as of the this writing, and not only do they both come from the same outlet, but they also happen to be the same exact grade. (We'll update this if we see any other grades floating around out there.)

His 6'5", 190-pound frame has plenty of room to fill out, and he is already up to 95 mph with his fastball. He backs that with a slider that is one of the best breaking balls among this year's prep arms and a changeup with plus potential. His floor is higher than those of most high school pitchers, and he could easily wind up being the best hurler in this draft class.  [...]

The Phillies have a top-heavy system, and there's not much in the way of high-ceiling pitching talent beyond Spencer Howard and Francisco Morales. That said, given their current window of contention, the more MLB-ready Jared Kelley might have made more sense if they wanted to go with one of the top prep arms.  [bleacherreport.com]

The 6'5" high-schooler hit mid-90s early in his career, and he's been on the radar as a first-round pick ever since. His three-pitch arsenal contributed to making him the first high school arm selected in the draft. The righty out of Oregon has high upside but may take some time to meet his potential.[bleacherreport.com]