Phillies call up top prospect Spencer Howard, who will start Sunday vs. Braves 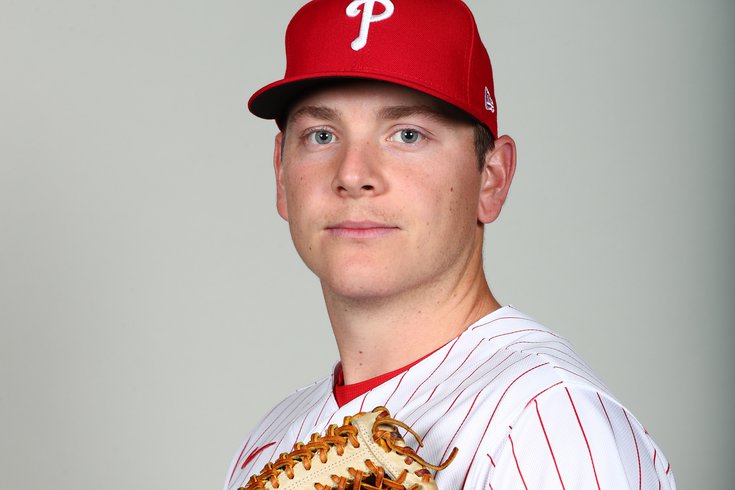 Philadelphia Phillies pitcher Spencer Howard is so new we don't have any better photos of him.

UPDATE [Sunday, 4:15 p.m.] — The Phillies have officially called up top prospect Spencer Howard to start the second game of their doubleheader against the Braves (they lost the first game, 5-2).

Phillies have made the following roster moves: pic.twitter.com/gxkHVOEpVZ

It's finally happening. According to multiple reports, the Phillies are expected to call up top pitching prospect Spencer Howard to start one of Sunday's two games against the Braves.

Here's more from The Inquirer's Scott Lauber, who was first to report the news on Saturday morning:

After days of dropping hints but holding off on an announcement, the Phillies have informed their top pitching prospect that he will be called up from the satellite camp in Lehigh Valley to start one of the seven-inning games in Sunday’s doubleheader against the Atlanta Braves at Citizens Bank Park, according to a source familiar with the situation.

Howard’s first major-league start has been anticipated since the final month of last season and represents as ballyhooed a debut for a homegrown Phillies pitcher since Aaron Nola in 2015 and perhaps even Cole Hamels in 2006.

The Phillies needed to expand the rotation this weekend after Zack Wheeler and Nola started Wednesday’s doubleheader against the New York Yankees. Now that Howard is here, he figures to stay, given the likelihood that the team will require a sixth starter to help cover the half-dozen doubleheaders left on the schedule.  [inquirer.com]

Ahead of Saturday's game against the Braves, manager Joe Girardi had the following to say...

So, yeah, unless the Phillies have another young right hander with the initials S.H., it's safe to say Howard will take the hill on Sunday.

Howard, the No. 36 prospect in all of baseball according to MLB.com, has the stuff to pitch in the majors, and likely would've joined the Phillies earlier — and probably would've made the 30-man roster when the team broke camp last month — had it not been for some service time manipulation on the part of the Phillies, who gained an extra year of control over the 24-year-old starter by delay his big-league debut at least the first six days of the season.

"If Spencer Howard isn’t starting in our rotation by Game 6 in New York against the New York Yankees, there’s a problem," Bryce Harper said on Twitch last month. "That’s all I’ll say."

Of course, then the Phillies season started ... and stopped ... and then started again, throwing the rotation of and not really giving the team a reason to call up their top pitching prospect any sooner. But with rain postponing multiple games in addition to their COVID-induced break following their opening series against the Marlins, the Phillies are finding themselves playing more than a few doubleheaders, forcing their hand and providing an avenue for Howard to make his debut.

Howard, who throws four pitches including an upper-90s fastball, and a nasty changeup, likely won't officially be called up until Sunday, as the Phillies have a game on Saturday night and will need to make a corresponding roster move to create room for him. But once he arrives, he's likely not going anywhere.

Whether or not that means he finds a permanent home in the starting rotation or lands in the bullpen — where the Phillies could certainly use the help — remains to be seen. Here's more from Todd Zolecki of MLB.com:

Howard could stay in the rotation following his debut, bumping somebody else to the bullpen. But it is possible that he makes a spot start Sunday and moves into the bullpen. Howard has not pitched out of the bullpen in his career, but his arm would play. The Phillies also have five more doubleheaders on the schedule after Sunday, meaning they will need a sixth starter again.

“I think there’s a number of different ways that we could use him, whether it’s starting or relieving,” Girardi said.

But once Howard is up, he will stay up.  [mlb.com]

The baseball season may not have gotten off to the start Phillies fans had hoped for, with their team currently sitting at 3-4 and having played half as many games as the rest of the league, but Howard's debut provides a boost — and another reason to watch, something he should continue to do for years to come.

After all, thanks to that service time manipulation, he's under team control until 2026.