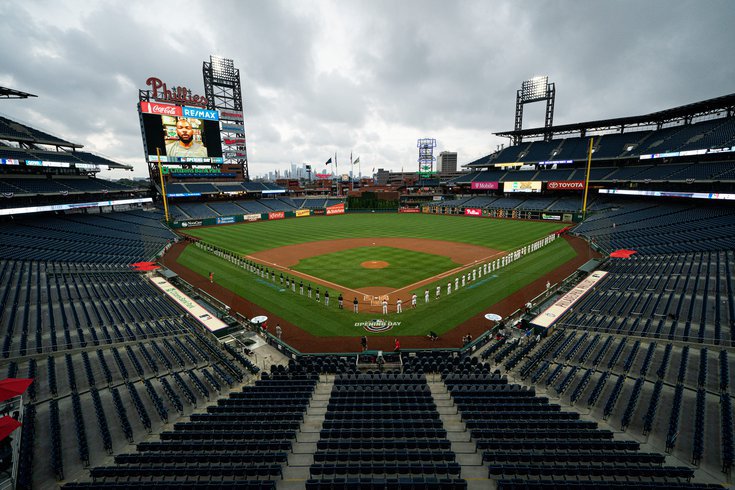 Gregg Murphy has been a field reporter covering the Philadelphia Phillies since 2012. After 20 years at NBC Sports Philadelphia, he was among group of people impacted by layoffs at the local sports station.

Longtime Philadelphia Phillies broadcaster Gregg Murphy and Eagles insider Derrick Gunn were among several employees of NBC Sports Philadelphia impacted by round of heavy layoffs at NBC Universal, according to reports.

The latest cuts come a day after notable national writers with NBC Sports, including Craig Calcaterra and Rob Dauster, were let go amid the financial fallout of the coronavirus pandemic.

Murphy, who had been with NBC Sports Philadelphia for 20 years, told the Inquirer he had been let go while he was off-the-air dealing with symptoms of COVID-19. He had been part of the Phillies broadcast as a field reporter since 2012 and was a favorite among fans.

Murphy is expected to complete the Phillies' coronavirus-shortened season once he recovers from his illness.

Gunn spent more than 20 years with NBC Sports Philadelphia and has been a fixture of the station's Eagles coverage. In a statement on Wednesday afternoon, Gunn confirmed the news and said he is optimistic about what the future holds.

It’s hard to say goodbye to yesterday ... but it’s time to move on ... pic.twitter.com/ZTRXgCoSKB

Seventeen NBC Sports Philadelphia staff members were reportedly among the NBC Universal layoffs, including senior director of communications Maureen Quilter. In a statement on Twitter, Quilter reflected on her time with the station.

Enrico Campitelli, longtime writer for The 700 Level, said Wednesday he was also part of the layoffs, as did Sixers writer Paul Hudrick.

After 10+ years, my time at @NBCSPhilly is ending as part of layoffs across NBC Sports.

Know of an amazing team in need of a top-notch utility player: MBA/writing/strategy/social/biz dev/digital/consulting — open to all industries. Hit me.

Other big names at the station, including Al Morganti, also were named by sources who spoke with Crossing Broad.

It’s hard to say goodbye to yesterday ... but it’s time to move on ... pic.twitter.com/ZTRXgCoSKB

Regional NBC Sports networks in Boston and Chicago also were hit with layoffs, according to reports. Former NBC Sports Philadelphia anchor Leila Rahimi was among those let go in Chicago, where the station's "Sports Talk Live" show has been canceled. In Boston, as many as 20 staffers were let go.

The Philadelphia Business Journal reported that NBC Universal could lay off up to 10% of its 35,000 employees. Parent company Comcast Corp. said last week it had suffered a 25% decline in revenue as a result of theme park closures, postponed movie releases and dwindling advertising sales, particularly from the canceled 2020 Olympics.

This weeks cuts also extended to NBC 10 and Telemundo 62, but it was not immediately clear whether any on-air talent had been let go by either station.

As the sports world continues to reel from the uncertainty of the pandemic, NBC Universal's digital assets — including Hardball Talk, College Basketball Talk and College Football Talk — also reportedly have "met their demise," according to The Big Lead.

Prior to this week's layoffs, NBC Sports Philadelphia employed approximately 140 people. Some of those included in the layoffs will reportedly complete their contracts through the end of the respective seasons they cover.