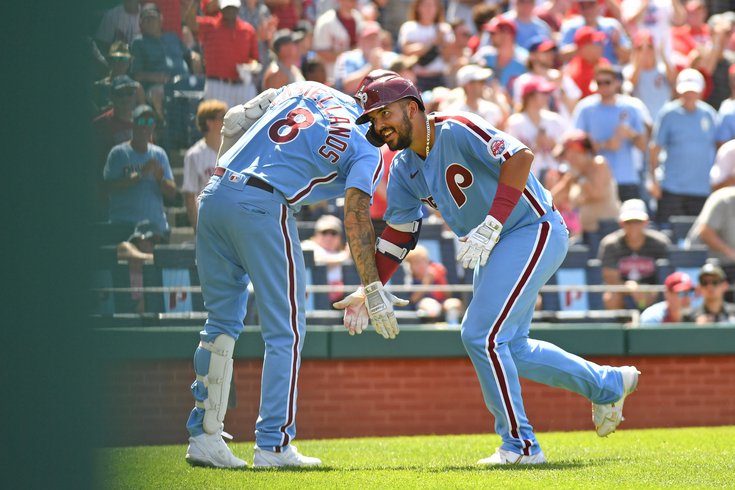 The Phillies offense is firing on all cylinders.

If the Phillies want to end their postseason drought — the second-longest one in Major League Baseball, currently at 10 Octobers and counting without playoff baseball — they need to beat up on the bad teams on their schedule, of which there are many.

They did just that this weekend, taking four out of four from the last place Nationals in dominating fashion. Philadelphia out-scored Washington 36-12 in the series, giving them a tiny bit of breathing room in the NL's Wild Card race.

Here's a look at some things we saw in the series:

• First, the playoff picture, which sees the Phillies in the 5-seed for the first time with a half game edge over the re-vamped Padres and two games clear of the Brewers. Being 12 games above .500 — the high water mark for the year — is a nice place to be and the Phillies are the hottest team in baseball, winners of 10 of their last 11. Incredibly, they're also just three games behind the Braves for the first Wild Card spot and second place in the NL East.

• The Phillies' offense combined for 14 homers in the series sweep against the Nationals, 3.5 of them per game. It's a franchise record for a series of any length. That's a wild pace to expect a team to maintain, and obviously they'll be facing much better pitching when they play the Mets next week, but just for fun, we calculated their home run pace based on their sweep of the Nats — and a 567 home run output would set a new Major League record by 150 home runs.

• Speaking of home runs, Rhys Hoskins has been so red hot it's not really possible for him to be hotter. He hit a homer in each of the four games against the Nats, had six RBI and added a pair of walks and hit by pitch. Hoskins has been up and down this season, but he's accumulated 24 homers with a slash line of .253/.344/.496.

• Nick Castellanos basically won two games by himself last week. First, in Atlanta, he slammed a late two-run homer in a tie game as the Phils won the rubber match against the Braves. A day later, he caught a fly ball and threw out a would-be tying run at the plate in the opening game against the Nationals, a game that would be called after five innings due to weather. He hit a two-run homer a day later in a 7-2 win over Washington and added another RBI in the third game as well.

• How are the deadline dudes doing so far? New centerfielder Brandon Marsh, acquired in a trade deadline deal is hitting .300 in the early going for the Phils. The biggest concern with the acquisition of one of the better defenders in the league was his hitting, and he's shown to be a boost late in the lineup so far. The other bat acquired is Edmundo Sosa, who collected an RBI in the only hit he's had in four official at bats.

David Robertson has pitched two scoreless innings so far including a big save in Atlanta. He wasn't needed much against the Nationals. And finally, Noah Syndergaard did what had to be done to eek out a win in the series opener as he allowed four runs in five frames.

• We've mentioned it in previous posts but it will be extremely interesting to see what happens to current DH Darick Hall when Bryce Harper returns. The 26-year-old power hitter has been revelatory during his 29 games with the Phils, blasting eight homers and hitting .282. He added a pair of long balls in the 13-1 drubbing series finale Sunday a day after going yard in Saturday's 7-2 win.

If Harper does indeed return to play right field, it will leave a puzzle for manager Rob Thomson as he will try and get his best bats on the field. One of Hall, Castellanos or Schwarber would likely have to ride the bench as one would play left field, one would DH, and the other would not have a place on the field. Would the Phils be willing to keep Hall on the roster despite his lack of value defensively? (He has played first base in the minors, but he's blocked there too by Hoskins).

• Lost in the offensive explosion of the series win over Washington is the near prefect performance of Gibson, who did not allow a base-runner Friday night (for all to see on Apple TV+) until he hit Victor Robles with a pitch in the top of the seventh. He gave up a single a hitter later but turned a double play to escape that frame with a shutout intact. He gave up a run on a sac fly in the eighth but earned one of the most impressive wins of the season from the mound.

• The Phillies can continue to pad their playoff margin as the Marlins come to town Tuesday after a rest day on Monday. Zack Wheeler opens things before Syndergaard has a brutal matchup against Cy Young front-runner Sandy Alcantara on Wednesday. Thursday will see Gibson looking to follow up the best performance of his Phillies career.

Following the Marlins, the Phils will have an odd paring of home and away series against a contender in the Mets, and one of the league's worst in the Reds. Philly will play at New York and at Cincinnati before hosting the Mets and Reds in the two series following. After their second series against New York ends on August 21, they won't face another team with a winning record until September 16.