MLB trade grades roundup: Are the Phillies a deadline winner?

Brandon Marsh, Noah Syndergaard, and David Robertson should be enough of a boost to get the Phils to the postseason 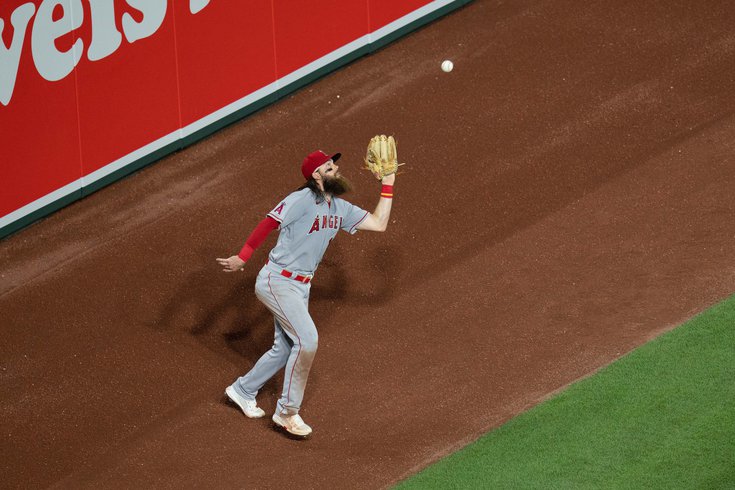 Outfielder Brandon Marsh fields a fly ball for the Angels. He was traded to the Phillies on Tuesday at the deadline.

The Phillies approached the trade deadline in need of fielding, bullpen depth, and a middle of the rotation starter.

August 2 came and went, and the Phillies left it with Edmundo Sosa and Brandon Marsh (fielding), David Robertson (bullpen depth), and at the last minute, Noah Syndergaard (starting pitching).

Did they make the biggest splash of the deadline? No. That honor goes to the Padres for landing Josh Hader, Juan Soto AND Josh Bell.

But the Phils are a bit better than they were yesterday – you know, before they got trounced by the Braves 13-1 – and with Jean Segura and Bryce Harper working their way back, the postseason should very much be within reach.

"I think we're in a position where we really shape up to be a good club," team president Dave Dombrowski said following the 6 p.m. ET deadline on Tuesday. "But you have to go play hard every single day and continue to battle. We've been doing that and I anticipate that we'll continue to do that."

So how did the Phillies ultimately grade out? Let's take a look...

The Phillies did pretty well for themselves. They improved their roster and did so without having to give up any of their major prospects.

But they could've done better and didn't make up much ground on the Braves or even the Cardinals, who are battling them for the third and final NL Wild Card spot.

From The Ringer's Michael Baumann:

The Phillies traded from the tier of prospects below their anointed troika of young right-handers to fill in some roster gaps. Syndergaard isn’t the pitcher he was five years ago, but the Phillies have money to burn and a Zach Eflin–shaped hole in the rotation, so he should be useful. Robertson is a reliable reliever for a team in need of quality innings—his first injury-plagued stint with the Phillies is about the only period in the past 14 years in which he wasn’t a very good eighth-inning guy or closer. The Marsh trade makes more sense knowing what came later—Odúbel Herrera was DFA’d minutes after news of Marsh’s arrival broke, and Moniak later went to the Angels in the Syndergaard deal. Marsh is only a career .239/.299/.354 hitter and just 18 months removed from being a global top-50 prospect. He doesn’t have to be much better to represent an upgrade on Herrera. (His defense is already superior to Herrera’s.)

The Phillies did pretty well, and didn’t give up any prospects with which they’ll regret parting. But if anything, they lost ground to the Braves and Cardinals. A bigger upgrade in the rotation or center field would’ve been nice. (Could the Phillies have somehow hijacked both ends of the Bader-Montgomery trade? No, of course not, they’re not the Pirates.) Particularly because if the Mariners’ acquisition of Castillo pays off, guess which team will suddenly own the longest playoff drought in MLB? [The Ringer]

A gift on the schedule

There's what the Phillies did Tuesday and then what the Padres' blockbuster trade did for them. Soto and Bell are both out of the NL East now, and the Phils have 11 games left to play against a completely gutted Nationals squad, the most out of any team in the NL Wild Card hunt – The Cardinals, for example, only have four games against Washington.

Advantage Phillies and disadvantage Cardinals and Giants. Any team can beat any other team on any day in this game, but if I were fighting for a postseason spot, I know I'd feel better if I had 11 -- 11! -- games remaining against a rebuilding team that just traded its two best hitters and is presumably checked out for the season.

(Also, shoutout to the Phillies for landing Brandon Marsh, David Robertson and Noah Syndergaard in sensible trades. They upgraded their roster considerably, and designating Odúbel Herrera and Jeurys Familia is addition by subtraction.) [CBS Sports]

The Phillies' deadline moves were pretty favored over at Yahoo Sports.

The Brandon Marsh and Noah Syndergaard acquisitions for Logan O'Hoppe, Mickey Moniak and Jadiel Sanchez graded out at a B+ for the Phils, and getting David Robertson from the Cubs for pitching prospect Ben Brown came in as a steady B.

The Phillies didn’t have the luxury of time. They need someone who can capably man center field right now, and Marsh can do that. It’s a creative solution from the Phillies' front office. Marsh is a young player only 163 games into his MLB career — it’s surprising the Angels moved him — who will be more valuable playing center than he was flanking Mike Trout. He strikes out way too much, but packs enough punch (eight homers so far this year), to plug into a lineup every day if he’s playing good defense. [Yahoo Sports]

Finally, there’s Syndergaard. The longtime Mets star will return to the NL East fracas after a post-injury sojourn in Anaheim. He doesn’t have the strikeout stuff of his earlier days — his fastball runs about 94 mph and his once-daunting slider is neutered at 84 mph — but he’s using his sinker and changeup to miss barrels and post some solid results. If I were the Phillies, I’d be worried that his 3.83 ERA won’t hold up amid regression and less pitcher-friendly confines. Then again, they didn’t give up much to get him, so it’s a chance worth taking. [Yahoo Sports]

For the rest of the season, Robinson is as good a bet as any to provide effective innings late in the game. His fairly steady track record, when healthy, should provide some reassurance to a Phillies team that seems to keep stumbling into the worst years of every relief pitcher’s life. [Yahoo Sports]

Former baseball exec Jim Bowden shares much of the same sentiments towards the Phillies' deadline haul, also handing them a B+ over at The Athletic.

The moves may not improve the Phils enough to catch the Mets or the Braves, Bowden writes, but they should be enough for a shot at a Wild Card berth.

The Phillies had a strong deadline, improving their defense up-the-middle with the acquisitions of center fielder Brandon Marsh and shortstop Edmundo Sosa, the middle of their rotation with Noah Syndergaard and the back end of their bullpen with David Robertson. They landed Marsh in a prospect-for-prospect deal. Logan O’Hoppe was blocked by J.T. Realmuto, and it made sense to swap the 22-year-old catcher for the 24-year-old Marsh, who could develop into their long-term answer in center field. Marsh has not lived up to expectations offensively, but he has much more upside than he showed with the Angels. Sosa improves their infield defense, and Syndergaard and Robertson are significant upgrades to the rotation and bullpen, which are performing well but needed reinforcements. Collectively, these moves give the Phillies a much better shot at securing the final NL wild-card berth, but it’s not enough to catch the Mets or Braves. [The Athletic]

Phillies president Dave Dombrowski made it clear heading into the deadline that the goal is to get his club to the postseason, and after Tuesday, he made the final additions that should help get them there.

Noah Syndergaard, David Robertson, and Brandon Marsh were all acquired on deadline day to aid the Phillies' push for a playoff slot in the National League that didn't even exist before this season. This was one of the objectives of the new format, to entice teams to be in a more win-now mode. If Dave Dombrowski ran every team, it wouldn't have been necessary. Love it or hate it, the guy always keeps it interesting.