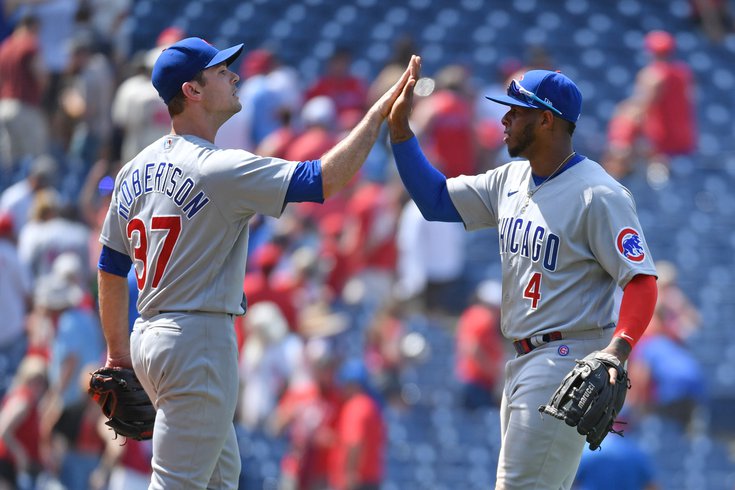 Could a David Robertson reunion bolster the Phillies' bullpen depth?

UPDATE [5:50 p.m.] — The Phillies appear to have landed on a starter. With reports linking them to everyone from 42-year-old Rich Hill to Giants ace Carlos Rodon, the Phils pulled the trigger to acquire Noah Syndergaard from the Angels.

Syndergaard will presumably slot in as the Phillies third starter with Zach Eflin shelved for the foreseeable future.

We'll have much more on this story as it develops....

UPDATE [4:20 p.m.] – Dave Dombrowski is still on the hunt for starting pitching.

Per The Athletic's Jayson Stark, the Phillies have spoken to the Red Sox about Nathan Eovaldi and Rich Hill, and the Giants about Carlos Rodón to follow up Susan Slusser's report from earlier.

The Angels' Noah Syndergaard is still on the radar as well.

The Phillies have now added David Robertson and Brandon Marsh, but continue to shop for starting pitchers.

Sources say they've talked to the Red Sox about Nathan Eovaldi and Rich Hill, and to the Giants about Carlos Rodon. And still in conversation with the Angels on Syndergaard

The Phillies are still in need of a middle-bottom of the rotation starter, especially now with Zach Eflin on the 60-day IL.

Pitching prospect Ben Brown is going to Chicago in return, per The Athletic's Matt Gelb.

Ben Brown is going to Chicago in the David Robertson trade, sources said.

UPDATE [3:49 p.m.] – With the clock counting down to the deadline, the Phillies made a deal with the Angels to acquire outfielder Brandon Marsh, per The Athletic's Ken Rosenthal and FanSided's Robert Murray.

Catcher prospect Logan O'Hoppe is going to Anaheim in return.

Phillies acquiring OF Brandon Marsh from Angels for Double A C Logan O’Hoppe, source tells @TheAthletic. On it: @ByRobertMurray

Marsh, 24, is a left-handed bat hitting .226 with a .637 OPS in his second major-league season and has a defensive WAR of 0.6, which is a boost to a Phillies outfield lacking in defensive prowess.

UPDATE [3:05 p.m.] – The Phillies appear to have interest in Giants starter Carlos Rodón, per the San Francisco Chronicle's Susan Slusser, this after she reported that the Giants are talking to teams about offers for the 29-year old lefty.

It sounds as if the Phillies have interest in Rodón. And yes, the Giants are pursing them in the wild-card race. Also the Twins, Cardinals showing interest still.

This does *not* guarantee anything will happen. They’re not looking to give him away. They would want full value.

The Giants trail the Phillies by 4.5 games for the third and final NL Wild Card spot, and while very much in the postseason picture right now, are one of the handful of teams faced with the decision of going for it this year or look to build a more stable future.

Depending on the return for Rodón, they may opt for the latter.

He would definitely be a boost to the Phils' rotation behind Zack Wheeler and Aaron Nola, especially with Zach Eflin hitting the 60-day IL.

Any word on Syndergaard?

UPDATE [12:25 p.m.] – It isn't the Phillies news we've been waiting for, but a trade that will undoubtedly shake up the NL playoff picture and the future of the NL East.

Juan Soto AND Josh Bell are being moved to the Padres, per MLB Network's Jon Morosi. The Nationals will be getting a bevy of players and prospects in return.

Sources: #Padres and #Nationals have agreed in principle on a Juan Soto trade, with Josh Bell also going to San Diego. @MLB @MLBNetwork

At 58-46 as of Tuesday, San Diego holds the second NL Wild Card spot and is two games up on the Phils, who hold the third.

Now, they'll be adding one of baseball's best hitting first basemen and one of the best outfielders of the past several years, all with star shortstop Fernando Tatís Jr. working his way back from injury.

Slam Diego may have just gotten a whole lot fiercer.

Washington, meanwhile, at the bottom of the NL East at 35-69, is fully committed to a rebuild having just shipped out its biggest star. And that could be a huge benefit to the Phils with 11 matchups left against a club completely bottoming out, as The Inquirer's Scott Lauber noted.

Yes, the #Phillies are vying with the Soto-enhanced Padres for a playoff spot. But they have 11 games left vs. the Soto-less Nationals, including a four-game series this week. Since 2018, Soto batted .300/.431/.579 with 18 homers in 67 games against them.

UPDATE [9:38 a.m.] – The Phillies scouted Seattle lefthander Marco Gonzales' start in New York Monday night, per The Athletic's Jayson Stark and Matt Gelb, but there doesn't appear to be any real traction there yet.

The Angels' Noah Syndergaard, according to the two, is the Phils' top target.

A clear sign Phillies are trying different ideas as starting pitchers go off the board. Syndergaard still believed to top their shopping list

Gonzales might be a backup plan of sorts with starting pitchers flying off the board. Frankie Montas, who started for Oakland against the Phillies back on Opening Day, was dealt to the Yankees and Pittsburgh's José Quintana was sent to St. Louis.

Against the Yankees on Monday, Gonzales was tagged for three homers and six earned runs in 5.1 innings of a 7-2 Mariners loss.

Today is the day.

A lot of teams have made some splashy moves, but none of them have been the Phillies, who have sat back and let the trade market develop for starting pitching.

Their patience may have cost them a chance at some of the league's top-line starters, but there are still some names available who could help Philly vie to end its decade-long postseason drought.

Jays are making a play for to bring back Noah Syndergaard @jonmorosi mentioned Phillies and Braves as well. @_bkuh_ also mentioned Jays

He has a second year of team control left for 2023 when he'll be arbitration eligible.

Syndergaard is another NL hurler and a familiar name to Phillies fans from his time with the Mets. The oft-injured starter has a 3.83 ERA over 13 starts this season with the Angels. He has shown he can pitch like an ace, collecting an impressive 2.93 ERA over his first 87 appearances for New York, but his Tommy John Surgery in 2020 has him looking a little less like a Cy Young contender lately.

Those two appear to be the leading names on the board for the Phillies, who would also no doubt love a chance at Carlos Rondon should the Giants elect to sell today too.

We'll keep you posted on all the latest rumors and developments in this space today, and also with our live stream and open thread just below: