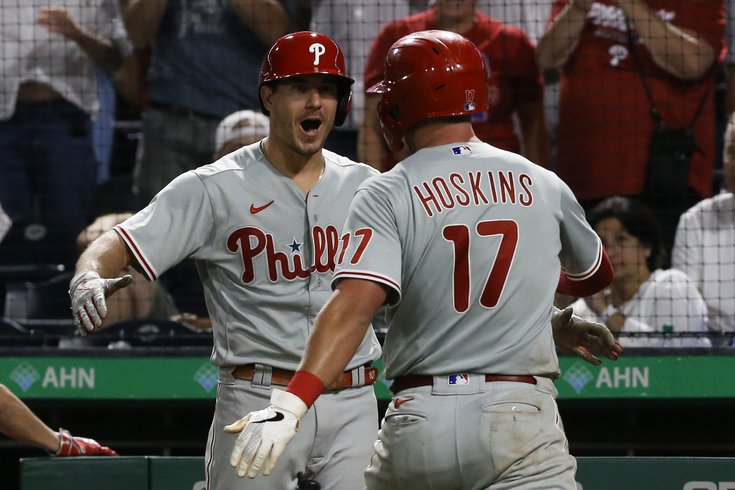 A little sweep action out in Western Pennsylvania! The Phillies won every matchup in their four-game set with the Pirates over the extended weekend series. At 55-47, the Phils are a season-high eight games over .500. Here's how things played out:

• Thursday: 8-7 win the Phils barely held on to after allowing five runs in the bottom of the ninth.

• Sunday: An oh-so-relaxing 8-2 win to cap off the weekend in style.

A few notes on the Fightins as they sit in the third and final Wild Card spot in the National League:

Talk about clutch! Rhys Hoskins has always had power at the plate, but has been marked by frustrating inconsistency during his Phillies career. When he's hot though, he's "Philly in late July" hot. Hoskins totaled at least one hit in every game of the series. The biggest of all, obviously, was his game-winning two-run home run in the top of the 10th on Friday night:

Phils have won 4 of 5
pic.twitter.com/JfXsgq2gaI

I've said it a million times this summer, but, at minimum, one Phillies bat needs to be on an absolute hot streak for the squad to tread water with Bryce Harper still sidelined. Hoskins did his part this weekend (as did the next guy I'm going to discuss).

Alec Bohm is back full throttle. Bohm had four hits in Sunday's win alone, including this solo shot:

Is this dude about to win National League player of the month?

For some completely unknown reason, Odubel Herrera just simply stopped running on the base paths after Kyle Schwarber crushed an extra-base hit to right field on Friday night with the team trailing 2-0:

Kyle Schwarber makes it a one run game! Not sure why Odubel Herrera stopped running pic.twitter.com/y9MVEko3Kc

It should've been tied up at 2-2, but the Phils were still down 2-1 due to Herrera's complete mental lapse. That guy sure knows how to endear himself to the fan base!

Good on interim manager Rob Thomson for chewing him out afterwards. It's something that Joe Girardi wouldn't have said a peep about.

Bryson Stott is hitting a putrid .198 on the season as the Phillies struggle to get any semblance of competency from their middle infielders, but, hey this place he made in the field was pretty sweet: