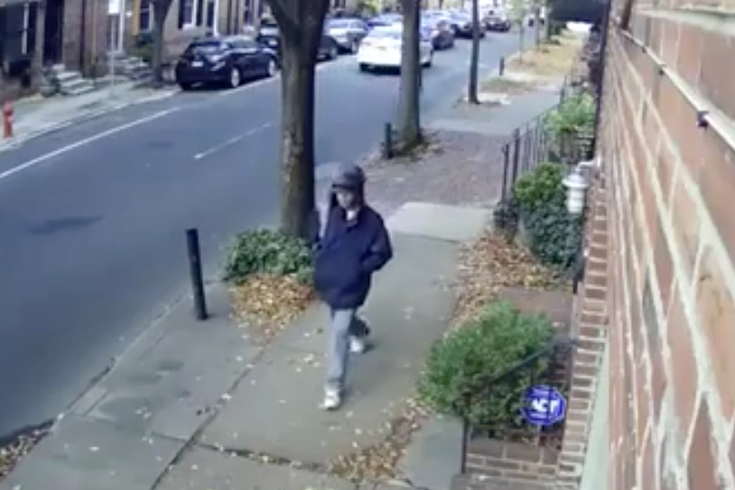 This image taken from a surveillance video shows a person of interest in the investigation into the package bomb that injured a Center City man on Nov. 23, 2016.

Law enforcement officials released surveillance images of a suspect they believe dropped off a package bomb that exploded inside a Center City apartment late last month.

At a press conference Thursday, officials announced a $10,000 reward for information leading to an arrest and conviction in the bombing.

There is still no motive for the bombing, and the victim, James Alden, said he does not know the person of interest based on surveillance images he has been shown, Philadelphia Police Commissioner Richard Ross said.

Police still believe Alden, 62, is the victim of a targeted attack.

"The fact that it was actually addressed in the mail to the victim, we believe that it was targeted to him," Ross said. "We talked to him extensively and he has no idea who would want to harm him in that way. Right now, that's all we have."

Alden suffered injuries to the chest, face and hands when the explosive device detonated as he opened a manila envelope he mistook for his asthma medication. The explosion occurred around 4 a.m. on Nov. 22 — two days before Thanksgiving — on the 1800 block of Pine Street.

Surveillance footage shows the suspect dropping off the package around 9:30 a.m. on Sunday, Nov. 20, Det. Timothy Brooks said. Multiple videos show him appearing in the area of Seventh and Pine streets and later disappearing around Seventh and Lombard Streets.

"He goes to the person's house, drops the package off on the step," Brooks said. "It is then delivered inside the victim. The individual then leaves the area and walks down."

Surveillance images show the suspect wearing an "Elmer Fudd" style hat over a baseball cap and carrying a large bag with the device inside, Brooks said. The suspect's jacket appears to have a rip or tear on the lefthand side. The individual was wearing blue jeans and white sneakers.

Officials are not sure of the person's gender, but he or she is of Asian descent, and in his or her late teens or 20s, and possibly as old as 30. DNA tests on evidence collected from the crime scene are ongoing, officials said.

The suspect may not necessarily be the person who manufactured or constructed the bomb, officials said.

The device itself, which investigators termed an "improvised explosive device," is still being tested at a lab run by the federal Bureau of Alcohol, Tobacco, Firearms and Explosives.

Investigators believe the bomb was homemade, ATF special agent Sam Rabadi said. He declined to discuss the specific composition of the device, but previously said it was constructed to denoate upon the opening of the envelope.

But Rabadi said the device is unlike anything he's seen during his 16-year tenure in Philadelphia.

"We haven't really seen this particular type of device anywhere in this entire region, on the east coast," Rabadi said. "It does concern us. But, as the commissioner stated, I don't want anybody out there thinking there's some random person delivering these things.

"That's not what we believed occured here. There was a specific target." 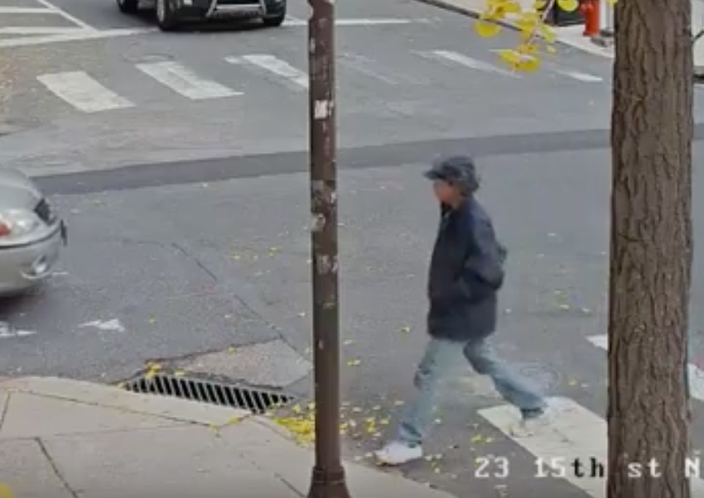 This image taken from a surveillance video shows a person of interest in the investigation into the package bomb that injured a Center City man on Nov. 23, 2016.

Alden, the target, is an active member of Philadelphia's LGBT community who is "open about his orientation and political views," according to a YouCaring fundraising page raising money to cover his medical bills.

Police stressed they do not have a motive, but said they are investigating all potential motives, including the possibility of a hate crime.

"What's imporatant is that this package was addressed to the victim," Chief Inspector Joe Sullivan said. "The device within that package was designed to be activated when the victim opened that package. It is still our belief, with the evidence that we have in front of us today, that this particular victim was targeted."

Alden lives with a 32-year-old partner who was unharmed by the explosion. Alden has worked at the Warwick Rittenhouse Hotel since the mid-1990s and has performed in local theater and cabaret productions.

The online fundraiser has generated more than $19,000 to help Alden cover medical costs. Although he has health insurance, the price of medical copays and being away from work are straining his finances, according to the fundraising page.

The case is being jointly investigated by Philadelphia police, ATF, U.S. Postal Service and the FBI.

Anyone with information on the case is asked to call 215-686-TIPS.