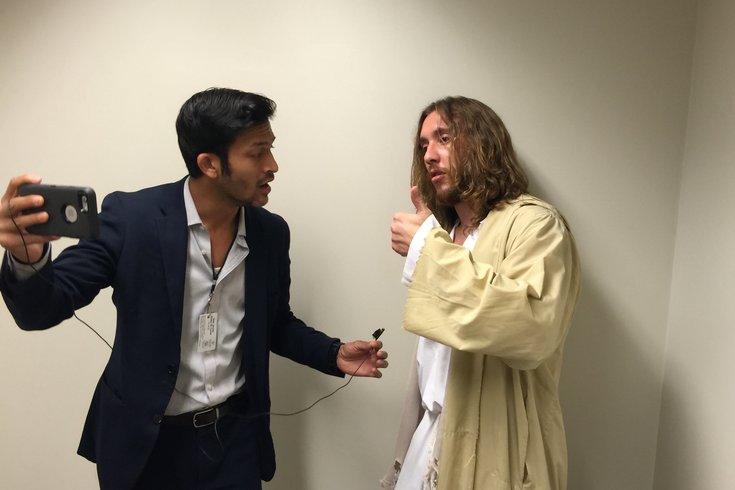 After being found guilty of defiant trespassing in connection with a May 2, 2016 incident at the Apple store in Center City, Michael 'Philly Jesus' Grant said he loves his enemies but plans to appeal the verdict.

Instead, after learning Wednesday that he’d been found guilty of violating the man’s law that holds thou shall not defiantly trespass in a Center City Apple Store, the deity also known as recovering heroin addict Michael Grant spoke about love, forgiveness and his plan to appeal the verdict.

“I’m innocent,” he said in a small room near Courtroom 903 when asked about Philadelphia Municipal Court Judge Craig M. Washington’s decision, which also cleared him on a disorderly conduct charge in connection with the highly covered May incident. “I forgive him. I love my enemies. I love everybody the same. … [Now] I’m going to the ‘Love Center’ to spread the love.”

While nobody in the room asked for clarity on what, exactly, the Love Center is, the impromptu 1:45 p.m. news conference marked the end of an unusual day at the Criminal Justice Center.

With his brown robe flowing and iPhone (and earbuds) tucked away in a pocket, Grant entered the room around 10:30 a.m. with no sign of the 7-foot cross that represented the reason he was there in the first place.

Setting the stage for the nearly three-hour case ahead was a defendant in another case, her arms hidden under her shirt and already complaining about the judge not being in the room yet. (“Tell the judge to put that joint down; he can get to that later,” she said loud enough for bailiffs to hear. “I’ll go back there and get him myself. I have a doctor’s appointment today.”)

“Love your haters. Love your enemies. Pray for them, and bless up." – Michael Grant, aka "Philly Jesus"

The Philly Jesus case itself stemmed from a May 2 confrontation inside the Apple Store at 1607 Walnut St. in Center City after the “street preacher” allegedly bared his cross in a fashion that blocked aisles and disturbed employees and customers.

Grant did not testify in his defense – others in the room laughed aloud when he stood up at one point – the lone witnesses were store manager Shawn Dobbs and arresting Officer Michael Levin. (Grant said he wanted to testify, but his lawyer advised against it for purposes of an appeal).

Dobbs, who noted that he’d seen Grant in the store “many times before,” explained the store’s loitering policy permits asking people not there to conduct business to leave, something he alleged had happened with the defendant several times in the past.

That day went down a little differently than normal, though, because Grant’s cross was leaning against a display table and blocking an aisle on a particularly busy day.

“I asked him to please move the cross, ‘I need you to help me out today,’” Dobbs testified. “ ’I’m not going to leave today,’ I believe those were his exact words. He was very aggressive, interrupting what I was saying, within arm’s reach. I said the store’s too busy. We can’t do this today.”

After taking leave of Grant for about 10 minutes, Dobbs testified that he returned to reiterate that message, but the immaculate object had not budged. Per Dobbs, Grant said that he wouldn’t leave the store unless he was in handcuffs. 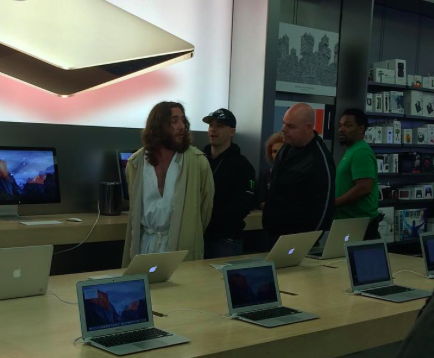 By that point, a crowd started to gather with other customers taking pictures and videos of the scene. Commerce had come to a halt – including that of a “young couple” to whom Dobbs was trying to show an “11-inch MacBook Air” right next to the cross – though no evidence of lost profits was presented in court.

“He began to yell about religious freedoms, his right to religion, that he could be there as long as he wanted to be,” testified Dobbs, who said he soon summoned police. “It was distracting. He was yelling and screaming.”

Levin backed up Dobbs' testimony, saying he told Grant that he’d be locked up for trespassing if he didn’t comply – not once, but twice. After the second warning, “I said, ‘You’re locked up.’”

Both Grant and his cross were then taken away from the Apple Store by the authorities.

On first blush, the case seems simple enough: Man is told to leave the store and when he doesn’t, he’s arrested for trespassing. But Ziegler, the defense attorney, had two major points of contention.

First, the cross itself was not brought to court to serve as visible evidence of the allegations that it impeded customers’ freedom of mobility. The second was the fact that the Apple Store only turned over a limited amount of video footage from inside the store that day.

He argued against both charges on the grounds that his client thought he was exercising his religious freedoms by being in the store with his cross, and raised his voice to push back against that perceived violation.

“He thought he was being persecuted because of his cross,” the attorney explained.

The judge seemingly bought that version of events in dismissing the disorderly conduct charge.

But in finding Grant guilty of defiant trespass – the charge not as heavily argued against by Ziegler during the proceedings – Washington sentenced him to three months of probation (one month of that reporting probation) and to pay court costs and fees estimated around $400. The prosecution had sought nine months while the defense though Grant had already been punished enough.

Both Grant and Ziegler, who did a “superb job” according to his client, said an appeal will be filed within the required 30-day window. He will seek a jury trial next time around.

Asked if he planned to go back to the Apple Store, Grant told reporters, “Of course, I’m an Apple customer,” adding he would bring his cross with him next time.

Then, he was asked for closing statements.

“Love your haters. Love your enemies. Pray for them, and bless up. God is good, all the time,” he said. “As I age, I will age into Philly Moses.”

Alas, he didn't say when he planned on parting the Schuylkill River, so stay tuned for that.