Philly parklets aim to blur line between street and sidewalk 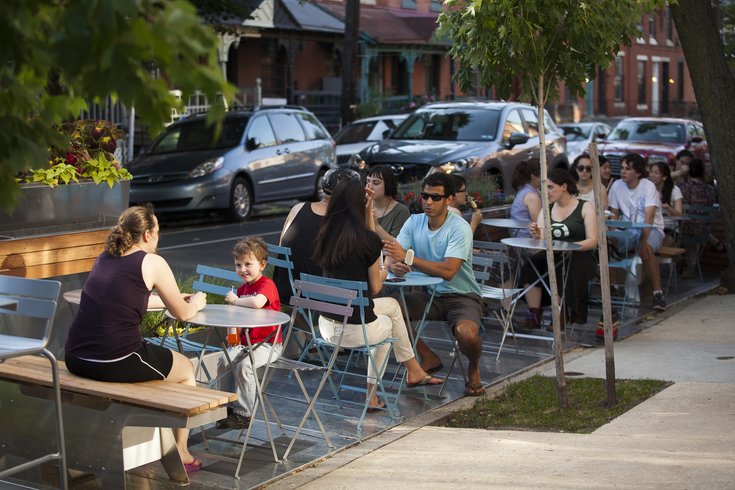 Let's start by addressing this upfront: What, setting aside any and all urban-planning-speak, is a parklet?

Ask the Pennsylvania Horticultural Society, and they'll call it a small garden. Ask a neighborhood association, and they'll cite a rejuvenated vacant lot (like "Dickinson Grove"). Ask the city of Philadelphia, and you'll get -- true to the city's evergreen reputation for head-banging specificity -- a thoroughly detailed response: Any two-parking-spots-occupied space taken over by plants and public seating, set 32 feet from a block corner not marked by a crosswalk and never in a zone with a speed limit of more than 25 mph.
As you might imagine, the latter stands as the Final Jeopardy-winning answer.
Look, the root concept of parklets -- those rectangular, outdoor lounge areas that pop up for street residency between April 1 and Nov. 30 -- is hardly new. Gaze over any Italian plaza, and you'll take in a social scene akin to what parklets are claimed to cultivate. What is new, however, is how cities like Philadelphia -- which, it should be emphasized, is among those actually leading the way on this one -- are reclaiming the social-seating concept and adapting it for concrete-jungle legacy blueprints like ours. In Philly's case, planners can't exactly drop Bart Blatstein's Piazza in every neighborhood with a need for social space -- but, it is feasible to drop 20 (or more) feet of modular seating space, typically made of aluminum in recent iterations, atop the occasional parking spot.
And, as it turns out, a minimal loss of parking could make way for some major gains -- for both businesses and the average street-dweller.

Philly's obsession with outdoor seating didn't start with parklets. In truth, the very idea is relatively new for a city that not too long ago was cooped up indoors when not waltzing about Rittenhouse Square.
Most illustrative of this is a report issued by the Center City District in September: It found that, in 1995, there wasn't one cafe with outdoor seating; today, there are 369 outdoor cafes that dot the downtown space between South Street and Vine Street. Forty-two of those outdoor spaces were added in the last year.
Parklets, then, are just the next step in an ongoing journey to reshape Philly's streetscape. 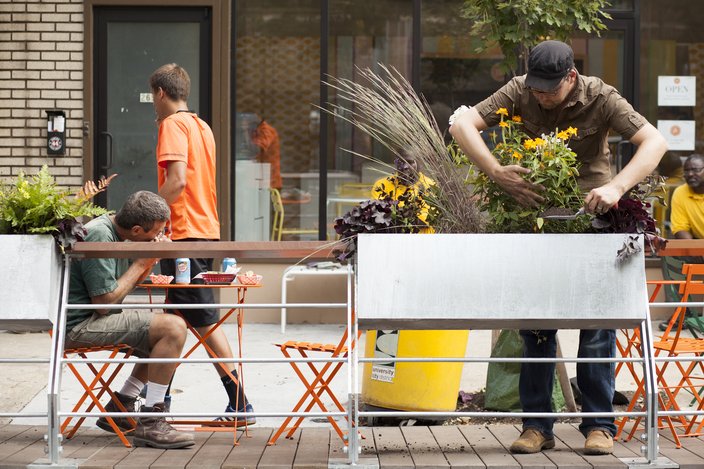 A sidewalk-facing view of the 265 S. 44th St. parklet, first implemented in 2011. / Ryan Collerd
The University City District, which has led the way in Philly's parklets efforts since allocating funds for a two-parklet pilot program in 2011 (consider it an on-a-whim experiment), documented the impact of the district's five parklets in a report issued earlier this month. Much is still to be gleaned about the impact of parklets on a grander scale (parklets are young -- San Francisco paved the way for them just five years ago), but early results unearthed by the district are encouraging.
The report found that surrounding businesses boasted an average sales increase of 20 percent over an eight-month period in 2013; parklet users were as often female as they were male; and, using Honest Tom's Taco Shop's adjacent parklet (pictured above) as a particular example, it filled 16 of 20 available seats during peak hours, with as many as 150 unique users in just one day.
"Just by taking those two spots, it turns the front of the store into what's like a mini-park – that's what it’s trying to do, and it does just that," Tom McCusker, owner of Honest Tom's, told PhillyVoice.com.
His role as the adjacent business, he says, is simply to keep the parklet clean and lock chairs after business hours. The rest is handled by University City District, which navigates the approval process with the Mayor's Office of Transportation and Utilities and the Streets Department. (They and others design according to city guidelines and with feedback from the community; the latter keeps parking complaints at bay.)
McCusker says the parklet's helped his business since its implementation in 2011 by freeing up space in his shop. In his first season, he says, he'd often have customers put in an order and crowd his tiny shop space. As a result, passersby would falsely assume he was swamped with business.
"Now, people walk in to order and walk out to the parklet -- it’s completely opened up our shop to nonstop business. People are more likely to be like, ‘Hey, let’s go get a burrito and sit outside – it’s nice.’ It doubled the amount of seating we had," he says. "And once it's there, people want it. Our customers will even ask when it's coming back."
Though parklets are not strictly for business patrons (they're meant for public use), they are -- by the nature of being sponsored by businesses and having tables -- popularly perceived as makeshift outdoor cafe areas.
Seth Budick, policy and research manager for University City District, told PhillyVoice.com that perception likely fosters the 20 percent boost in sales that serves as the key early indicator of parklets' success -- especially considering the parking spots, left in their native state, typically produce very little revenue for anyone.
"It's obviously a really powerful argument for parklets, especially because it’s a low season in University City. A lot of students take off around the time the parklets go in," Budick says. "And it’s even more interesting, because there’s been a few other attempts to get detailed numbers [elsewhere], and that 20 percent number pops up a lot. So, it seems like there’s support, more generally, emerging for that sales increase in that vicinity. That translates into increased sales tax for the city and other business-related taxes, too – there’s a benefit to the city.” 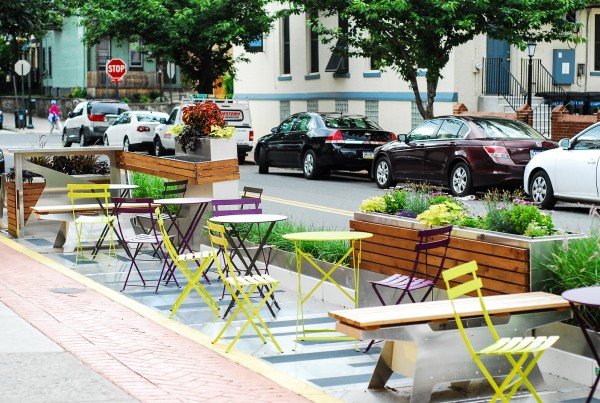 The 4040 Locust St. modular parklet is made of aluminum and accentuated with wood paneling. Planters are installed to take up approximately 18 inches of street-facing space that would otherwise be what the designer calls 'dead space.' / Shift Designs

Parklets are more than an obvious boon to business. They're also indicative of a larger trend toward urbanism and transforming spaces to be more engaging -- and new demographics taking back cities.

"The past four or five years are what I call ‘return to urban.’ Baby boomers, empty nesters and millennials are abandoning the sterility of the suburbs for the richness of cities, and they’re polishing these spaces," Harris Steinberg, executive director of the Lindy Institute for Urban Innovation at Drexel University, told PhillyVoice.com.

Philadelphia, he says, is ripe for this "polishing" -- a fine-tuning also reflected by efforts like PHS's beer gardens and 30th Street Station's "The Porch" -- because of its post-industrial makeup, university population and changing means of transportation.

It's ingrained in a larger narrative.

"Parklets are all part of that greater sense of, ‘How do we open up the public realm to the pedestrian and the cyclist, and not just leave it to the car?’" Steinberg says. "It’s an interesting time of transformational change, and I think outdoor seating is a key piece of that. You only have to go to the great plazas of Spain to see that we like to sit out and watch people."

Parklets, in particular, are part of a movement toward "tactical urbanism," he says. Translation: Low-cost and temporary approaches are being taken to alter a streetscape depending on the environment surrounding it. (The "temporary" bit finding success in this case, because parkers can still enjoy their space for four months of the year.)

It's also, he says, an extension of what urbanist William Whyte (fun fact: a West Chester, Pa., native) established decades ago, which is that making chairs movable -- not bolted down, like with a bench -- is a key function of making a space more engaging and moldable over time.

“It’ll be interesting to see if parklets become institutionalized. So, 'Who’s actually in charge of them?' In this case, it's UCD -- but they need a steward for long-term," he says. "Or, is this a transitional moment, in which case it’s ultimately about the public realm and what kind of investments we put into ‘shared streets’ – the Dutch are certainly doing that, and it's where the lines between the sidewalk, the street and their different uses become fuzzy.”

Trend, or Here to Stay?

“You certainly don’t want a parklet on every block," acknowledges Nate Hommel, capital projects manager for University City District and a designer of some of the district's parklet interventions. "But there’s also no reason why we can’t have 30, 40 or 50 parklets citywide. There are so many opportunities across this city."

Time will tell whether parklets stick around or evolve into something else entirely. Though, of the parklets that have been established since 2011, nearly all have come back for additional seasons. Cara Ferrentino, manager of strategic initiatives for the Mayor's Office of Transportation and Utilities, told PhillyVoice.com that all nine of this year's proposed parklets are returning from previous years, with about five newcomers expressing interest. One of those proposals, also for University City, calls for a parklet that's 65 feet in length -- what would be the largest parklet in the country, Mario Gentile, CEO of Philly-based Shift Design (its designer), told PhillyVoice.com.

There's also the matter that, last September, Mayor Michael Nutter signed an amendment to the Philadelphia Code that legally recognizes and defines a parklet, as well as establishes the Pedestrian Enhancement Permit -- a one-time, $125 fee for applicants.

In which case, parklets will be popping up for the forseeable future.

"I definitely see in our long-term efforts, now that we have PEP in place, where we’ll streamline our internal review process for parklets so that we can make sure that there’s always a clear way for concepts to move through internal review here," Ferrentino says. "It’s going well, but we want to make sure it goes well in case we continue to see increased interest."

Hommel, meanwhile, sees parklets as -- if absolutely nothing else -- a gateway to a larger dialogue about long-term interventions and how the public engages with public spaces, including amenities we already use every day, like bus stops.

"I think the goal here is that you find a space that is just so perfect for these kinds of interventions that you can use them as a way to say, ‘Maybe we can do a more permanent intervention at this location?’ And that’s the end goal," he says. "But even if it never happens, we love that parklets bring life to these spaces from April to December. And, hopefully, they can lead to bigger conversations.”