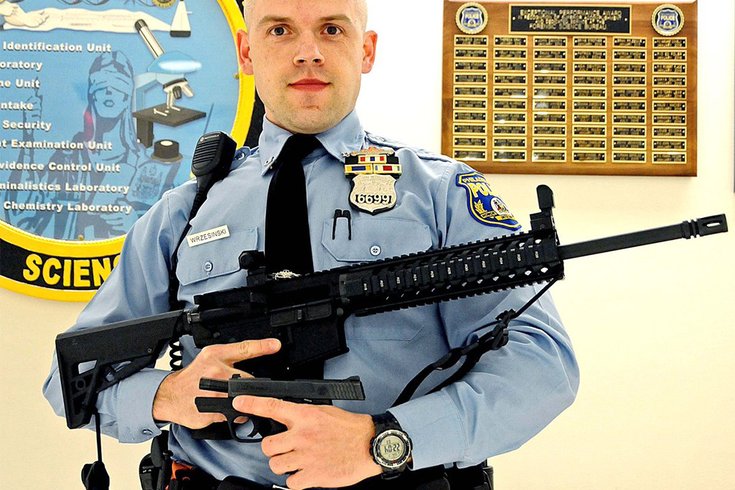 Philadelphia police Officer Krzysztof Wrzesinski made two arrests Saturday night in Northeast Philadelphia. A 12-year-old was taken into custody after he was spotted walking down the street with a loaded AR-15 assault rifle, according to police. An 18-year-old was arrested for carrying a loaded pistol, police said.

Philadelphia police arrested a 12-year-old boy who allegedly was walking around a Northeast Philadelphia neighborhood with a loaded AR-15 assault rifle. 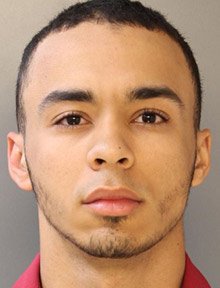 Michael Mitchell, 19, of the 2200 block of Kennedy Street in Bridesburg was charged with violating the Uniform Firearms Act and related charges, police said.

Police made the arrests Saturday after responding to a report of a person with a gun on the 2200 block of Kennedy Street in Bridesburg.

Michael Mitchell, 19, of the 2200 block of Kennedy Street, was charged with violating the Uniform Firearms Act – a third-degree felony.

He also was charged with five misdemeanors, including criminal conspiracy, terroristic threats, corruption of a minor and reckless endangerment of another person.

As of late Monday afternoon, police had not released the identity of the 12-year-old boy or announced any charges against him.

The Northeast Detective Division continues to investigate the incident.

On Monday morning, the police department tweeted a photo of the arresting officer – Krzysztof Wrzesinski of the 15th district – holding the seized firearms.

Saturday night, 15th District Officer Wrzesinski arrested two individuals for walking our streets with two loaded weapons. The AR-15 was being held by a 12 (yes, TWELVE) year old, and the Glock was in the hands of an 18-year-old. Parents: make sure your weapons are secured! pic.twitter.com/feEjc6jRg3