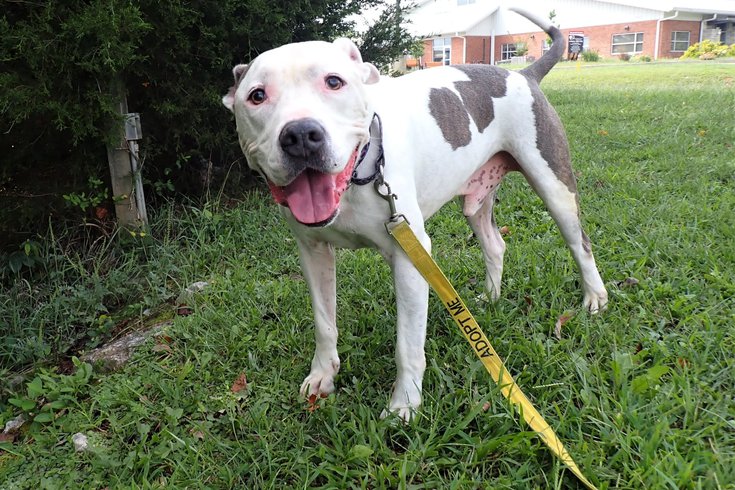 Bosco is described as a sweet and gentle pooch who walks well, loves riding in the car and always wags his tail. He was transported from Tennessee to the Philly region this week by Bella-Reed Pit Bull Rescue on a private plane after ground transportation plans fell through.

Along with eating, sleeping, playing and getting belly rubs, most dogs absolutely love to travel. The sight of a pooch sticking its head out a car window to let the wind flap its ears is awesome.

So it's safe to assume a dog that loves to travel in the car wouldn't mind flying on an airplane, too.

There might not be a better example of that than the incredible journey of Bosco, an 8-year-old pit bull who was flown this week from Tennessee to a Philadelphia-area rescue organization.

Bosco, who suffers from some vision impairment, had been at the Washington County Animal Shelter in Tennessee for several months without receiving any interest, according to WJHL-TV in Johnson City.

The dog's foster mom, Ashley West, reached out to more than 50 pit bull rescues across the United States and received interest from only one: Bella-Reed Pit Bull Rescue in Southeastern Pennsylvania.

Founded in 2013, Bella-Reed primarily focuses on finding new homes for pit bulls from the local area. But Bella-Reed said Bosco was too much of a "really special boy" to turn down.

However, ground transportation to bring Bosco to the Philly region fell through, leaving the organization in a lurch to figure out how to transport the dog.

Bishop enlisted real estate agent Jonathan Fink, of Fishtown, and his private plane to bring the dog to the Philly region.

Fink and Bishop flew together to Tennessee on Monday and brought Bosco back that same day. Bosco seemed to very much enjoy the flight to his new home.

Bella-Reed doesn't have a central kennel or shelter, so the organization uses foster homes across the region until the pit bulls find their permanent homes.

Bosco has settled in nicely to his foster home in Wilmington, Delaware, according to Bella-Reed. The dog has been eating, drinking and sleeping well since his arrival.

Bosco had an exciting day yesterday catching his private flight ✈ from Tennessee to Pennsylvania! He settled in at his...

Bella-Reed has begun taking adoption applications for Bosco, but the pooch will remain in foster care until at least Oct. 18. All rescued pit bulls older than six months must remain in foster care for at least 30 days while they are evaluated with people and other dogs. This is done so that the dog's needs can be fully understood in order to pair them with the right family.

Based upon his description, it sounds like Bosco would be a great addition for many households. Bosco is described as a sweet and gentle pooch who walks well, loves riding in the car and always wags his tail. He gets along easily with other dogs, but can be a little shy around new people.

His vision impairment isn't bad enough to cause issues, but Bosco does have a tendency to bump into door edges or fail to eat his treats right away, Bella-Reed said. Because of his vision impairment, Bosco's best fit might be with a family that has a lower energy dog and older kids.

For more information on the process to adopt Bosco, visit Bella-Reed's website.