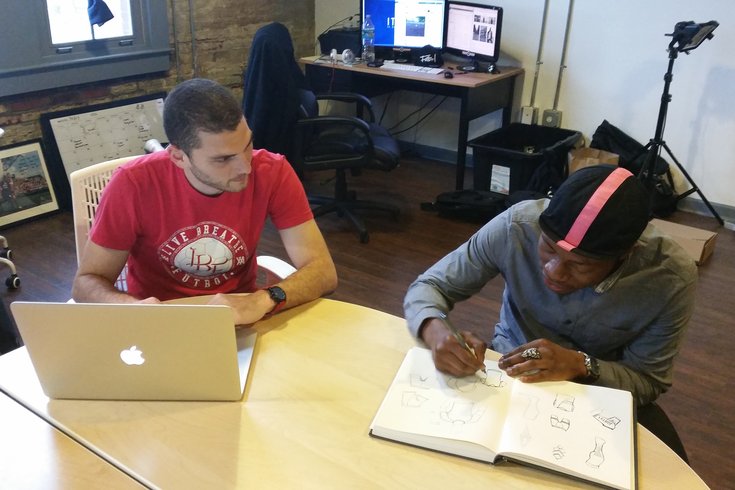 Ebun Olaloye and Domenick Cucinotta now operate from a shared workspace in a rehabbed Brewerytown warehouse.

There’s an empty lot across the street which sits adjacent to another building, this one vacant and covered in graffiti. Further up the street is a brand new housing development which butts up against a supermarket, café, and liquor store.

In a way, Brewerytown trends in the same direction as Live Breathe Futbol, the soccer-themed apparel company that was started by the pair of Temple graduates about five years ago. The burgeoning neighborhood and DIY business both seem to be in a transitional phase that does not have a finite endpoint.

"It was key,” said Olaloye of moving into the new workplace. “I think Dom gets the credit in advocating for this space. We used to live together in Northern Liberties. We always just did it from home. We realized that we're in our mid-to-late twenties now, and we have to really get serious about this, and kick on, and make this an actual business, and treat it that way. Because even though everything was setup on the back end, and incorporated, and all of that, it was just like, two guys in a house making stuff, you know what I mean?” 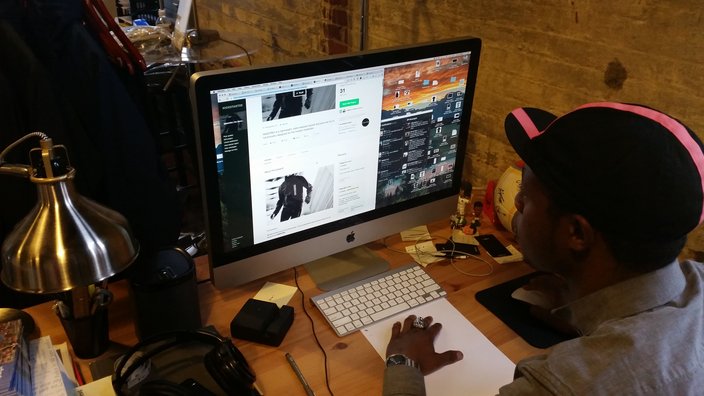 Ebun Olaloye goes over notes for the LBF 'Maestro' launch.

Think of this as LBF 2.0; it’s not just two kids slapping logos on a t-shirt anymore.


The brand has grown from local to national to international now, with customers in 52 different countries. The first line of 21 t-shirts evolved into full-fledged collections that included hats, scarves, hoodies, and tanks. Locals bought swag from the “LBF is Forever” and “Stay True” collections, and the grassroots effort blossomed in sync with the growth of the Philadelphia Union and the resurgent soccer scene.

Regional popularity probably crested with the debut of the “Rebels” collection in 2013. A launch party in Old City drew a massive crowd that was genuinely intrigued about the company’s most comprehensive offering to date.

"I was in Seattle working on the Rebels collection,” Olaloye explained. “It took me four months to put it together. To be completely honest with you, I didn't expect Rebels to take off the way it did. (The comedian) KSI was wearing it, and David Luiz, and Alexandre Pato, and it just went out of control. From a design perspective, I didn’t want to be that guy who says, 'let's just ride the wave, or beat the dead horse.' Something else had to come from that. People are going to expect a certain level of product. There were only so many times we could put a famous soccer player on a shirt. There are only so many ways to do that before people start wondering, 'what's the next thing?."

That next thing is a line called "Maestro", which is a multi-part collection that begins with a pant and jacket combination. This is new territory for LBF, which is trending away from simple aesthetics and refocusing on the concepts of form and functionality.

The jacket is waterproof and lined with mesh in strategic, high-perspiration areas. There’s a sleek facemask instead of a cumbersome hood, with offset zippers and fleece-lined thumb holes. 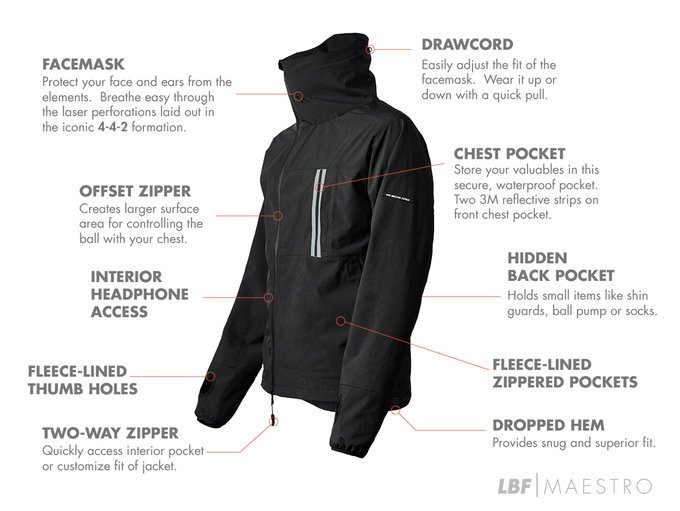 Live Breathe Futbol/for PhillyVoice
The pants include similar lightweight fabric, with a tapered fit and elastic cuffs around the ankle. Soccer players know that you can't have baggy and loose material in the ankle and shin area, and that's the point of the narrowing design.


Customers can order the new line through a Kickstarter campaign, and they can preview the gear at a Friday night launch party. Phase two of Maestro is a soccer bag with a small line of apparel coming out in the summer.

“The idea of LBF is where we're going now,” Cucinotta emphasizes. “Functionality was always where we were going. When we were starting out, we just couldn't begin with stuff like this. So we started with the t-shirts and other things that we had access to. I think going through the first two years, we knew that this is where we wanted to end up. This is where we wanted the direction of the company to go. You have Adidas, who does performance, right? Then you have other designs like Bumpy Pitch and whatnot, but there's no functional, lifestyle brand, and I think we fill that void.”

The pair sees “Maestro” as a natural evolution of the brand. After all, many ideas for LBF were spawned from pickup games on the turf fields at 16 th and West Norris Street. Cucinotta, for instance, recalls how students would show up to games wearing blue jeans. Those observations generated ideas in functional soccer wear. Other ideas came from personal experiences.

Either way, they knew where they wanted to be; they just didn’t know how to get there.

“We started this in college,” Ebun says. “You know where the story begins. The first t-shirt we made, the cotton was (crap), the print was terrible, and we had to pick up the shirts from some rinky-dink shop. It was all about learning the process and making the products we wanted to make. I designed the pants in 2012 when I moved to Seattle. That's when the first sketch came out. But I didn't know how to make pants. I didn't know about fabric, material, and functionality. So I had to learn those things. While I was learning that, the brand grew. So if we had come out with the pants in 2012, it wouldn't quite be the same. It's a lot more mature now, and people expect a certain level of product from us. We're finally at that place now.” 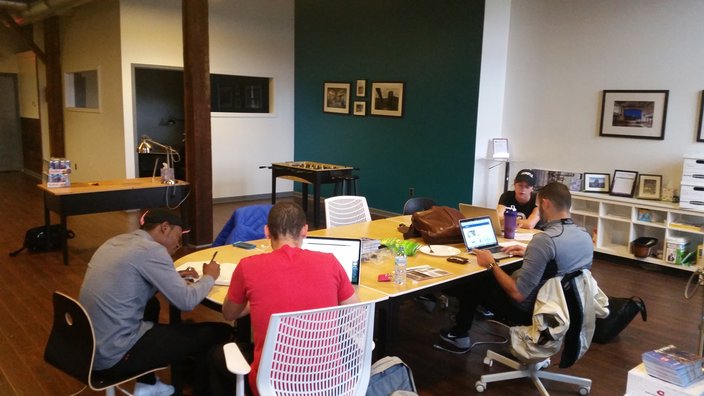 On the business side, the obvious challenges remain.


Inventory is still housed in the basement of Cucinotta’s parent’s house in Gibbstown. Foreign shipping is tricky. Space is limited, even in the new co-op building. The market for niche apparel is always going to be iffy.

But Ebun and Dom now have help from two part-time workers, who are lending their expertise to the business. They have strong relationships with existing customers, who get handwritten notes with each of their orders. Ebun points out that most buyers have his cell phone number, and that he develops a good rapport with purchasers.

In all of this, maybe the most important part is that they've finally found the time to sit down and actually think about the future.

“Before Rebels, it was just like, what are we doing next? What are we doing next?” Cucinotta recalls. “There was no real sit down, no long-term thought process. We started thinking we should take a step back and realized, 'we've really got something here'. We talked about where we would go, make a five-year plan, and open up our business and investor plan. I think that was an eye-opening thing, at least for me, after Rebels.”

“We did two collections a year and we thought about what players to put a shirt, or what color scarves we were gonna do, or what snapbacks are we gonna do," he says. "For me, it felt like we were putting soccer on a ‘parallel’, as opposed to infusing it with things that help us live this lifestyle. We wanted to make products that - I think the word is ‘enhance’ – to make that lifestyle easier. It was also about us being honest with ourselves and saying, 'look, it's time to grow, we can't make t-shirts forever'.”