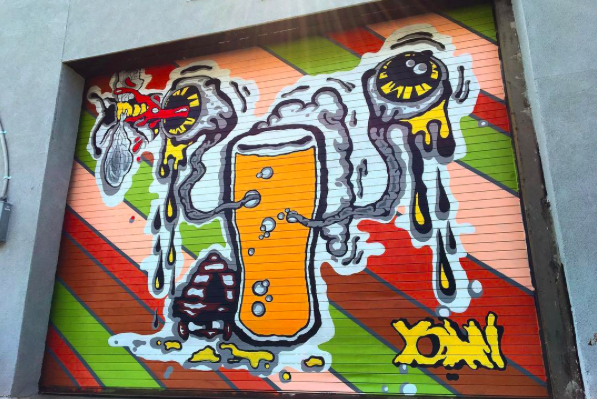 A well-known Philadelphia street artist is incensed with a group of "childish and disrespectful" taggers who defaced a mural of his outside a local homebrew shop in the Squirrel Hill section of Southwest Philadelphia.

Nikolay Milushev, aka YOMI, a Bulgarian artist who moved to Philadelphia in 2001, posted a pointed message on social media after a surveillance video revealed the trio of taggers spraying over his "Beer Monster" mural on the storefront of Philly Homebrew Outlet near 47th Street and Woodland Avenue.

Video of the incident was posted on Youtube on Oct. 9, though it was not immediately clear when the tagging occurred.

In an Instagram post on Monday, Milushev said he was doubly disappointed because the piece was commissioned and paid for by Philly Homebrew Outlet.

It appears YOMI's mural may not have been the only street art targeted by the taggers that night. According to West Philly Local, the glass storefront of Lil' Pop Shop at 46th and Woodland Avenue also was also scribbled over by the group, who appear in the video to be three young men in their teens or early twenties.

YOMI indicated in his post that the owners intend to report the suspects, but it's not yet known whether a complaint has been filed with police.