Philly to promote itself 'as a hub for startups' at SXSW 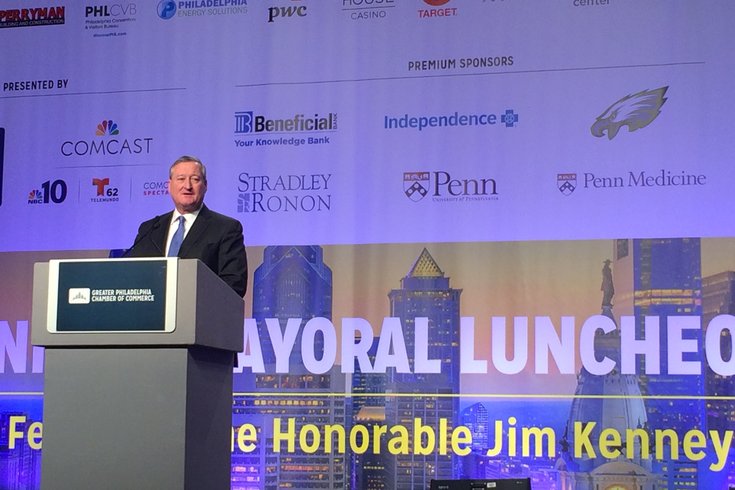 Mayor Jim Kenney talks business with members of the city's Chamber of Commerce during the chamber's annual mayoral luncheon on Wednesday.

In order to help "establish Philadelphia as a hub for startups," Mayor Jim Kenney said Wednesday that the city will, for the first time, have a formal presence at the annual South by Southwest Interactive tech conference in Austin, Texas in mid-March.

That was just one of the many things Kenney - addressing members of the city's Chamber of Commerce at its annual mayoral luncheon - discussed while highlighting a number of initiatives to spur business in the city. He also detailed how an improved business.phila.gov website will "serve as a one-stop shop to plan, launch and manage a business," he said.

As part of the chamber's Roadmap for Growth campaign – which Kenney helped to announce back in December –  the mayor discussed other business-friendly initiatives, including coaching programs to help business owners navigate the city's application process and an advisory board that will meet to help develop small businesses.

The new eCLIPSE system, now being used by the city's Department of Licenses and Inspections, will allow business owners to obtain licenses and permits online, he said.

It also enables the department to find tax delinquent properties. In fact, Kenney said, the eCLIPSE system has helped the city to collect more than $5 million in unpaid taxes in the past 13 months.

Kenney, who attended past luncheons as a councilman, told the chamber crowd that he was excited to address the group for the first time as mayor.

"For too long, this address was essentially seen as the mayor's to-do list for the business community," said Kenney. "But, if Philadelphia is to succeed, the relationship between government and business cannot be based on a list of demands, it has to be a true partnership."

The mayor said it was important for business leaders in the chamber to work together with the city and community to help grow the city's economy, which he termed a "shared agenda," because the city's economic health is "entwined in the fate of a mother who can't afford not to have quality pre-K."

"A shared agenda is important, not just because they are stronger together," he said. "It is important because when we don't work together, all of Philadelphia loses out."

Kenney said a plan for community schools that he's been promoting for some time would bring city services into district schools to support their students.

Just how this will work, Kenney said, would differ for each school, depending on needs.

While he didn't go into great detail due to time constraints, Kenney said that community schools are an idea that this city sorely needs.

"Community schools are a lifeguard that will save our students from drowning," he said.

Kenny also discussed an ongoing initiative for pre-K education in Philadelphia. He pointed to Chicago, where a pre-K program raised high school graduation rates about 29 percent. Having that here, he said, would help students face far fewer barriers to achievement throughout their lives.

Just what it will cost to implement a pre-K program, Kenney said, he plans to discuss that at an upcoming budget address in March.

"I'll answer that question in my March 3rd budget address," Kenney said. "But, the reality is, we can't afford not to do it."